Verdi
Macbeth – Opera in four Acts to a libretto by Francesco Maria Piave with additions by Andrea Maffei, based on William Shakespeare’s play [sung in Italian, with German & English surtitles]

This revival of Harry Kupfer’s 2018 production of Verdi’s Macbeth has Plácido Domingo in the role that he created back then, with the other principals being new. Just before curtain-up, on walked a chap to ask us, on the now-baritone’s behalf, for our indulgence because he had not been well over the previous days.

Kupfer’s staging, and Thomas Reimer’s backcloth video projections and Hans Schavernoch’s sets that go with it, is a narrative mess. Set in a burning wasteland of the near-future, the characters are dressed – if with very fine costumes from Yan Tax – in black military garb, very European. As King, this is more a minor-European Royal – a Grand Duke – rather than British. When Macbeth ‘sees’ the royal lineage of Banquo, there is a stately procession of British kings and queens, from Charles II to Victoria. Seeing those as the future flies in the face of the setting, as does the presence of the current queen’s royal coat of arms. It is an historical muddle. 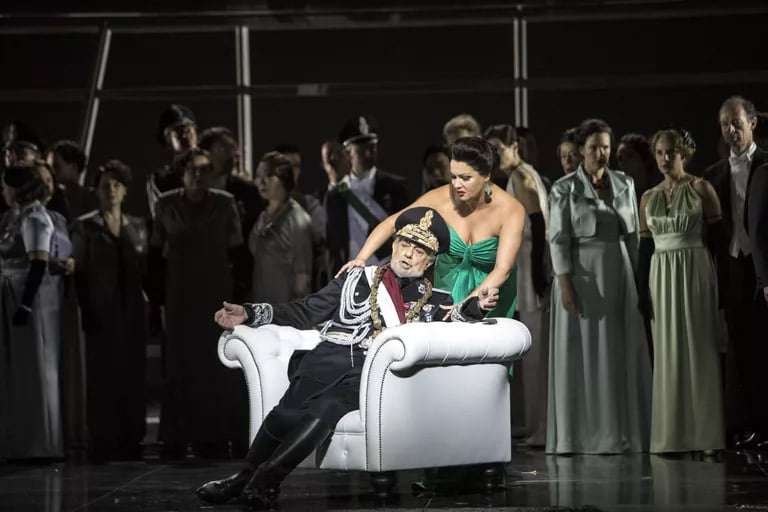 Domingo, now seventy-eight, wears his years very well: he has the bearing of a man in his forties. He gave awesome power and projection, but, crucially, very quiet singing, as during the introspective soliloquies, lending his characterisation the necessary tragedy of this fallen man. It was resigned fate in the end, and the cry of “Cielo!” (Heaven) upon learning that Macduff was not born of woman was anguish personified. It caps a great portrayal.

Ekaterina Semenchuk’s Lady Macbeth is at this level, too, it clear that she is the driving force behind all the misery. One knew she had read Macbeth’s letter many times, and plotted what must be done before she had even opened her mouth to express it, so determined and calculated were the first words, to chilling effect. Like a cat with a mouse, she played with the World around her, both with voice and actions. The ‘Sleepwalking’ scene was a terrifying standout.

The other roles are equally cast from strength. René Pape gives a dutiful, unquestioning in character, account of Banquo. Andrés Moreno García gives Malcolm’s orders to cut branches of Birnam Wood with great beauty – this is a noble duty – and similarly Sergio Escobar’s Macduff, heroic in his recognition of what must be done in slaying Macbeth. The Chorus is, throughout, a well-oiled machine, whether as refugees, witches and soldiers, and in the pit Daniel Barenboim and his excellent Orchestra. Through the pounding bass and brass of battle and murder, to the delicate woodwinds of dreams, the orchestral colour is wonderful and assured. What Barenboim achieves is a performance in which all parties – singers, orchestra and the drama – are welded together.