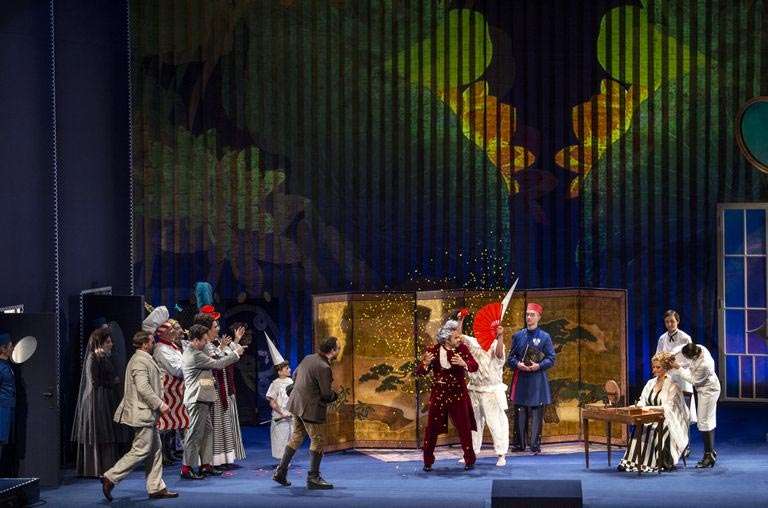 To stage Richard Strauss’s Der Rosenkavalier successfully one needs a steady and a judicious eye, and an ability to strike a balance between the often riotous ensembles and the work’s dominant conversation mode. It needs someone who can place the wistful melancholy of the Marschallin alongside the boorish lecherous buffoonery of Ochs without a perceptible gear-change, someone who can make a success of the great set pieces (the Presentation of the Rose, the great Act Three Trio) while giving due care and comic impetus to the caperings of the tavern ‘seduction’ scene. These are attributes that director André Heller, an Austrian artist, author, poet, singer, songwriter and actor (according to his Wikipedia entry) with no experience in opera whatsoever sorely lacks on the evidence of his new production for the Berlin State Opera, such is the sheer ineptitude of his treatment of the stage action. Everywhere it is clear that he simply hasn’t a clue, from the deeply unfunny ‘comic’ business, directed with a hand so leaden as to squeeze all life from it, to the utterly botched Presentation of the Rose, a scene which shows that he has not yet got to the chapter in the Opera Director’s Guide of placing singers on the stage to create maximum effect.

Consistency, at least, is achieved by stage and costume design of equally dismal quality. Xenia Hausner‘s blue padded and studded walls cover the stage boxes, and gantries jut out over the sides of the orchestra pit, but quite why we cannot tell, while her main stage settings are frankly bizarre, with the Marschallin’s bedroom dominated by giant flowered walls and Act Three set in an Art Nouveau conservatory filled with palms and a bedouin tent. Faninal’s house in Act Two is the most promising, with a Secessionist interior and a pseudo-Klimt frieze running along the back space, marred only by the fact that the walls were clearly not solid, and rippled as cast members walked behind them back stage. Most costumes were redolent of the 1910s, albeit often in eye-popping colours, and it was a nice touch to have Baron Ochs appear in full Lederhosen und Tracht to seduce ‘Mariandl’, but costume designer Arthur Arbesser was either encouraged or, at least, allowed, to go further, bringing in anachronistic dress shapes in Act Two and clothing the petitioners at the Marschallin’s levée as comic-book characters – the poor tenor Atalla Ayan (mellifluous of tone and sustained in his legato) was kitted out in full red velvet tails and an outlandish wig. The costume wooden spoon goes to the character of Sophie’s duenna Marianne (a vocally lively Anna Samuil) in a blue-and-black satin hobble dress and a black stove pipe hat – the latter miraculously left behind in the dressing room by the end of the act – although poor Roman Trekel’s both hideous and incongruous gold lounge suit as Faninal ran it a very close second. 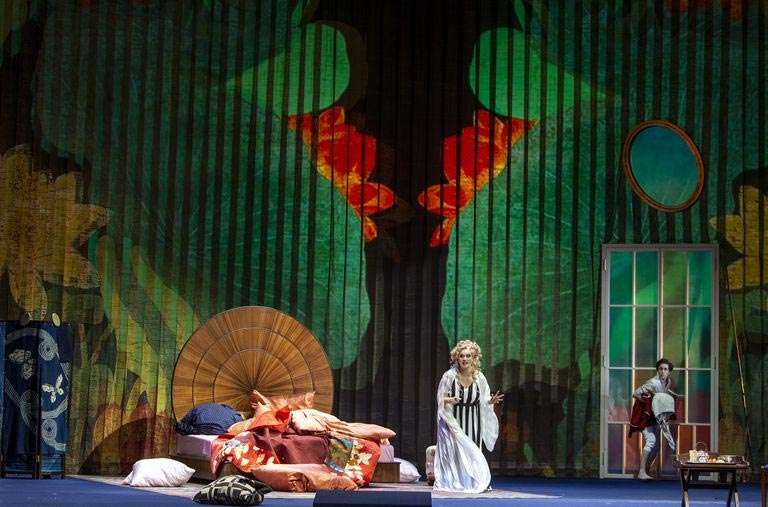 This new Rosenkavalier is a sorry sight and, to be honest, not a little boring when the action sags and there is little or nothing of interest going on; the Staatsoper Berlin is saddled with an evidently costly production which serves neither it nor the opera itself with any distinction; where it should be light-footed, it is simply ponderous.

Thank goodness, then, for the musical side led by Zubin Mehta who, in his eighty-fourth year, remains undimmed in his energy and musical taste. The Staatskappelle Berlin – celebrating its 450th anniversary this year – responded to his refined conducting with playing of the highest order, the ensemble on magisterial form and luxuriating in Strauss’s opulent scoring. The strings were lush, the heady scent of Attar of Roses, wafting among them, while the woodwind gambolled and skipped about in sprightly fashion. Mehta’s tempos were on the slow side, stretching out further an already long opera, lengthened by the opening out of traditional cuts to just shy of five hours. But such was the quality of this superb orchestra under the baton of a conductor it evidently reveres, that no negative criticism can be made on that front. 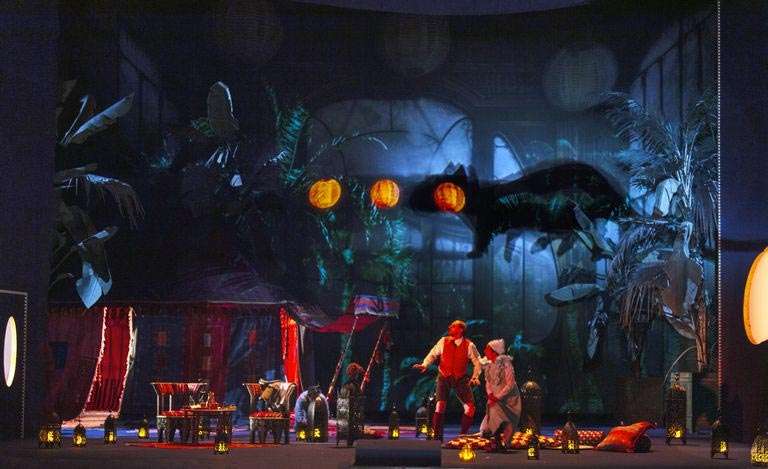 Camilla Nylund, overcoming a series of unflattering costumes with haughty imperturbability, gave a detailed and touching portrayal of the noble Marschallin who knows only too well the fleeting nature of life’s pleasures. The young Count Octavian is clearly the latest in a line of lovers who distract her from the passage of time which has robbed her of her youth and will soon take her beauty. In perhaps the only neat directorial touch, the image of her in bed after making love to Octavian, penned by him as the curtain rises on Act One, is picked up by her at its end and torn carefully into many pieces – there is simply no room for mistakes when cuckolding the Feldmarschall. Nylund was in sumptuous voice, pouring out one extended phrase after another, making pointed and intelligent use of the words and acting with ease in a portrayal of a woman not only of quality but of power and influence. Her Act One aria ‘Da geht er hin’ was a highlight of the entire production, Nylund drawing the audience in to sing almost confidentially about her fear of time and concentrating her voice to make it a barely uttered admission.

In contrast, the most ebullient, most adolescent of Octavians from Michèle Losier who struck a wholly credible figure as an impetuous seventeen-year-old youth, full of big emotions not always sure what to do with them. She has a full voice which she uses to effect, opening the vocal throttle to ride the orchestra at even its most expansive. Losier acts extremely well, even if one could not escape the nagging feeling that she, like the others, had been left very much to her own devices by a director evidently out of his depth. This Octavian cannot keep his hands off the Marschallin, or Bichette as he calls her, and then, when his eye has been drawn to Sophie, from her in turn. He thinks not of time and its passing but of the moment and, of course, himself; Losier cleverly and subtly indicates that the Marschallin’s exhortations for Octavian not to be like other men (like the levherous Ochs and the Feldmarschall) is unlikely to produce the desired effect. 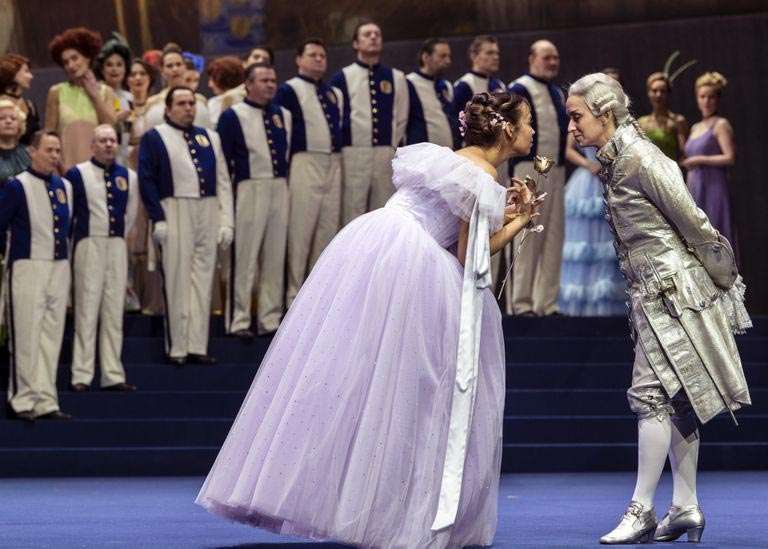 Günther Groissböck made for an unusually young and physically attractive Ochs, who nevertheless repulsed with his lecherous outlook and behaviour, all the more so, given some of the usual cuts to his excesses have been restored for this production. He has a fine, healthy voice, a nice ear for a thick Austrian country accent and a neat line in comic timing; his swaggering wide-boy baron is pretty awful, not least because of his casual abuse of all those around him. At moments Groissböck risked over-balancing the whole opera, such is his powerful stage presence, his evident ease in the character and, again, the lack, perhaps, of any restraining directorial hand.

Nadine Sierra was a grating Sophie both dramatically and vocally. Her Fraülein Faninal is not a pleasant individual who, despite being freshly out of the convent, takes to stamping her foot and playing petulant like the most appalling of Norinas in Don Pasquale – it makes it quite a shame that Octavian is so taken by such a girl, and one is not at all hopeful for their future life. In vocal terms Sierra does not possess the purity of tone which transports Sophie’s finest music onto the celestial plane, although she was effective in an impassioned Act Three Trio. Alone, as after the Presentation of the Rose, her tone does not support such exposed vocal lines.

Supporting singers, named and un-named, did their level best with the mess of a production around them, although it was a pity that the five singers of the Staatsoper young artists programme in featured roles were not given more help to develop their stagecraft and confidence – to leave inexperienced singers to their own devices is simply not fair on them.