Haydn
Symphony No.94 in G (Surprise)
Beethoven
Violin Concerto in D, Op.61
Mendelssohn
Symphony No.4 in A, Op.90 (Italian) 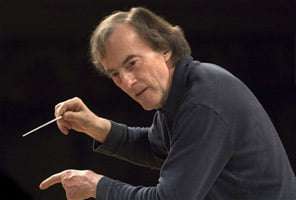 The final concert in the Berlin Symphony Orchestra’s three-part Cadogan Hall residency followed a similar format to its predecessors. Haydn’s ‘Surprise’ Symphony may be less often heard than was once the case but Lothar Zagrosek confirmed that, though it may be not be among the very finest of Haydn’s ‘London’ Symphonies, it is never less than pleasurable. He found an ideal accommodation between the expectancy of the first movement’s Adagio introduction and the exuberance of its main Allegro (not unduly energetic here), while the variation sequence of the Andante was informed by any number of ‘surprises’ other than that of dynamic contrast. Once again, the Minuet was affectionate rather than incisive – the trio ingratiatingly shaped into the bargain – before the finale saw the work home with an unforced effervescence, Zagrosek mindful to give timpani prominence in the approach to the coda.

The continued unavailability of Ernst Kovacic for this tour saw Berlin-born Sophia Jaffé stepping into the breach for Beethoven’s Violin Concerto. Most impressive here was a purity of intonation and an elegance of tone that were maintained throughout the work’s sizeable span, while her interplay with the orchestra had the poise of a born chamber musician and was ideally in keeping with the music’s spirit. Just occasionally in the first movement, a momentary lack of rapport suggested soloist and conductor were not wholly at one as to its underlying tempo (actually not unusual in this piece), with Zagrosek pressing ahead whereas Jaffé preferred to savour the moment in passages where Beethoven intensifies expectation prior to the return of the main theme – though there was little to find fault with in Kreisler’s cadenza that was unusually well-integrated into the movement as a whole. 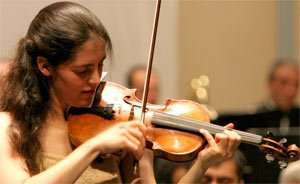 The Larghetto unfolded with evident appreciation of that easeful lyricism which characterises this most disarming of Beethoven’s slow movements in variation form, and here there was no mistaking the unity of purpose – Jaffé duly effecting a spirited transition into a finale whose robust manner did not necessitate any break in continuity with what had gone before. She enhanced this feeling with a cadenza (her own?) that went seamlessly into a coda that saw the work out in fine style. A stylish conclusion to a performance that was not strikingly individual, yet always satisfying on its own terms.

So, too, was Zagrosek’s account of Mendelssohn’s ‘Italian’ Symphony, though this brought a slight measure of disappointment after that of the ‘Scottish’ a few days earlier. Admittedly the work itself is partly to blame: although the two symphonies were conceived at much the same time, the ‘Italian’ took shape relatively quickly – Mendelssohn completing it in 1833 for performance in London. Other than a further hearing five years later, however, it seems not to have been heard again in his lifetime – the composer clearly aware that the piece as it stood lacked the overall unity required of a symphony (as recorded, his subsequent revisions bear witness to this quandary). Which did not prevent it from becoming among the most popular symphonies in the repertoire during the century or so after publication in 1851, or detract from the attractions of its individual movements today.

Zagrosek steered a secure if not overly perceptive course through the opening Allegro, though the omission of its exposition repeat meant leaving out the transitional music that Mendelssohn wrote for this purpose (surely a clear indication of his own feelings on the matter), and which in turn meant that the work made an unusually short second half – the more so given the length of the first half! The Andante had just the right balance between stoicism and lyricism (its ‘walking bass’ always evident but never intrusive), though characterisation in the third movement seemed a shade austere for one of Mendelssohn’s most alluring creations (evocative horn playing in the trio, though). The finale then made the most of the contrast between its saltarello and tarantella dance measures, the whole informed by a ceaseless momentum which saw the work through to an unequivocal close.