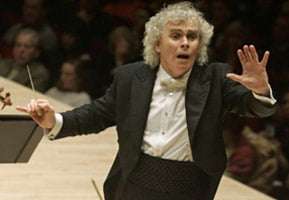 Arnold Schoenberg’s transcription of Brahms’s G minor Piano Quartet is the kind of work that plays to Simon Rattle’s strengths. Never mind Schoenberg’s claim that he adhered strictly to Brahms’s orchestral style; with its dense polyphonic textures and over-saturated orchestral hues, the arrangement is pure Schoenberg. The conductor reveled in the score’s kaleidoscopic detail, focusing the listener’s attention on countermelodies and odd, neon streaks of woodwind color, while simultaneously eliciting the most luxurious sonorities from the orchestra. Leisurely tempos aided this sumptuousness and also allowed Rattle the freedom to sculpt long, legato lines. The result was, perhaps, too refined at times. Those nervous repeated notes and breathless phrases that open the second movement Intermezzo, for example, were smoothed over and distended.

Yet there were splendid moments, too. Rattle’s exaggeratedly slow tempo for the central animato section of the slow movement gave it a soaring Wagnerian grandeur (of course, Schoenberg’s glittering orchestration contributed significantly to this impression). And in the fiery, gypsy-style finale, Rattle inspired stunningly brilliant virtuoso playing from the Berliners. It was exciting, to be sure, though rather lacking in playfulness and a sense of spontaneity, and that would have made this performance even more thrilling.

Rattle’s approach with Brahms’s First Symphony was not much different, but the effect was far more problematic. Nearly every phrase was played legato, and staccato markings were interpreted as tenuto, which rendered even the most jagged of phrases shapelessly smooth. As in the Piano Quartet, the orchestra played with an overwhelming and admittedly glorious lushness. Yet here it felt as if the players were focusing on quality of sound to the utter neglect of rhythmic energy and articulation. This was particularly damaging in the first movement, in which bite and grit are essential.

In the slow movement, Rattle fussed so much over details (dynamic markings, textural changes, balance) that the long line was completely lost. The intermezzo-like third movement flowed prettily but was under-characterized, offering little sense of bucolic respite. (Why, for instance, hide those delicious ornamental arpeggios in the clarinet behind the strings?)The finale started with a strong sense of dramatic purpose, and when that marvelous phrase in the horn emerged, it was as if from a primeval mist (shades of Wagner, again). But the main body of the movement failed to make good on the promise, progressing in a warm wash of legato. There was no sense of struggle, surprise, or revelation – which is, ultimately, what a great performance of this symphony needs to impart. And, frankly, it’s what one expects when the Berlin Philharmonic brings Brahms to Carnegie Hall.