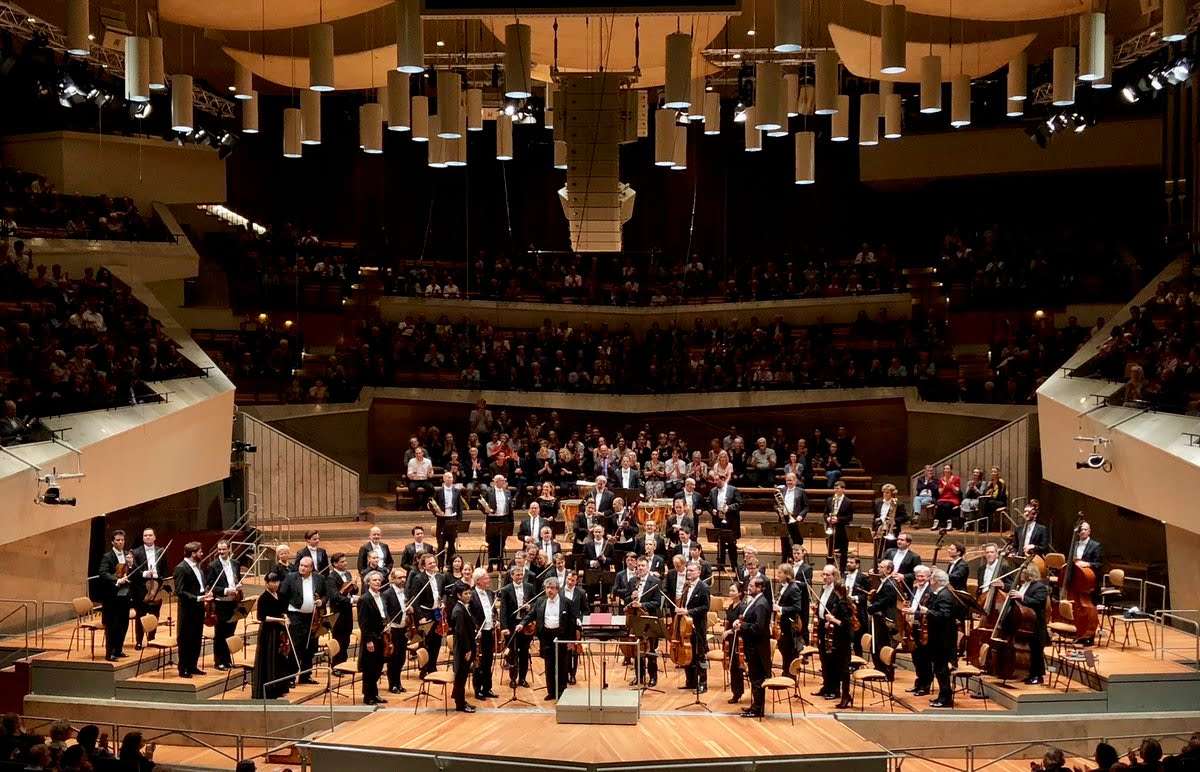 Semyon Bychkov often champions Detlev Glanert’s music, understandably so. Weites Land (Open Land, 2013) begins with a reference to the corresponding bars of Brahms’s Fourth Symphony (both composers born in Hamburg), an eerie mysterious start to a twelve-minute score that is filmic, dramatic and contrasting of mood and tempo, fully conversed here by orchestra (Brahms-type, no percussion save timpani) and conductor, the music’s ebb and flow, whimsy, and peaks and passion, fading to misty marshland and the simplest and very effective ending. Weites Land warmly received, Glanert was given a big cheer.

Arresting though its majestic opening is, Max Bruch’s Concerto for Two Pianos has no pretences beyond being enjoyable and well-crafted. The slow first movement has an ecclesiastical feel – somewhat Bachian, and would pass for Saint-Saëns – and its attached successor continues the mood, if now more romantically, until a jaunty Allegro turns up, delightful and shapely, woodwinds highlighted. The remaining two movements follow a similar pattern – the eloquent Adagio may well distil a forest legend, a dreamy tale to tell, of love perhaps, then an imposing Andante leads into a sure-of-itself Allegro, not without scintillation for the soloists. As ever with Bruch, he knows just how far his attractive material will stretch, and suffice to say that Katia & Marielle Labèque gave a stylish account, of sisterly togetherness, and Bychkov conducted with affection, the Berliners blooming and sonorous, the orchestration includes trombones.

However, to remove the Bruchian gloss the siblings then played (heroically) the final number of Philip Glass’s Four Movements – music that builds relentlessly, repetitively and oh-so-irritatingly until you can take no more; and, if you are me, much earlier than that!

Following the interval, Dvořák’s Magnificent Seven(th), soulful and hot-blooded music full of Czech characteristics and Slavic fervour. Bychkov, without denuding these qualities, went for an integrated symphonic approach, flowing and incisive in the first movement, beguiling too where it should be, and arrowed unerringly to the over-spilling climax. The slow movement, properly spacious, had its expressive nooks and crannies peered into; the Scherzo danced graciously, Bohemia pinpointed, the Trio airily turned; and the Finale was fiery and malleable (some nostalgic touches), resolute come the conclusion, the playing glorious, as throughout.

I recall Colin Davis being interviewed prior to conducting Dvořák 7 with the LSO. He was asked how much Brahms he found in the Symphony. “None” was his immediate and unequivocal response. So right, and maybe Bychkov would react similarly; certainly his conducting of No.7 suggests so. Dvořák is Dvořák.