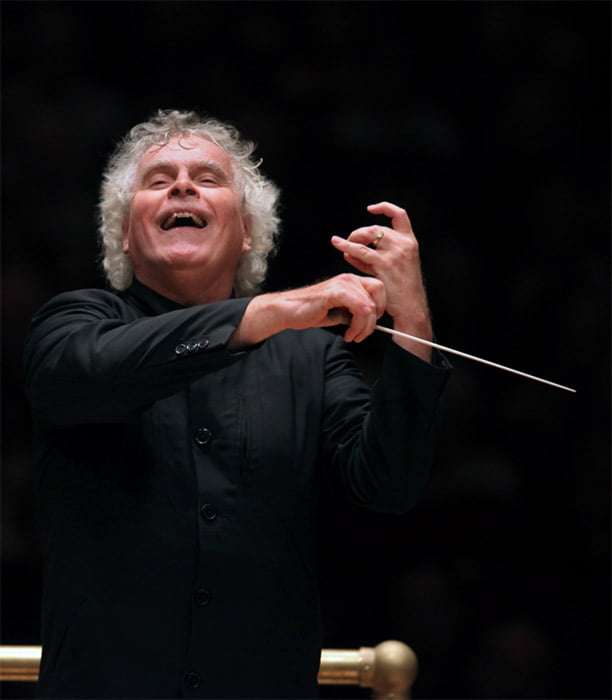 With Sir Simon Rattle’s tenure at the Berliner Philharmoniker coming to a close, he and it have embarked on a North American farewell tour, starting with this first of two concerts in Carnegie Hall.

Mahler’s Seventh Symphony was juxtaposed with Pierre Boulez’s Éclat. Common to both is color, more pronounced in Éclat (1965): both composers incorporate guitar and mandolin, while Boulez additionally makes use of alto flute, cimbalom and vibraphone among his fifteen-member ensemble. An important part is taken by the piano – handled expertly here by the late Karlheinz Stockhausen’s daughter Majella – and above all by the conductor, who needs to coordinate the interplay between precisely calculated written-out music and aleatoric sections. Eschewing a baton in the best Boulezian manner, Rattle led a tightly controlled performance, cueing furiously with both hands. This in itself became a major element of the work, almost detracting from the music. To immerse oneself fully into Boulez’s fascinating and sparkling sound world it was best to close one’s eyes. Boulez later added /Multiples to Éclat. 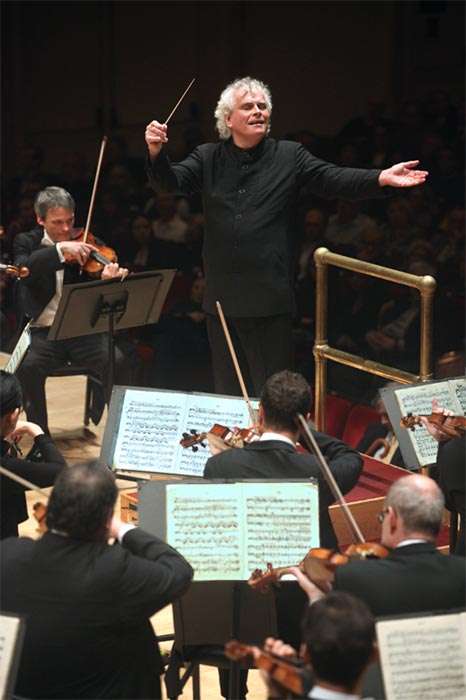 No intermission was taken after the ten-minute Éclat, and Rattle re-emerged for the Mahler with baton and without a score. The Philharmoniker played to a very high standard, with special kudos to first-horn Stefan Dohr. This Symphony is arguably Mahler’s most elusive, requiring not only an understanding of the character of each movement, but also, most importantly, a vision of how everything fits together to arrive at the triumphant ending. Despite the two Nachtmusiken and the marking of Schattenhaft (shadowy) for the central Scherzo, Mahler considered the work to be of “predominantly cheerful character”, a directive Rattle strove to realize, minimizing its darker aspects.

While he didn’t go as far as Boulez some years ago, who dissected the Symphony to show its inner workings, he nevertheless gave a straightforward reading that never tried to reveal hidden nocturnal demons. But neither were there any heart-stopping moments of beauty, for instance at the sehr gehalten (much held) in the first movement and analogous passages.

The first and third horns, together with oboe, set the tone for ‘Nachtmusik I’, capturing both the beauty of the music and its underlying irony. Mahler asks for the third movement to gain momentum gradually in order to realize its full impact as a grotesque reflection of a traditional Scherzo, something which could have been brought out more. ‘Nachtmusik II’, Andante amoroso, was taken at a tempo simply too fast to allow its serenade character to shine through.

Structurally the most-difficult movement is the Finale, which few conductors have been able to make work as a unit. Rattle did not quite manage a clear path through its various twists and turns, but merely went from one section to the next. Throughout the Symphony there had been instances of arriving at a climax without really building up to it, and in the Finale this proved most noticeable. And although towards the end some visceral excitement was created, it all fell flat again when the marking of Gehalten was ignored, so that the C-major statement was not allowed to resound as the work’s brilliant summing-up, its ultimate goal, the “bright day” Mahler intended.