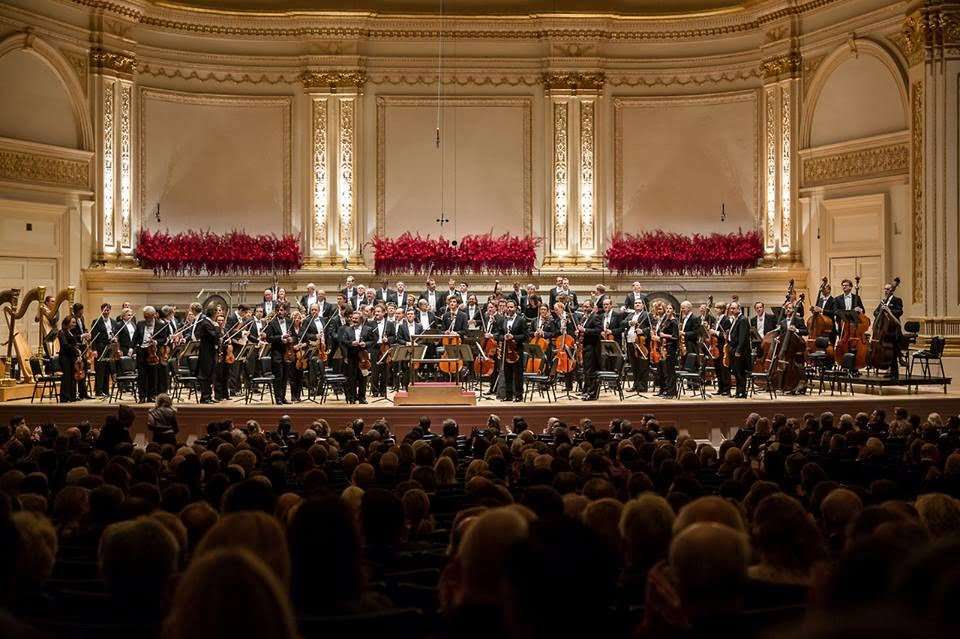 This opening night gala was the first of four Carnegie Hall concerts by Simon Rattle and the Berliner Philharmoniker, which lived up to its reputation as one of the world’s greatest orchestras in this concert of romantic music and included Max Bruch’s First Violin Concerto, brilliantly performed by Anne-Sophie Mutter.

Symphonic Dances, Rachmaninov’s final work, seems an odd title. Its spectacular colors, melodic development and pungent harmonies more closely resemble a symphony. Only the second movement, Tempo di valse, evokes images of couples swirling across a dance floor. Superb playing by the Philharmoniker musicians and the fine acoustics of Stern Auditorium made for a glorious sound, the softest and most subtle touches distinctly audible and the loudest passages powerfully resonant. Rattle vigorously attacked the opening movement’s slashing principal theme, which contrasted starkly with Manfred Preis’s lyrical alto-saxophone solos and Hendrik Heilmann’s piano riffs. When the main theme made its final appearance it took on an entirely different character as the woodwinds dissected it and gently tossed the pieces about.

The second movement begins with a discordant brass motif that returns several times. Daniel Stabrawa’s violin solo set the things in motion, the violins and cellos soon picking up the theme over a steady triple-meter beat as the woodwinds fluttered and chattered away. The finale brings percussion to the fore, the brass eventually taking over the most prominent role as it intoned the ‘Dies irae’ theme that Rachmaninov also quoted in several other pieces, including Rhapsody on a Theme of Paganini. 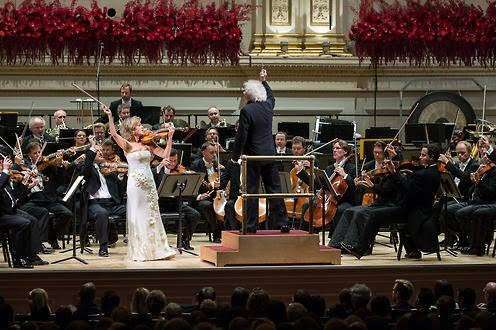 Anne-Sophie Mutter’s performance of the ubiquitous Bruch Violin Concerto marked the start of her six-concert Perspectives series at Carnegie Hall. Her playing emphasized the music’s romanticism and Rattle took the tutti passages with sweeping grandeur, and was also a perfect accompanist to Mutter’s dark-toned instrument. At the end of the first movement, Bruch has the soloist and orchestra seem to do battle – the violinist’s shifts into cadenza mode twice interrupted by the ensemble – with the apparent conflict resolved by the subtle segue into the gorgeous Adagio. There, both Mutter and the orchestra played with elegant restraint so as to make the music feel lighter than air, and in the spirited finale Mutter took advantage of opportunities for pyrotechnics.

In order to allow guests to dine after the concert in the roof garden atop Carnegie Hall’s just-opened Judith and Burton Resnick Education Wing, the concert started early and was performed without intermission. This timetable allowed for only three scenes from Stravinsky’s The Firebird, taken from the complete score of 1910. Rattle picked up with the with the shocking ff sforzando chord that introduces the ‘Infernal Dance’. Further brass and percussion outbursts rocked the Hall as the xylophone added macabre touches somewhat reminiscent of the last of Symphonic Dances. These percussive goings-on eventually gave way to the ‘Berceuse’, a lullaby intoned beautifully by bassoonist Daniele Damiano. The transition to the ‘Finale’, which began with the incredible growling of two contrabassoons, ended with a mysterious aura created by the pp strings, out of which Stefan Dohr’s horn solo emerged magnificently with the theme that was then repeated by the full orchestra again and again, building to one of the most thrilling of all climaxes.