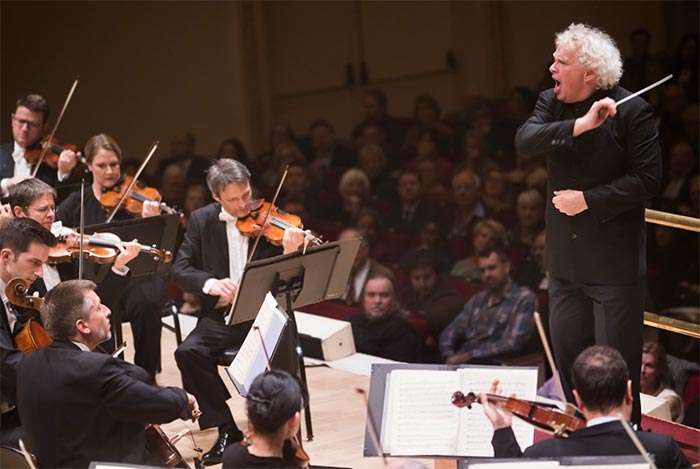 The Berliner Philharmoniker played brilliantly for Simon Rattle in this concert beginning with a fascinating concatenation of three landmark works from the Second Viennese School.

Rattle explained that the works by Schoenberg, Webern and Berg would be given without pausing between movements, and requested there be no intervening applause. The audience complied. The result was around fifty minutes of gripping music, its complex elements rendered with rhythmic and timbral precision.

Schoenberg’s Five Orchestral Pieces (1909) are rich in excitement and emotional content, as the vigor of ‘Vorgefühle’ (Premonitions) and the tenderness of ‘Vergangenes’ (The Past) demonstrated. The highlight was ‘Farben’, a dazzling array of colorations around a single persistent chord. In the final two Pieces explosive elements vie with plaintive outcries, building to a climax that peters out. 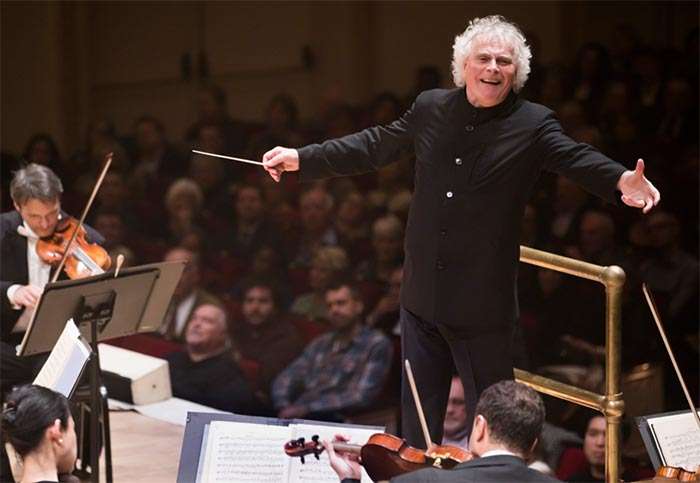 The first three of Webern’s Six Pieces (Opus 6, also 1909, revised 1928) are very short, the second generating more excitement with shrill outbursts and driving rhythms. Next is a funeral march marked by soft brass, rumbling drums and gently chiming bells, building to a terrifying percussion-laden climax giving way to dramatic silence, and in what remains contrasts of register and color abound.

Berg’s Three Pieces, also Opus 6 – completed in 1916 and dedicated to Schoenberg (and revised before publication in 1929) – make Webern’s music seem more aphoristic than it is. The Berliners responded with powerful and exciting playing, not least in ‘Reigen’ (Round Dance), which proclaims the demise of the Viennese waltz, and the concluding ‘Marsch’ was overwhelming right up to the final Mahler 6-invoking, hammer-blow.

After intermission, Brahms’s Second Symphony brought spiritual uplift to New Yorkers, still reeling from the Presidential Election result. In the opening movement (without exposition repeat), sunny aspects outweighed darker tinges; cellos and violas sang out gorgeously and Mathieu Dufour’s flute solos were outstanding. Rattle was very active on the podium. Low strings and brass, and Stefan Dohr’s horn solo, were lovely in the melancholy opening of the Adagio. Rattle then kept the violins almost at a whisper, as if the music were suspended on a thread of gossamer. Albrecht Mayer’s oboe launched the delightful Allegretto, nimbly offset by energetic strings, and in the Finale, begun without pause, Rattle’s attacks were explosive and rhythms emphatic. In the latter stages the brass – especially the trombones – came to the fore, sounding glorious in the coda.