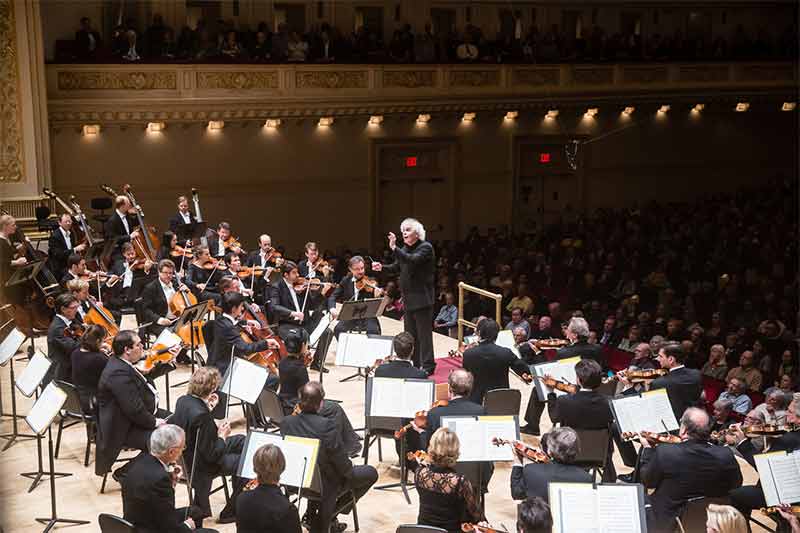 To launch its own label, Berliner Philharmoniker Recordings, the orchestra has released a deluxe set of the four Schumann symphonies with Simon Rattle, consisting of CDs with Blu-Ray audio (review-link below) and even a limited edition on vinyl discs. They brought these works to Carnegie Hall for two concerts, of which this was the first.

The string section had been reduced to 12-10-8-6-5. However, while one consequently expected a lean, transparent, possibly historically informed, performance, Rattle took an overly Romanticized approach including flabby rhythms, extreme sostenuto and legato throughout in the best Karajan manner, and thick textures. The small string sections tried their best to meet such demands, but if this is to be the style, why not use the whole orchestra and let us enjoy the renowned Berliner Philharmoniker in all its glory – the whole nine yards? What sets it apart from many other orchestras is its rich, luxurious sound, so it is pointless to use a semi-chamber orchestra and strain for the same result.

The lack of string sonority was most disturbing in the slow movements. Only six cellos in a space as large as Carnegie Hall trying to sing out the melody in the Larghetto of the First Symphony, or the violins trying to soar in the Adagio of the Second simply did not work. On the other hand, while one expected a light touch in the scherzos from a smaller section, nary a staccato was to be heard – much less a spiccato employed – but rather notes were lengthened to approach a legato. Nor were balances helped by a small string section; although placed on risers, the woodwinds projected poorly, while the brass were overpowering at times. The trumpets in particular were sitting in such an acoustically advantageous spot that one could practically hear them breathe. There were unexpected ensemble problems throughout, starting with a botched string flourish in the introduction of the ‘Spring’ Symphony.

With a virtuoso orchestra such as this, these lapses can only be ascribed to unclear conducting, and interpretively the word which kept coming to mind was “mannered”. Again and again, after going along quite pleasantly for a stretch, the flow would be interrupted by exaggerated inflections or extremes of dynamics, most egregiously in the Second Symphony. The fugato in the slow movement was taken completely out of context, played much softer than the marked pianissimo, slower, and in a completely different character than the surrounding sections. And while Schumann marks fermatas over a chord and the subsequent rest in the finale, Rattle imbued them with an air of finality, rather than treating them as the pregnant pauses they should be.

This concert (and the subsequent one) doubtless were meant to promote the Schumann set. One can only wonder whether they accomplished this objective.