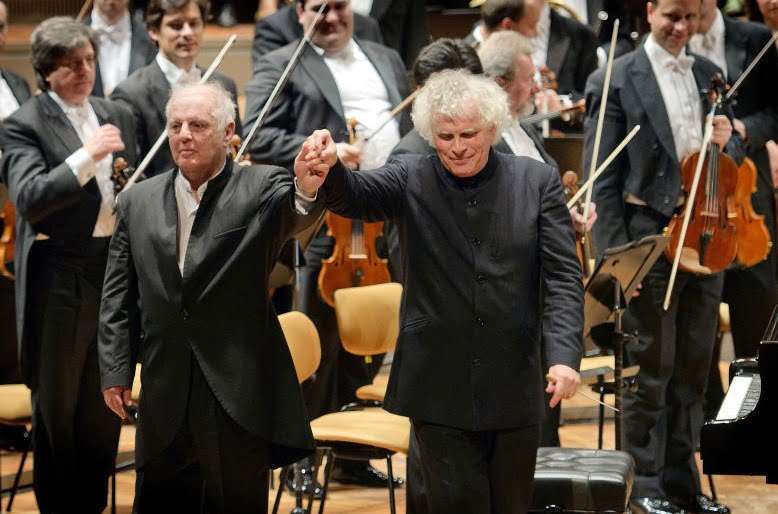 It was 1964, Daniel Barenboim made his debut with the Berliner Philharmoniker playing Bartók’s First Piano Concerto, Pierre Boulez conducting, and a lifelong friendship ensued between the Argentinean and the Frenchman. Fifty-plus years later Barenboim was back in Berlin with the Bartók, numerous appearances there as pianist and conductor in between of course, this time with Simon Rattle, but not before the Opus 72 set of Dvořák’s Slavonic Dances had been dispensed. Not without its fiery numbers, Opus 72 tends to greater wistfulness than its Opus 46 counterpart, and was here conducted (from memory) and played with relish, foot-tapping exuberance and heartfelt lyricism, not forgetting dynamic variety, vivid detailing, enticing lilt, virtuoso panache (woodwinds exceptional) and a soulful characterisation that avoided mannerism. The final No.8, an end-of-an-era sad waltz, was especially affecting

Following the interval, piano now wheeled on, Barenboim tackled Bartók. It was a measured account, rather colourless and somewhat laboured on Barenboim’s part, if focussed within his particular compass, although the relayed sound was a little diffuse (it had been excellent in Dvořák) with woodwinds distant, but the relative tentativeness undersold the first movement’s momentum, even allowing the need for an accelerando at the midpoint, here achieved in terms of speeding up per se but rather lacklustre for all that. Better was the mysterious processional (initially piano and percussion, the latter precisely imagined in timbre by the composer) that is the second movement, sinewy woodwind lines adding to the hypnotic effect, subito fortissimos offering drama. Percussion (and trombones) kick-start the Finale, Barenboim finding greater range and drive than hitherto yet with nothing throwaway: Bartók’s music is too precise for that. What had been dull was now dancing, if not deliriously. Extended applause failed to gain an encore.

The piano remained, now with lid down, and several extra trumpets added (making fourteen) for Janáček’s Sinfonietta. With sonic splendour restored and given Rattle’s long association with it, this masterpiece burst over the footlights. Concise Sinfonietta might be but there is something inimitable in every bar – be it expression, harmony or scoring – and with the Berliners playing heroically (not least the timpanist) this was a magnetic and magnificent way to close the concert.