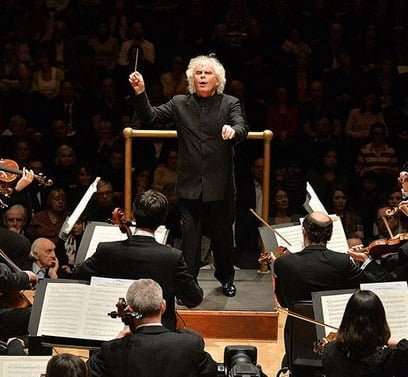 Simon Rattle’s Sibelius Symphony Cycle with the Berliner Philharmoniker at the Barbican Centre continued here with what might loosely be termed the ‘middle period’ works, along with his only Concerto as marks the climax of the first (late-Romantic as much as Nationalist) phase of his maturity.

Interesting to speculate whether the Berliners had ever played the Third Symphony (1907) prior to embarking on this Sibelius odyssey. Pointedly overlooked by Herbert von Karajan (though whether this and a re-make of the Seventh would have come about at the turn of the 1980s had EMI not terminated its Berlin projects is uncertain), and a piece which mystified so doughty a Sibelian as Eugene Ormandy, it seems never to have presented any intractable problems to Rattle – who sustains a virtue out of its supposed transitional nature.

That said, there was a little tentativeness as the opening Allegro went on its alternately incisive and searching course – the twin themes deftly rendered but with tension marginally faltering as the development reached its culmination, and with a (deliberately?) provisional feel to the decidedly un-epic coda. The first of Sibelius’s symphonic intermezzos, the central Andantino was admirably judged as to its ‘allegretto’ qualification: the main theme evolved with an increasingly heady lilt, with the hushed inwardness of the first interlude as tangible as the capricious charm of its successor. Nor was the finale’s mutation from scherzo to finale audibly hampered – the (antiphonal) violins relishing their initially waspish exchanges and the peroration, purposeful rather than magisterial, having no risk of expressive overkill. 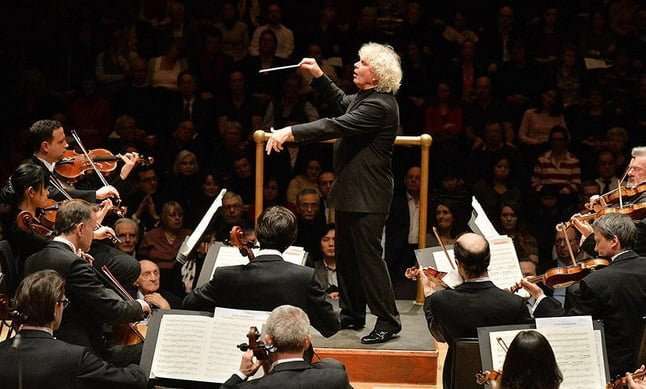 At what point Sibelius’s first creative phase ends and the second begins has long been a matter of debate, but the Violin Concerto (1903/5) is as good a watershed as any and its inclusion in here amply justified. Its technical demands may long ago have ceased to worry violinists of the front rank, but the difficulty of harnessing such virtuosity to an inherently symphonic ground-plan remains; in which respect, it has had few more convincing advocates than Leonidas Kavakos. Thus the lengthy opening Allegro lacked nothing in symphonic cohesion, Kavakos underlining the developmental ingenuity of its central cadenza, though there was no lack of fervency – not least in a coruscating account of the coda. His warmly tensile tone was heard to advantage in the Adagio, its emotional peaks methodically but eloquently rendered and with Rattle’s accompanying at its keenest. Neither did the finale disappoint, its underlying ‘polacca’ rhythm trenchantly defined and the climactic surge at the movement’s centre as thrilling as the final bars’ dextrous progress towards its well-nigh theatrical pay-off.

Both in terms of formal conception and expressive immediacy, this was a performance with which to reckon. And, in the absence of any unaccompanied Sibelius, what better than some J. S. Bach for the pert and insouciant encore, the ‘Gavotte en rondeau’ from his E major Partita, BWV1006.

If the audience had been enthusiastic for the two works in the first half, there was more than an air of bemusement as the Fourth Symphony (1911) pursued its singular course – though that this most unequivocal of the cycle has come into its own during the past quarter-century should not mislead anyone as to its demands on both players and listeners. Always a highlight from Rattle’s earlier cycles, it continues to be so – not least in an opening movement whose refractory progress from its glowering initial gesture and the fateful cello melody that follows in its wake, through a gauntly intensifying development and a drastically curtailed reprise, to the sparsest of codas was acutely in evidence. Nor did Rattle underplay the Scherzo’s elusive juxtaposing of irony and whimsy, prior to the menacing aura that overwhelms its later stages.

Unlike some of his peers, Rattle did not extend the slow movement’s anguished strivings, allowing those initially disparate motifs to cohere at an unforced pace towards the twin climaxes – the former as baleful as the latter was imbued with a stoic grandeur such as Sibelius never equalled. If the earlier movements demonstrated the depth of the Berlin strings, moreover, it was the woodwinds that came into their own here. Rattle made an almost perfect transition into the finale, pointing up that acute tonal sidestep which launches this movement on a questing course whose ease of motion affords no let-up in tension; not least with a climax that shatters the accrued momentum before finding closure in a succession of string chords as shut down the emotional space with sobering inevitability.

Hardly a comfortable way to conclude a concert, but this is not a Symphony that should be heard in any other context: something this audience, warily appreciative, seemed to grasp. From here, Sibelius’s symphonic trajectory is more affirmative – if no less uncompromising.