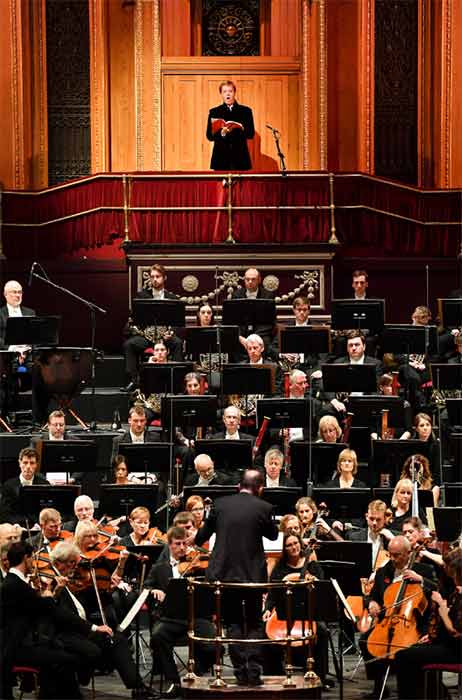 After all the military and patriotic commemorations of this year’s Remembrance weekend, not least the televised one the night before in the same venue, there came this sober, spellbinding performance of Berlioz’s monumental Requiem, first heard in 1837 at Les Invalides in Paris at a state funeral, and, 180 years later, inevitably recalling the terrorist attacks in Paris last year.

Berlioz may have been a card-carrying atheist, but like many an artist who didn’t ‘do God’, he had a pragmatic if unorthodox relationship with Christianity, not least with the apocalyptic imagery of the Requiem Mass text, adapting it like a libretto to impose his view on this liturgical drama, and he had natural affinity for the post-French Revolution style of grand public celebration.

Many music-lovers are drawn into the Grande Messe des morts by the apparent megalomania of its forces – here a chorus of 350, four ten-strong brass sections (two at the back of the orchestra, one each either side high-up in the second-tier boxes), ten sets of timpani – but these are used sparingly and, while in the right hands awesome, they don’t define the character of the work.

The overall impression was of exposed choral and orchestral lines, with the Albert Hall acoustic encouraging them to linger and hover. François-Xavier Roth introduced this clarity from the start as the falling phrase “Requiem aeternam” quietly filtered through the texture in a way that might have impressed John Adams, followed by the lower strings intoning their chant-like ‘Dies irae’, almost oblivious to the remoteness of the chorus. 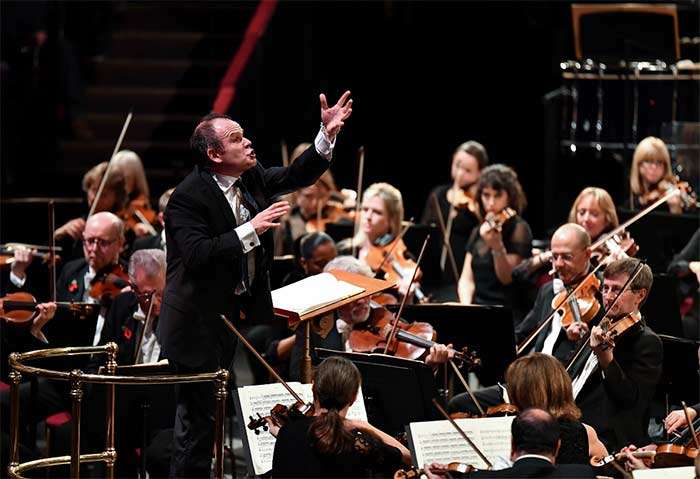 In a work where there is little genuinely fast music, Roth’s sense of pace and rhythm was unpressured, and kept the passages of high choral writing from sprawling. The brass bands filled the crack of doom spectacularly, but other detail was just as telling – the ‘period’ sheen of the string sound, the bassoon consort in the ‘Offertorium’, the distant wail of the cor anglais threading through the ‘Quid sum miser’ and the uncannily precise aural void Berlioz conjures with highest woodwind and lowest brass in the ‘Hostias’.

The three choirs distinguished themselves in some dangerously unsupported writing, effortlessly creating huge vistas of sound and collective terror and fragility. The confident a cappella contributions drew attention to the ‘authentic’ French pronunciation of the Latin, where every “u”-sound came from pursed lips. Shaped by Roth’s unobtrusive, finely judged theatrical flair, the combined chorus illuminated text and music in a way that you think would have been entirely familiar to listeners nearly 200 years ago.

Toby Spence (in place of Maximilian Schmitt) was the tenor in the ‘Sanctus’, half-archangel, half-supplicant, with his passionate high-lying music accentuating what mere humanity is up against, and for once the fugal “Hosanna”s sounded trim, even if they sit awkwardly with the tenor. Roth steered the ‘Agnus Dei’ and the non-liturgical return of the opening into a semblance of heavenly bliss as Berlioz’s extraordinary vision receded into the distance and real silence.