In this recital, part of Lincoln Center’s White Light Festival, Argentinean Bernarda Fink and Anthony Spiri gave splendid performances of songs by Schumann, Dvořák and Mahler under the title “Earthly and Heavenly Life”, a reference to two of Mahler’s Lieder. Fink’s pleasant, youthful voice is well-suited to the gentle lyricism of these songs, each rendered simply and directly. She aptly conveyed a range of emotions from personal faith in Dvořák’s Biblical Songs to tender love and longing in the Schumann and Mahler.

Fink glided effortlessly, if with elegance and charm, through the Schumann, imparting to each song a special character. She expressed with deep feeling the tender expressions of love mixed with the sorrow of loss, conveyed in Lenau’s poetry. The last setting, ‘The Sultry Evening’, expresses thoughts of death that accompany the lovers’ parting, to which ‘Requiem’ seemed sadly appropriate, its religiosity related to Dvořák’s Biblical Songs. 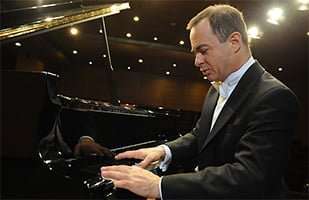 Three Mahler songs closed the first part of the concert. The soft, wafting piano figures that begin Frühlingsmorgen (Spring Morning) were paced rather briskly, conveying youthful energy and captured the folk-like idiom perfectly. In ‘Das irdische Leben‘ (The Earthly Life), Fink seemed removed from its human tragedy – the utter hopelessness of fulfilling human needs. With each verse the child’s cry for bread becomes more assertive, yet the mother consistently responds that he wait until the morrow. The child’s inevitable death is presented not as horrific, but as another of life’s relentless tragedies, with Fink perhaps even more detached. The contrasting ‘Das himmlische Leben‘ (The Heavenly Life) – also used as the finale of Mahler’s Fourth Symphony – ended the first half of the program on a lighter note, describing a child’s vision of paradise, where saints perform routine household chores. Spiri played the grace-notes that embroider the opening theme emphatically, enhancing the theme’s rustic gaiety, while adding lilt to Fink’s sweetly naïve descriptions of heavenly life.

Dvořák’s Biblical Songs, composed in later life, has become a signature-piece for Fink. She performed five of these settings of Psalm texts from the Czech-language Kralice Bible, fervently conveying strong, personal religious conviction. The last of these, ‘Sing ye a joyful song unto the Lord’, was the most engaging, Fink convincingly expressing sheer happiness in praising the marvelous works of the Lord.

Fink concluded with Mahler’s Rückert-Lieder, five deeply personal songs to poems by Friedrich Rückert that present a wide range of human emotions without self-indulgent effusiveness, and that is how Fink sang them. ‘Ich atmet’ einen linden Duft‘ (I Breathed a Gentle Fragrance) was gently wafting, ‘Blicke mir nicht in die Lieder‘ (Don’t Look into My Songs) was rendered with tongue-in-cheek scolding, and ‘Liebst du um Schönheit‘ (If You Love for Beauty) as a humble expression of love. In ‘Um Mitternacht‘ (At Midnight), however, Fink seemed too detached, speeding through its declamatory last verse with insufficient conviction to convey its courageous and undaunted belief that the Lord will provide. Even in ‘Ich bin der Welt abhanden gekommen‘ (I am Lost to the World), arguably Mahler’s greatest song, Fink seemed remote from its profound expression of being “lost in the world” and finding comfort in love. Spiri added his own expressivity, with only occasional affectations that seemed contrary to Fink’s direct and unadorned approach. His playing throughout was flawless and respectful.