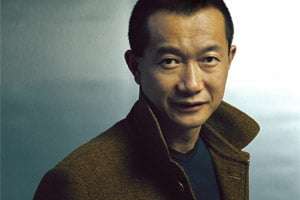 Opening the Barbican Centre’s latest series, “Beyond the Wall – New Music from China”, Tan Dun returned to the BBC Symphony Orchestra for the UK première of The Map – an elaborate east-west fusion complete with video of Chinese musicians and a solo cello role. As perhaps the most famous of Chinese composers in the west, Tan Dun also is a central figure throughout the whole festival, which continues to 16 May. He returns, this time with the London Symphony Orchestra, to conduct Lang Lang in the UK première of his Piano Concerto and the U-Tube Symphony, Eroica (21 April) and is the focus of the Kronos Quartet concert (10 May), playing his Ghost Opera.

This opening event started pre-concert with a foyer performance of some of the Chinese musicians who would later appear in the video for The Map, in which – engagingly – Tan Dun introduced some of the original dances that inspired his interest, from the village where he met in the winter of 1981 a man who could make stones sing not only to the wind, clouds and leaves, but also to the past and future. When, in 1999, Tan Dun returned to the Tujia village in Hunan province, with cellist Anssi Karttunen and the Barbican Centre’s Graham Sheffield among others, unfortunately the stone man had died, and Tan Dun’s musical rescue mission began in earnest.

In the first half of the main concert, Tan Dun conducted two concertante works by compatriots Tang Jianping and Guo Wenjing. Tang’s was his Olympic-inspired Sacred Fire, complete with Greek-myth basis (of Prometheus, who stole fire from Olympus for the benefit of mankind, and suffered endless torture for so doing), receiving its European première with Wang Bei Bei on marimba. The least recognisably Chinese, it was exhilarating and pleasant to listen to and watch, with Wang’s spirited and speedy traversal across her marimba, although she only really came into her own in the extended solo section before the climax.

Tang Jun Qiao, in her long white dress embroidered with the image of a tree, played not one dizi (bamboo flute) but three, each with the distinctive catch of overtones that creates a buzzing accompaniment to her instruments’ main notes. In Guo Wenjing’s Chou Kong Shan – a concerto for bamboo flute and orchestra, here receiving its UK première – Guo opens with panpipe (or Chinese equivalent) chords from the orchestral flute players as a background to the long held note for the dizi. Here the intervals and themes are distinctly more oriental, although the second movement plays to pizzicato strings and strident brass, fashioned like a typical orchestral scherzo.

Inspired by mountains (as are many of Guo’s works, as he is from the mountainous city of Chongqing) and poetry, the very quality of the solo instrument(s) made for a more effective east-west mix.

However both Tang and Guo were overshadowed by Tan Dun’s distinct and unique soundworld. His nine-movement concerto The Map – commissioned by the Boston Symphony Orchestra for Yo-Yo Ma and premièred by him in 2003 – actually uses more restrained forces than his compatriots, but requires three screens – here above the orchestra (like Chinese scrolls unfurled together) and two within the violins and cellos. On to these were beamed images of Chinese players, whose music Tan Dun skilfully weaves into his live-music. Anssi Karttunen has played the work 28 times, and was there at its inception, so one couldn’t have wanted a more secure partner for this UK première.

The movements form four parts – the first three highlighting Ghost Dance and Cry-Singing (Nou), Blowing Leaf and Cymbal Colouring (Daliuzi); the next two highlighting Pipes (Miao Suona) and antiphonal singing (Feige) – where the nasal twang of Long Xian-E’s voice on the film waited for Anssi Karttunen’s cello’s echo as if she was singing to her lover across the mountains; movements 6 (an interlude, entitled Mapping the Portrait) and 7, the extraordinary stone quartet – three players on video and one percussionist live (here David Hockings) – form the penultimate part; while movements 8 and 9 bring the musical and video strands together for Tan Dun’s effect to “become ‘one’ and recreate music in its original, monophonic state: simple, like heartbeats. It is a finale that does not end.”

All this was so much more ambitious than the works in the first half, so there was a danger that Tan Dun’s composition might unbalance the concert. However, with the excellent Chinese soloists in the first half matching their filmed compatriots in the second, there was a palpable build up throughout the evening. As an encore, Tan Dun introduced the silver-head-dressed Long Xian-E who sang two traditional songs – “I Miss You” and a “Labour Song” – squaring the circle – east visiting west and taking us east again – for a wonderful start to the Barbican’s enterprising contemporary Chinese music festival.