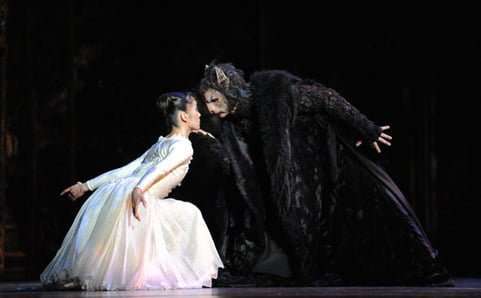 One would think that the tale of Beauty and the Beast would be a natural for ballet, but, apart from a fleeting appearance in some productions of The Sleeping Beauty (as wedding guests) and John Cranko’s short-lived 1949 version, it has not found favour. David Bintley, long-time Director of Birmingham Royal Ballet, and this country’s most established and successful classical choreographer, thought otherwise in 2003 in a ballet which did not quite work and led to a revised version in 2008.

It is not his greatest work, but that in terms of Bintley is not necessarily the end of it, so gifted as he is for lyrical movement fully within (and indeed part of) the English neo-classical tradition. For Beauty and the Beast, he is hampered by the storyline which simply requires too much narrative to allow the work to get going from the off – only when first Belle’s father and then she enter the Beast’s enchanted castle do you really feel that you are seeing what you came for. In fact, this is a ballet which simply gets better and better. From a slow beginning, full of mimed scenes, too little dance and over-obvious characterisation (Belle’s two unpleasant sisters are insufficiently differentiated), things quicken with a lively divertissement for massed birds who take Belle deep into the forest to the beast’s castle (Tzu-Chao Chou as Raven untiringly virtuosic). The Second Act ball is an impressive set-piece of dancing, and the Beast’s despair at Belle’s desire to see her father and departure to do so become genuinely affecting. Her return and the final lifting of the curse upon him leads to the final exultant pas de deux which, in typical Bintley fashion, eschews fireworks in favour of deeply-felt lyricism. 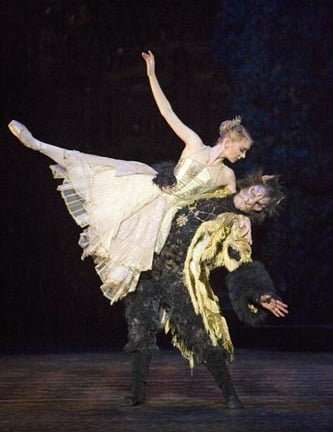 The ballet looks sumptuous thanks to Philip Prowse’s ornate costuming and masterful sets, which open and close as a children’s book to reveal ornate interiors or gloomy forests – in this, Mark Jonathan’s expert lighting plays a crucial role, allowing for the feeling of darkness and foreboding without obscuring the movement. Glenn Buhr’s brass, percussion and woodwind-heavy score is a highly effective composition, telling the tale with fluency and not a little musical interest, especially so when played as well as it was by the Royal Ballet Sinfonia under the sure hand of Philip Ellis, one of British ballet music’s unsung heroes.

The company looks spry, with clear relish in its step. Marion Tait, former dramatic ballerina par excellence and now the company’s Assistant Director, reprises her extraordinary vignette as the decrepit but lively Grandmère at Belle’s sisters’ wedding, and Jonathan Payn makes much of the Monsieur Cochon, their suitor, dancing with porcine wit. Yaoqian Shang, a recent recruit from Beijing (via The Royal Ballet School), impressed greatly as Wild Girl with an easy, open dance style and care with her arms and hands. But the central couple have to carry the work, and in that, the opening night’s pairing was only partially successful. Elisha Willis’s execution of the choreography had technical and stylistic confidence, but her characterisation was strangely absent; it is always difficult to portray a ‘goody’ and a sweet, innocent, compassionate goody at that, but Willis opted for ballet’s stock ‘smile of sweetness’ and ‘frown of distress’ a little too readily: more nuance and variety was needed.

No complaints about Tyrone Singleton, who is testament to Bintley’s sure eye and faith in the passage of time – he was a somewhat coltish recruit in 2003, and it would have been difficult for most then to see him now, not only as a company Principal but also an artist of considerable power. For most of the ballet, he is clad in a shape-altering costume and a face mask which demands great focus on expression coming through the movements and his body. Singleton wholly succeeded in this, convincing as a wild creature whose compassion is buried deep within, his movements shifting from the predatorily pantherine to the tenderly human. He partnered with both care and strength, making the final pas de deux between himself, restored to human shape, and Belle a sweeping arc of movement, with fine legato and sure placement.