Artists of Birmingham Royal Ballet, Students of Elmhurst School of Dance and The Royal Ballet School 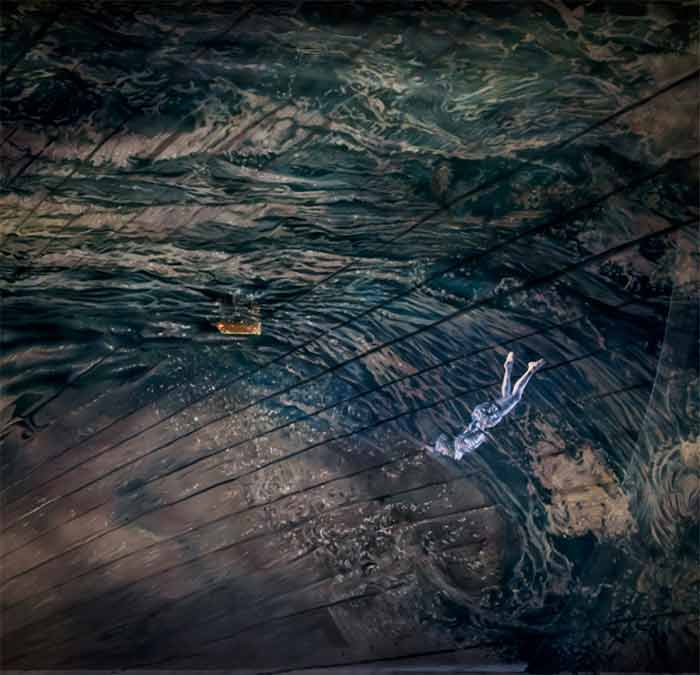 Is Shakespeare’s The Tempest a suitable narrative for dance? Birmingham Royal Ballet’s Director and de facto Principal Choreographer David Bintley evidently thinks so. And yet there are, relatively speaking, few versions for the dance stage. Some plays, most notably Romeo and Juliet, lend themselves better – the language of love, anger and comedy is that of this art form, after all, but when it comes to The Tempest with the complications of Prospero’s mind, the varied emotions and motivations of a large cast, its suitability is less clear. It is clear that, when approaching most Shakespeare, choreographers must wield the pruning shears with confidence, be it like Frederick Ashton, whose The Dream works so well because he excised a whole plot line and its characters, or José Limón, whose retelling of Othello, The Moor’s Pavane, is a distillation, stylisation even, of the original.

David Bintley’s new ballet falls between two stools and, indeed, into its two halves. Where he is most bold, in the Second Act, he streamlines the plot and achieves a sweep of action which carries the ballet to its bitter-sweet conclusion; where, in the First Act, he spends too long in the exposition of all the different characters, the work stop and starts in a series of vignettes which never gathers the requisite narrative momentum. Do we really need to see the scene with the attempted assassination of the King of Naples by the Duke of Milan and Alonso if they all never attain more than peripheral status in the storyline? It becomes an extended mime scene with little to no dancing and weighs down the narrative. Where Bintley expands and re-imagines in the First Act, it takes flight – the underwater sequence of Ferdinand among the creatures of the sea, making his first entrance flown in from aloft, is striking, a sort of divertissement sous-marin, which looks ravishing and entertains with its inventiveness. 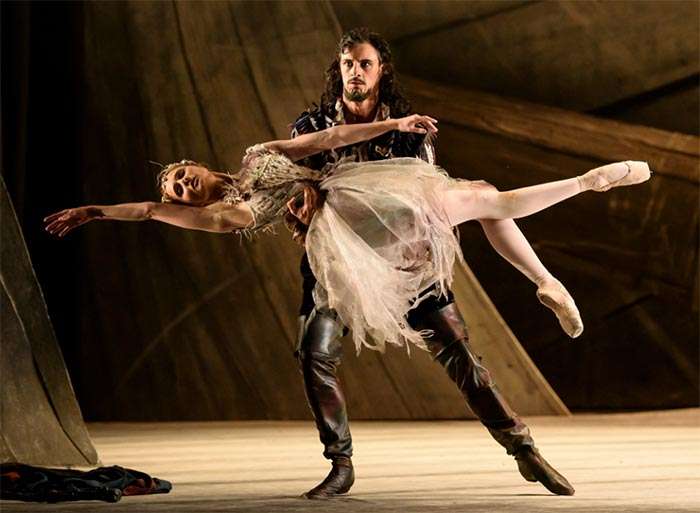 In the Second Act, he takes greater liberties with Shakespeare, and his new ballet is all the better for it. The masque is now extended into a full-blown dance-athon, giving the whole company a chance finally to dance in a story which focusses on individuals, and the rounding up of all the characters by Prospero in the second tempest achieves an exciting, almost breathless quality as his magic draws them all to him. Bintley choreographs in his usual fluent, neo-classical and, rare thing indeed, English style, with a focus on lyricism and expressiveness. He occupies a difficult position in British ballet – clearly in the line of choreographers from de Valois through Ashton to MacMillan, there are times that he does not always have the most individual of voices. It does not help that much of what he does in Tempest has already been ‘done’ before: Ashton depicted a storm at sea and an underwater scene in his Ondine; he also showed the relationship between master and spirit servant with Oberon and Puck in The Dream; he even put dancing goats and classical goddesses on the stage in Sylvia. Bintley negotiates all of this, however, and is both talented and experienced enough as a choreographer not to create something of his own.

Sally Beamish’s music does not always help. It is, let it be clear, a superb score, full of cleverness and evocative of the sea, of the storm, of an isle full of sounds and sweet airs, but it lacks heft in too many places. While there are swells of sound which carry the dancing and the audience along they are few and far between – often the scoring reduces to just a few instruments. There is a great deal of percussion and brass, less of strings, making the soundscape a little jumpy, hesitant even. The work looks wonderful in Rae Smith’s sweeping keel of a boat single set which changes in texture and look in Bruno Poet’s superb lighting design. Smith has also designed the costumes which are sumptuously made and often redolent of the Jacobean period, a riot of velvets and brocade; the masque is an explosion of technicolour and exaggerated dress, as befits the product of Prospero’s memory and imagination – rich garments, stuffs and necessaries indeed. 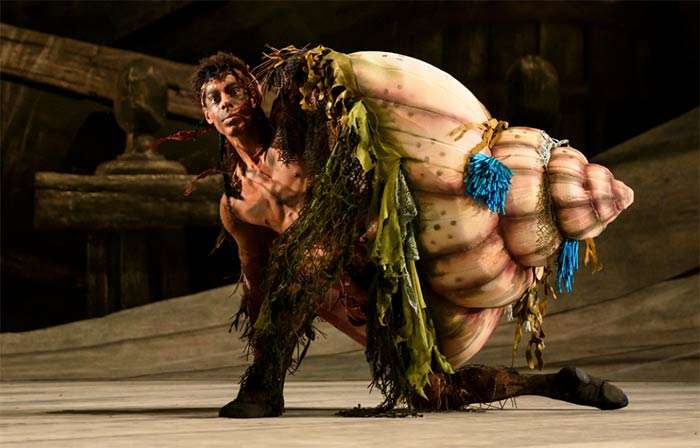 Birmingham’s dancers cannot be faulted – they enter into the spirit of this new work with gusto. At its centre, Iain Mackay who succeeds in bringing real gravitas to the role even if, owing to the direction, he falls out and into focus a little too often. His gestures are large, commanding, even if the relationship with his daughter, Miranda, is still a little sketchy, although, again, this is more to do with what he is given to do rather than how he himself does it. Jenna Roberts is a perky Miranda whose character does not progress beyond two dimensions; I found her portrayal a little obvious and lacking in nuance. Joseph Caley, however, despite being given precious-little actual dancing as Ferdinand, was quite the opposite, projecting with confidence, communicating all his emotions clearly and without artifice.

Bintley has made several clear choices about Ariel, Prospero’s spirit: he has, perhaps surprisingly, chosen Mathias Dingman, a strong, powerful Principal, almost as far from the idea of an ethereal creature as possible. Ariel flies a lot in the opening scenes, but Dingman brings an earthiness to the character while dancing superbly – his tricks and turns are carried out with real aplomb, although Bintley’s choice not to have Prospero release his spirit at the end, despite having forgiven all others, is strange – to have a grieving Ariel left on the beach as Prospero boards the ship to carry him away seems is hard to understand. Tyrone Singleton brings much to the role of Caliban, his rage, the well-judged comic scenes with Trinculo and Stephano and his latent desire for Miranda. And yet, in this role too, there seems something lacking – we certainly do not feel much sympathy for him, and a few moments to show what a good dancer he his apart, Singleton is too often reduced to a lolloping gait and cowering in fear of Prospero. 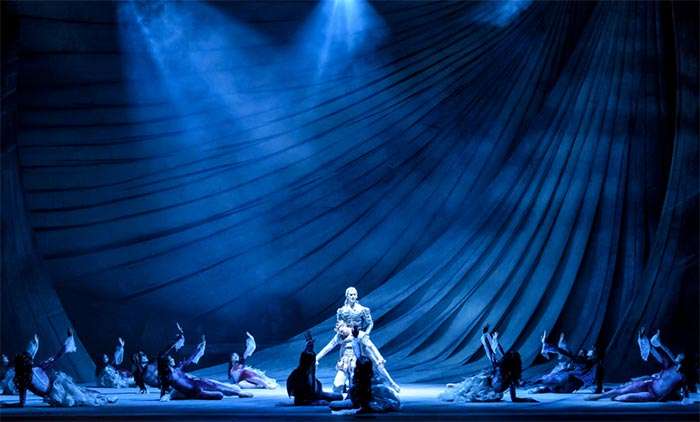 Mention to the comic characters of the jester and drunken butler, played fully in the British ballet tradition by the talented James Barton and Valentin Olovyannikov and, especially, Lachlan Monaghan whose Neptune stole the show in a display of virtuoso dancing in the masque sequence. This young Australian dancer joined the company four years ago and he has finally received a role in which he can make a considerable mark – a talent to watch.

The Tempest is, one suspects, a ballet which will be adjusted and refocussed in places – it is a co-production with Houston Ballet and will look a little different upon its return and revival in the U.K. Certainly, there is much to enjoy, much to be delighted by, and certainly much to ravish the eye.