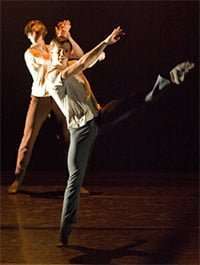 This first triple bill programme seems a cut-price affair: three abstract pieces with no sets, and each requiring a small number of dancers. ‘Small’ does not in itself mean ‘bad’, and some of the greatest ballets use few dancers (Ashton’s Symphonic Variations), but if the works presented are not of the highest quality, one’s mind begins to dwell on what one isn’t seeing rather than what one is. It is a pity, given how likeable a company Birmingham Royal Ballet is and how wonderful a canon of works it possess that in this mixed bill it was not presented in its best light. 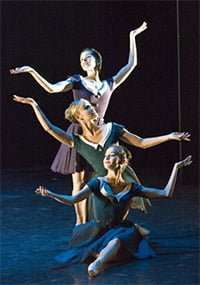 David Bintely’s Take Five (2007) is a jolly, jaunty number, set to a series of pieces by The Dave Brubeck Quartet. Bintley has ’done’ jazz for other works (Nutcracker Sweeties and The Shakespeare Suite) and seems drawn to the rhythms, but, in Take Five, without strong indications of character, as he gave in the above-mentioned works, the classical ballet idiom seems a little tame. Jean-Marc Puissant’s costumes are sweet (very Doris Day for the women) and Peter Mumford’s lighting is effective, but it all seems a little polite, a little like a Home Counties production of West Side Story. These are awfully nice young people, shimmying and jazz-handing just how they have been taught to do. It is innocuous stuff, whose best moments are when the jazziness is dropped somewhat and Classical Dance pokes through: in Flying Solo, Joseph Caley does precisely that – he is tremendously likeable as a dancer, an honest artist who invests his heart and soul into the task at hand. Young William Bracewell’s line and engagement impressed – his debut as Ashton’s Oberon in The Dream is eagerly anticipated. In the end, the piece meanders its way (much like most jazz music) and then stops. Praise to the musical ensemble for idiomatic playing of the Brubeck lollipops selection. 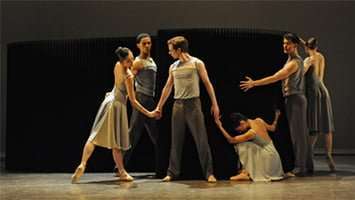 Jessica Lang’s new-minted Lyrical Pieces is set to a judicious selection of Grieg’s piano works, superbly played by Jonathan Higgins. Lang shows the influence of her mentor Twyla Tharp in her placement of the dancers, and the selection of piano pieces danced to by an ensemble evoking some form of community through varied moods and scenarios (jokey, romantic, the ‘outsider’) can but remind the viewer of Jerome Robbins’s sublime Dances at a Gathering. It is, again, pretty harmless stuff, and, indeed, as its title indicates, focusses on the lyricism of dance. It was performed with commitment – Iain Mackay investing much in his choreography, especially in his melting duet with the impressive Jenna Roberts to ‘Phantom’. Matthias Dingman is a dancer who catches the eye, so it was good to have him lead the ensemble in a melancholic section set to ‘In Ballad Style’. Problems arise with Lang’s use of molo design’s black concertinas of black kraft paper, which are lugged around by the poor dancers to create a compendium of shapes – at one moment, two enormous blocks unfold to stretch across the entire stage, at another small squeeze-boxes are comically opened up and wiggled around. It is all sixth form stuff and not worthy of a serious dance piece; an irritating distraction from some pleasing if pallid choreography.

At least Lyric Pieces is not Grosse Fuge. This piece of Eurotosh is loathsome. There is no merit in the posturing choreography delivered in the requisite po-faced, mildly anguished manner; Van Manen’s ideas are scribbled toddler-like across the sacred canvas of Beethoven’s compositions. The costumes, designed by said choreographer, are simply hideous – the women in unflattering basques and what look like plastic cake decorations in their hair, the men, bare-chested, swathed in preposterous black, floor-length skirts which they later shuck to reveal little black trunks and a remaining belt on which, I joke not, the women at times swing, are lifted and are dragged around. The much-vaunted eroticism is about as authentic, and indeed as subtle, as those sad ladies of the night rapping on plate-glass windows in the back streets of Amsterdam. It is portentous, pretentious and preposterous. I record that the intrepid octet of dancers did what was required of them.