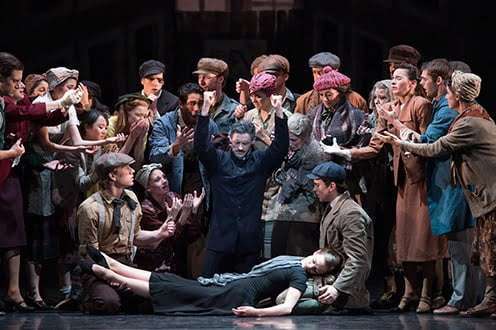 Birmingham Royal Ballet’s Mixed Bill ‘Shadows of War’ brings together three works linked to conflict; they could also be linked by their Scottishness, given that David Bintley’s Flowers of the Forest is a be-kilted and bonneted evocation of both picture-postcard and warrior Scotland (the massacre at Flodden Field, to be precise), Robert Helpmann’s Miracle in the Gorbals is set in 1940s Glasgow (i.e. contemporary at creation) and La Fin du Jour, an elegy for the generation swept away in the Second World War is by the Scotsman Kenneth MacMillan. Whatever its raison d’être, it made for a stimulating and satisfying mix.

As the centrepiece, BRB showed its recreation of Robert Helpmann’s wartime ballet Miracle in the Gorbals. This is one of those works, long-gone from the repertoire, which enjoys near-mythical status, partly because it is (or was) no more, but primarily for its Diaghilev-like collaboration of artists at the height of their powers: Helpmann, the darling and undisputed star of the Vic-Wells company, 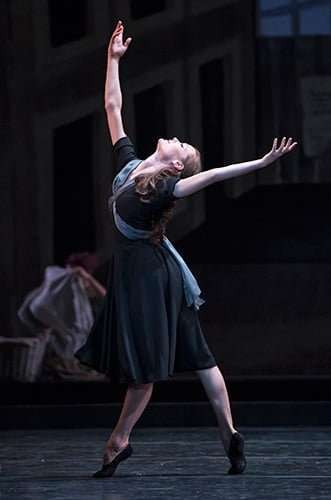 Edward Burra whose canvasses of the working classes amongst others place him in the premier league of twentieth-century British artists, and Arthur Bliss, whose star has now dimmed somewhat, but who was, in 1944, one of this country’s foremost composers. It is a cyclic morality play representing Christ reborn and re-living elements of His Passion. At its centre was the mesmerising performance by Helpmann himself as the Christ-like figure who walks among the tenement dwellers of Glasgow’s Gorbals, raises a girl from the dead, and is killed at the behest of the jealous minister (not originally billed as such but rather as The Official). A work depicting sin and redemption among ordinary folk resonated greatly with audiences for whom such existential questions were at the forefront of their minds as German bombs rained down, threatening to put an end to it all.

Nothing of Helpmann’s work remains, despite the best efforts to coax memories out of the shrinking constituency who appeared in the work, so Dame Gillian Lynne, herself a dancer in subsequent revivals, has sought to capture the flavour of this totemic ballet. She is extremely successful, and only momentarily are their overt Lynne-isms reminiscent of her own work in musical theatre, while she artfully evokes the bustling, grimy slum where this tragedy is played out. There are moments of stillness and calm where the movement seems more ‘authentic’ not least by Delia Matthews whose suicide girl is intense and focussed, especially in her pre-suicide solo, and Elisha Willis’s post-redemption solo for the Prostitute, both essentially focussing on plastique and gesture rather than pure dance, and both very much feeling ‘right’. All praise to the entire company, not least Michael O’Hare as The Beggar, whose witnessing of this particular road to Calvary is particularly telling.

No-one can seek to evoke Helpmann as The Stranger (having spoken to several who saw him perform this role, a wise choice), and so César Morales gives a very different concept that nonetheless underlines his otherness. One of this company’s greatest strengths is its tight-knit quality as an ensemble, and Lynne has brought out this quality in the large cast who interact convincingly as people who live hugger-mugger in less than salubrious surroundings. Adam Wiltshire’s designs after Edward Burra are superb, from the striking image on the front-cloth of a ship in dry-dock to the single set of tenements stretching back to the belching chimneys of industrial Glasgow, and the rubbish-strewn pavements. Costumes are varied and convincing, making for an entirely satisfying stage-picture. The crowning glory is Bliss’s hefty score, which was played with resonance and weight by the Royal Ballet Sinfonia under an impassioned Paul Murphy. After the success of Checkmate for the Vic-Wells in 1937, the composer was eager to work on further ballet scores, and poured his full invention into this magnificent composition, full of vitality and supporting the libretto with genuine force and invention. 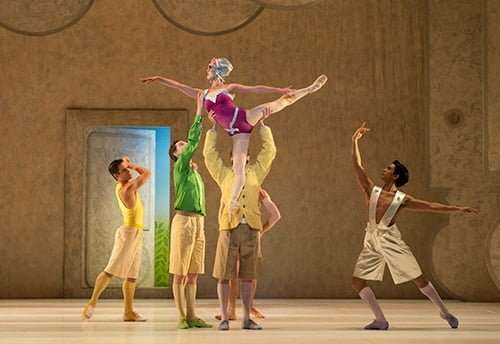 Gorbals was preceded by a more-than-decent performance of Kenneth MacMillan’s 1979 La Fin du Jour, jauntily dressed in Ian Spurling’s eye-poppingly colourful costumes. It is an evocation of the Bright Young Things of the 1930s, and the choreography is packed with visual references to the fashion, sport and notable activities of the time, from golf and tennis poses to the form of Rolls-Royce’s The Spirit of Ecstasy. Set to Ravel’s glimmering Piano Concerto in G Major, it is a quirky, very individual reaction to the music, using a wide range of movement styles, from mechanical marionettes to mirror the Concerto’s extraordinary opening orchestral section to a pair of be-goggled women (the stylish Nao Sakuma and Maureya Lebowitz) lifted and swirled around by ten men in an evocation of the aerial achievements of Amy Johnson and Emilia Earhart as well as the racing drivers of the time.

With the men in tails (in boiled-sweet coloured satin) and the women in shingled wigs and pleated chiffon culottes, the final section moves into the world of Fred Astaire and Ginger Rogers – here both Jamie Bond and Mathias Dingman distinguished themselves with their stylish dancing and partnering. But, as ever with MacMillan, there is always a dark side – during the first movement random men fall to the floor and twist into a pose used later by the choreographer for the dead of the trenches in Gloria and at the very end, the open door at the back of the walled set which opens onto a garden of flowers is closed – Europe was to be plunged yet again into war and the insouciance of the 1930s was to come brutally to an end. La Fin du Jour is a difficult work to bring off – it requires both precision and chic; the matinée cast which I have reviewed here was more successful than its first night counterparts. 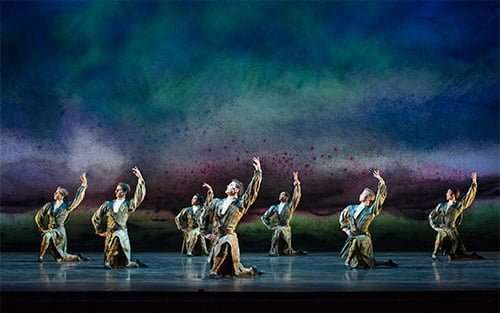 To close, David Bintley’s early Flowers of the Forest, a quick-footed evocation of Scotland. I am glad to have seen it again after so many years – with it the choreographer gave clear notice in 1985 of his talent for constructing dancing of the highest quality fully within the English tradition as established by Frederick Ashton and furthered by MacMillan. The opening section to Arnold is jaunty, fast and hugely enjoyable as a balletic view of bonnie Scotland – the six dancers were uniformly good, with James Barton and Oliver Till’s drunken episode superbly rendered and Iain Mackay as a dashing leader of the revels – his pas de deux with Nao Sakuma was as smoothly danced as could be. The mood darkens with Britten’s Scottish Ballad, and Jon Goodwin’s clever backcloth, having evoked the greens and purples of heather-strewn moors also darkens to take on more bloody hues.

Without being obvious, Bintley shifts his choreography to conjure up the warriors of Flodden, the movement acquiring more weight and emphasis, the poses becoming increasingly reminiscent of battle and injury. It is an artful juxtaposition with the Arnold and the lighter mood of the first section, although Bintley ends with a dancing climax where dancers from both sections combine to whirl and leap. It makes for a strong end to what is a strong trio of ballets.