Another curiously constructed triple bill from Birmingham Royal Ballet – the first was too samey and this second offering could be accused of lacking any coherence – three works seemingly randomly thrown together; the finest triple bills take the audience on some form of journey and allow the component works somehow to benefit from their juxtaposition with the others. 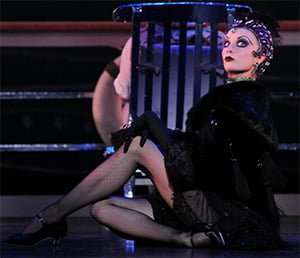 David Bintley’s decision to revive the inconsequential Grand Tour from 1971 is so bizarre as to defy explanation – it is Hollywood choreographer Joe Lane’s excuse for a great deal of campery to a selection of Noël Coward songs, soupily and brashly arranged by that master of musical subtlety Hershy Kay. The premise is so brittle as to be unable to support its own weight: a transatlantic crossing (John Conklin’s deck design carries some glamour), which sees a clutch of 1930s’ notables come together under the bemused eye of an American woman who, for some inexplicable reason, is made to walk around as if martyred by the worst case of piles this side of Ellis Island. As if the opportunities for camp were not maximised by the evocation of the likes of Theda Bara, Gertrude Lawrence and Coward himself, Lane throws in a pair of Am-Dram Italian stowaways (brightly danced by Laura-Jane Gibson and James Barton). Nothing much happens, as each of the stars does his or her little ‘number’ and a quartet of stewards in bum-hugging white trousers strut about. It is seriously dated stuff, the humour heavy when not leaden and fails now to engage the audience (if it ever did). All praise to the dancers, who entered into it all with commendable gusto even if they could not escape the smell of turkey wafting into their nostrils. Joseph Caley was a delight as Douglas Fairbanks, all hands-on-hips, teeth flashing bravado, and Matthew Lawrence bravely overcame the challenge of having to mouth the words of ‘Half-Caste Woman’ to a recording of Coward himself. Callie Roberts was sensational as the vampish Theda Bara, luxuriating in the best costume and make-up of the night, but pity to Valentin Olovyannikov having to portray a randy, hand-wandering Bernard Shaw à la Jimmy Saville. Quite what happened to Rory Mackay as a bean-pole Gertrude Stein in charity shop cast-offs, I will never know. Muted applause – Grand Tour needs to be left in a corner to rot. 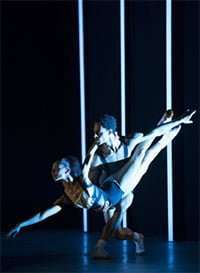 David Bintley’s Faster is his Olympic ballet, and brims with sporting imagery and movement. It is a laboured and unimaginative work, a far-cry from his own early Choros which deftly evoked the sporting competitions of ancient Greece. Christopher Bruce created a wonderfully witty and entertaining Olympic ballet earlier this year with Dream, showing us how the normally mutually exclusive worlds of sport and dance could be linked. Bintley’s response is nowhere near as successful. At least he has a tremendously powerful commissioned score by Matthew Hindson, who has created a work of real distinction, using a large orchestra to create extraordinary tonalities, rhythms and effects. Becs Andrews has given the dancers ‘sporting’ outfits, some more successful than others – the breastplates given to the female ‘fencers’ made them look more like turtles – but were essentially variations of the theme of wrestlers’ singlets, which the young and toned BRB dancers wore with distinction (loathsome are the grubbily-clad basket-ballers which merely underline that game as ghetto-sport). There was one gladiatorial costume number in what looked like black leather for which there could be no sporting justification. A dull and extended pas de deux for Céline Gittens and Tyrone Singleton on the theme of injury and recovery consisted of much sweaty grappling but the luminous trio in white (Feargus Campbell, Jenna Roberts and William Bracewell), which evokes gymnastic,s showed Bintley at his inventive best, not least in the extraordinary lifts he has created for his dancers. The final movement was the least successful – to Hindson’s pulsating music, the dancers ran and ran in varying styles, but it was still running. This does not flatter the dancers – their bodies look uncomfortable – many do not run with their heels hitting the ground first and they have turned-out legs, which can create a strange effect; putting them in large, brightly-coloured trainers also makes their feet look simply enormous, which they are not. 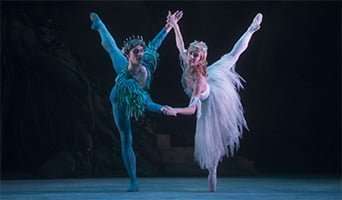 Then to Frederick Ashton’s The Dream. This performance was very much a curate’s egg as pleasures and niggles abounded. BRB dance this work with a natural feeling for its intricacies, and the stylistic precision of the fairy corps and the speed of Titania’s quartet of attendants was gratifying. The unforced portrayal of the rustics in this production (the company has performed the work since just a year-and-a-half after its creation at Covent Garden in 1964) was likable, most especially Feargus Campbell’s endearing Bottom. Less comfortable was the quartet of lovers, who missed much of the timings for their comedy and were stylistically at odds with each other: Matthew Lawrence’s Demetrius had not quite shaken off his Coward in the Grand Tour earlier in the evening and Brandon Lawrence and Callie Roberts were expressionless. Only Ambra Vallo impressed as a diminutive, ditsy Helena, although she needs to reign in her open arabesques as a matter of the utmost urgency – it is simply not Ashtonian and ruins the choreography. Tzu-Chao Chou has bags of technique and bounce to spare as Puck, but he smudged much of the upper body detailing and grinned his way manically throughout, which is not quite the thing; there is more to Puck than being a sylvan version of the dreaded Soviet Swan Lake Jester. Natasha Oughtred’s filigree Titania was impressive: she was careful in her performance of all the nuances, and successfully caught the Ashtonian contrast between quick legs and feet and a more melting upper body. That said, she needs to be more farouche, more other-worldly in her interpretation; it was rather low-wattage.

William Bracewell is an exciting young dancer who is fulfilling his promise since winning the Young British Dancer competition in 2007; tall, elegantly proportioned, with long legs and eloquent feet, and a pleasing line in arabesque. Oberon is a big ‘ask’ of him both technically and interpretatively and his performance was, quite understandably, a first sketch, although not lacking in finely delivered moments. If he tired during the fiendish scherzo, it was not altogether surprising given his inexplicable scheduling in Faster before the interval – whoever decided on that was not exactly giving this young man the best of chances. As yet there is much about Oberon that eludes him, not least that he delivers much of his mime and, indeed holds himself, as a classical Prince, rather than the spiteful King of the Fairies. He is tall, and it was a clear effort to get himself around the choreography made originally for the shorter and quicker Anthony Dowell. Most importantly, the contrast between the required rapidity of feet and legs and the more serene upper-body needs to be worked on. This notwithstanding, this was a notable debut . His is, I would venture to state, a name which will become a great deal better known over the coming years.

The setting looked a little tired, and the presence of a front scrim throughout the ballet is to be regretted, as it distances the dancers from their audience (they can only see a grey ‘wall’ before them).

Philip Ellis, as he had throughout the evening, led the Royal Ballet Sinfonia in a fine performance. They are a very good, and, what is crucial for dance, an interested ensemble, who unfailingly contribute much to performances with music-making of both spirit and engagement.