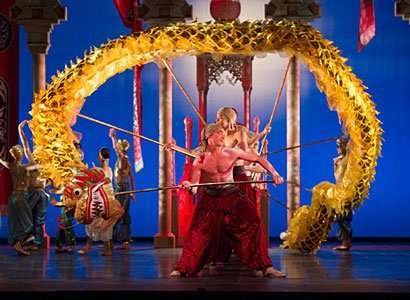 David Bintley has made clear from the outset that this ballet is an attempt to add another family-friendly full-length work to the repertoire, which will ensure full houses and healthy takings. In the terms of his own brief he has succeeded, as Aladdin is a hugely enjoyable night out, more than a little retro admittedly in certain respects in terms of taking the art form ‘on’, but in truth succeeding in creating good old-fashioned entertainment.

Carl Davis’s score (composed for Scottish Ballet at the turn of the millennium) is beefed-up, and presents a lush filmic soundscape, a ripe accompaniment to the broad-brush strokes of narrative and choreography. At times it is almost too much in its eastern sonorities, too bold in its orchestration, but in essence it is a fine musical backdrop for the action. The sets and costumes are ravishing, Dick Bird’s simple yet sophisticated evocations of a steamy bathhouse or the Sultan’s palace quite beautiful, and Sue Blane’s costumes are richly made, sumptuous of cloth and generous of cut. To set it all off is Mark Jonathan’s quite superb lighting, creating atmosphere and subtlety while at all times allowing the audience to see every move with the utmost clarity. 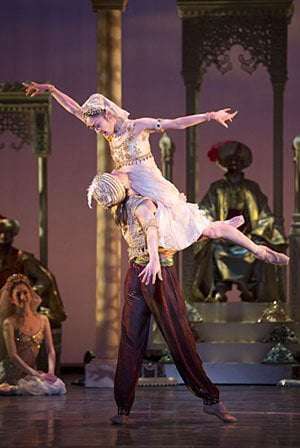 Bintley is a fluent choreographer, sure in his classicism, and expert in filling a stage. It is all very good, but ultimately lacks the last ounce of creativity and individuality which would mark out truly great choreography, which lifts classroom enchaînements into something altogether greater. Nowhere is this felt more keenly than in the two pas de deux for Aladdin and the Princess Badr al-Budur, which never quite take flight. But there is much to enjoy, from Jamie Bond’s cheeky jack-the-lad Aladdin to Jenna Roberts’s gazelle-like princess, her long limbs seen to great effect in Blane’s beautiful costumes. Tzu-Chao Chou as the Djinn bounced, leapt and spun with relish, his gestures broad, his acting fruity, and Iain Mackay, the Company’s danseur noble clearly relished the change in an acting role, his Assyrian make-up and costuming superbly realised as the boo-hiss Maghrib baddy who tries to command the lamp. 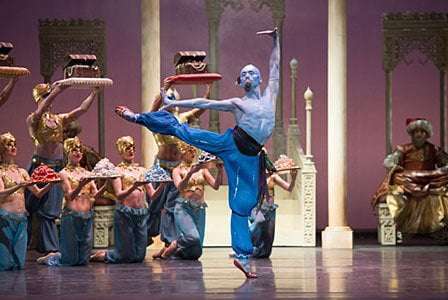 Marion Tait, whose performances as the company’s reigning dance-actress twenty years ago I still cherish, plays Aladdin’s diminutive mother with both Buster Keaton’s deadpan face and his comic timing; it is a performance to savour indeed. Bintley has added much couleur locale (though which ‘locale’ is hard to tell with a Sino-Arabo-Perso-Ottoman aesthetic), with Lion and Dragon dances as well as a superbly achieved flying carpet to convey the happy couple back to Old Peking. The company are on exuberant form, and well-shown-off in Bintley’s cheeky Petipa-lite jewel divertissements in the treasure cave; Joseph Caley was likeable particularly, and cool Momoko Hirata as the Rubies, too, as well as Brandon Lawrence’s high, clear jump as an Emerald.

In Aladdin, Bintley is clearly having a ball, freed from having to create ‘art’ and simply enjoying making dance theatre – all his cheeky nods to countless other ballets, from Scènes de ballet to Daphnis and Chloe are there, and it will help fill the coffers of this deserving company (it is funded entirely without state contributions).