The Taming of the Shrew – ballet to choreography by John Cranko after William Shakespeare’s comedy, with music by Kurt-Heinz Stolze after Domenico Scarlatti 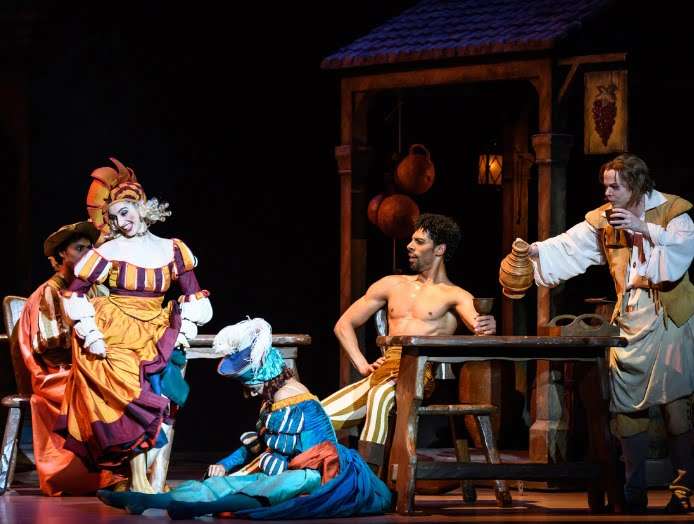 John Cranko is at risk of becoming something of the forgotten Triumvir in British ballet, the Crassus to the Caesar of Ashton, and the Pompey of MacMillan and his work: when performed at all in the UK, is now limited to very few works (Onegin, Pineapple Poll). Yet his choreographic style, his aesthetic, and his artistic sensibilities are all suffused with his training and experiences here in Britain, and he stands as one of the finest dance makers these islands have nurtured.

This revival of his 1969 The Taming of the Shrew by Birmingham Royal Ballet as part of the company’s marking of the Shakespeare’s quarter-centenary is doubly welcome – Cranko is a great choreographer who, in this work, confirms himself as one of the very few who can ‘do’ comedy. The key to his facility in making us laugh comes from his experiences in revue; throughout the 1950s he was known for his work in this area rather than classical ballet – Cranks was a hugely successful show which had a long run in London in 1955 and brought him a wide audience. In Shrew, we can see a choreographer who understands comedy, and the constant inventiveness in silly walks, visual gags and use of props shows great familiarity with theatre outside the ballet studio and stage. 47 years after its creation it comes up fresh as ever, a ballet rich in opportunity for dancers to explore and develop their dramatic and comedic gifts, a broad-stroke, bawdy work full of fun for audience and performers alike. 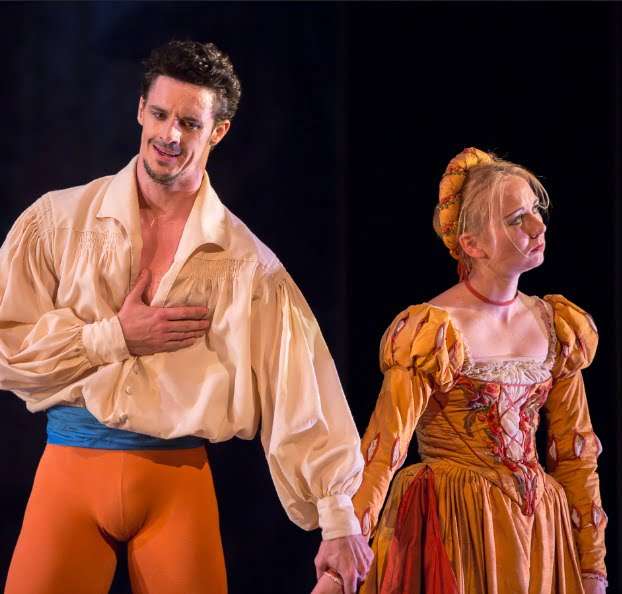 And BRB does it proud. This is a fine company whose dancers perform as such, close-knit, aware of each other, working to a common goal. Cranko provides many opportunities to shine, from the delightful speedy, fancy footwork of the final scene pas de six to the three suitors of Bianca: the preening Hortensio of Chi Cao, relishing his character’s wrong-footed narcissism, was a delight, as was the muddle-brained Gremio, here in Rory Mackay’s glorious interpretation. Mackay is a company stalwart, an intelligent and hard-working artist who is finding success in demi-caractère and caractère roles – his was a performance to treasure. Brandon Lawrence is still a First Artist (one up from corps de ballet), but on the evidence of his Lucentio, that should not last much longer. He is tall and handsome, a strong, solicitous partner and blessed with long, articulate limbs and a strong, clean technique: jumps are high, the line sure, and footwork neat and precise – he has the words ‘ballet prince’ emblazoned upon him. His romantic duets with Jenna Roberts’s Bianca were a highlight of the ‘pure’ dancing in this ballet, Roberts matched well with him, a ‘clean’ and unfussy dancer with a sunny stage disposition.

But Shrew stands or falls on the central couple of Petruchio and Katherina, the latter the eponymous (anti?)-heroine, the former her tamer. Elisha Willis has danced for many years with BRB and proved herself to be a versatile performer, appearing in the widest of repertoires, but she has not often stamped herself on her roles, so, with her retirement looming, it is doubly pleasing to be able to report that in Katharina she finds a role in which she can let go and invest herself fully. One can almost see her delight at misbehaving, stamping on feet, pushing people over and gleefully ruining everyone’s best-laid plans.

In Iain Mackay, BRB’s reigning male Principal, she finds a perfect foil. The tall Mackay, strong both as a dancer and partner, makes light of the technical demands made by Cranko on the prodigious Richard Cragun in 1969, lifting her aloft with insouciance, blasting through fiendish combinations of steps, but also he sounds the right note in character terms, full of braggadocio and hip-swinging swagger, yes, but also allowing the subtler sides to his character to be seen. Mackay is a refined artist, so he too clearly enjoyed throwing his head back in full-throated (silent) laughter, the cavorting with local town whores (as billed in the cast list, Delia Mathews and Angela Paul suitably comic-book) and his manhandling of Willis’s very prickly customer. He and she made for an exceptionally well-matched pairing and served as the touch-paper for what was a fizzing performance.

Kurt-Heinz Stolze’s arrangements of Domenico Scarlatti have been criticised since the ballet’s premiere, but they work in a strange way, and only at isolated moments are they just a little too academic. Philip Ellis was alert and driven on the podium, the company orchestra responding to his engagement. Susan Benson’s designs are more grandiose than the originals, her sumptuous costuming rich in both detail and colour, the simple sets of stairs and colonnade establishing place and time with economy of means.