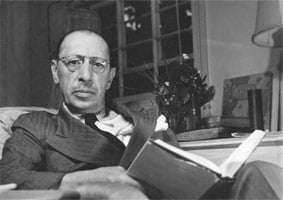 Igor Stravinsky’s contribution to the world of ballet is immense. Perhaps more than any other composer, Tchaikovsky included, he took forward the dance and inspired choreographers of note, not least Fokine and Balanchine, to create works of genius. Birmingham Royal Ballet presented a meaty triple bill of three wonderful scores, all from Stravinsky’s early, European period: two surviving dance works from the now legendary Ballets Russes, The Firebird (1910) and Petrushka (1911), and one commissioned by Ida Rubenstein and premièred in 1928.

There are few ballets whose ghosts inhabit the roles they created more than in Petrushka, like the spirit of Petrushka taunts the Showman at the end of the work, Nijinsky’s blank stare and straw doll pose as the eponymous puppet are burnt into the balletic consciousness and it is a tall order for any dancer to assume the part. And yet, assume it they must. This is precious work from that time of white-hot dance creation, and a reminder of Diaghilev’s mantra of Gesamtkunstwerk – the Benois setting and costumes, the Fokine choreography and the Stravinsky score coalesce into a masterpiece. It stands or falls on that title role, and Saturday afternoon was lucky indeed to see Jamie Bond’s assumption: his angular, mournful face is ideal for the melancholy puppet, his limbs truly filled with straw, his simple love for The Ballerina painfully rejected, his fear and hopeless defiance of The Moor clearly and movingly conveyed. The company has a tradition of fine Petrushkas, not least their present Director David Bintley, and Bond has joined their ranks. I loved Robert Gravenor’s funny and simple-minded Moor and Vallo’s air-head Ballerina. The company could perhaps enter a little more into the chaotic Russian-ness of the Butter Fair but it is a minor quibble. The only disappointment was the characterless and over-young Showman from the talented Jonathan Payn – it simply needs an older man to convey greater weight and sense of mystery.

Michael Corder was understandably drawn to the toothsome score of Baiser, a work which had already attracted Balanchine, Ashton and MacMillan. Corder is a fluent and agreeable choreographer, who never makes an ugly move, and who is capable of invention and beauty. I felt his choreography was at once delightful and slightly vacuous – I felt that the Fairy’s moves were insufficiently different from The Bride’s – the mortal and the supernatural must be clearly differentiated. I felt also that the narrative is too sketchily drawn (and I rarely complain about too much dancing) with the choreography taking place often in an unclear setting. Corder was not helped by a pretty but rather inexpressive cast – Cummerfield was neither malevolent nor irresistible, Caley was merely the generic young hero, impressive in his ability to cope with everything demanded of him, but somewhat blank of expression and Sakuma fleet of foot, but often grimly determined to get through the steps. 50 minutes is a long time for a single act ballet, and the work has its longueurs, despite Stravinsky’s Tchaikovsky-inspired score.

The Firebird is another Ballets Russes survivor and was illuminated by the flashing assumption by Carol-Anne Millar of the title role. She conveyed the wild nature of this bird, proud, unpredictable, and dangerous. Alas, Matthew Lawrence played the Tsarevich rather in the manner of Jim Dale in some Doctor in the House film – he is not a larky young man, but a prince who will assume his destiny to be Tsar. It is a difficult role and one which needs command of the stage, an impressive manly walk and dramatic intensity – it was, after all, created by Fokine himself. Likewise the pallid and choreographically sketchy Tsarevna from Angela Paul who seemed at a loss as to what to do with this deceptively simple part. I loved Michael O’Hare’s sprightly, malevolent Kostcheï, who was alive to everything around him and acted with freshness and clarity. The cast entered gamely into the spirit of the whole affair and delivered a performance of great intensity.

Finally, three cheers for the Royal Ballet Sinfonia, which threw itself into what is an exhausting programme and made the most of this rich early-Stravinsky feast. It played with great sensitivity and aplomb and contributed positively to the mammoth performance of three and half hours. A long programme – but so rich and rewarding.