Harrison Birtwistle
Yan Tan Tethera – A Mechanical Pastoral in one Act to a libretto by Tony Harrison [concert hall staging; sung in English and northern dialect, with surtitles] 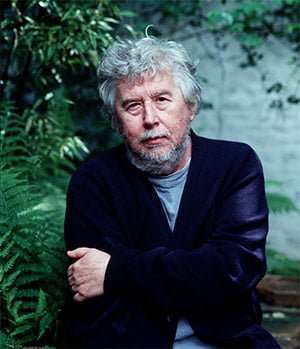 In the “Birtwistle at 80” retrospective at the Barbican Centre, the BCMG’s concert a few days earlier touched every decade in the composer’s career save for the 1980s. The LSO’s contribution and this, the first of two Britten Sinfonia concerts, made amends with two of the works from what might be termed Harrison Birtwistle’s annus mirabilis – 1986. As Paul Griffiths reminded us in his programme note, that year saw the long-awaited premiere of The Mask of Orpheus at English National Opera, and both Earth Dances and Yan Tan Tethera, the latter described as a “mechanical pastoral”.

Yan Tan Tethera was commissioned by the BBC, and completed in 1984, but was dropped (seemingly deemed to be too expensive). However, it was taken up at the Queen Elizabeth Hall by Opera Factory, directed by David Freeman as part of Summerscape in 1986. Channel 4 came to the rescue and broadcast a studio recording of the production in 1987, which was simultaneously broadcast in stereo on Radio 3 (both a unique – even to this day, I think – collaboration and also seemingly forgotten by both Griffiths and also David Beard in his recent study on Harrison Birtwistle’s Operas and Music Theatre (CUP, 2012), let alone all the other books on the composer; and then Opera Factory revived its production in 1992. And that was that, until this concert staging, directed by John Lloyd Davies, who recently marshalled Gawain. Our hero Alan may have been incarcerated under the great hill for seven years; but I realised that I had been made to suffer over three times as long before being able to hear this glittering score again.

There were certain design elements common to these concerts of Gawain and Yan Tan Tethera – principally the silver-bordered black triangles: large at the back (here representing the sarsen stones in which Alan is incarcerated by the Bad’Un) and a smaller one in front of Baldur Brönnimann’s podium, as well as screens on either side of the stage – here filled with stone circles – signifying shifts in the story. Compared to the gargantuan orchestral forces required for Gawain, here the much smaller ensemble afforded much more space – and at either side of the forestage were two sloped, square platforms. Stage-left was white with a black swirl (rather like an elaborate question mark) whereas stage-right there was a black background with a white swirl. A wavy white trail conjoined the two and these marked the respective haunts of two shepherds: Alan (Roderick Williams), from the north new to the area with his pregnant wife Hannah (Claire Booth), and Caleb Raven (Omar Ebrahim), the local bod jealous of the newcomer’s success. Behind the Britten Sinfonia were the female chorus of ewes – with white masks, and one male ram, in a black mask.

One of the most memorable aspects of the original production was the way the chorus moved round the set to don either white sheep masks to be Alan’s flock or black masks (with bells) to be Caleb Raven’s flock; indeed Birtwistle’s instrumental interludes were brilliantly used to accompany this recurring ritual. Having the chorus at the back – not changing their white masks for black and not moving round – stripped away the effect of teeming life on the otherwise rather barren Wiltshire plain where the story is set. The cast – again partially score-bound as in Gawain – did its best to enliven proceedings, especially Daniel Norman as the mysterious piper haunting Alan’s waking moments and going into cahoots with Caleb Raven to incarcerate Alan into the stones marking Adam’s grave (to which he led him like the Pied Piper of Hamelin), revealing himself to be the Bad’Un, complete with red gloves and shoes.

But Caleb Raven’s hopes of wooing the bereft Hannah, having also removed her twin boys after birth and incarcerating them with their father, fail. She – intoning the ‘yan tan tethera’ charm taught her by Alan – waits seven years before Caleb Raven crumples and produces two black-haired boys for her. They are the same age as her two sons would be, but are not them, though she accepts them as hers to get them out of the influence of Caleb Raven. They tell her that her own twins will be released the following day, on their seventh birthday, and when the blonder-mopped pair appears they announce the return of Alan. What remains is Caleb Raven’s abject resignation of defeat, his adoption of the northern way of counting and his self-incarceration in the sarsen stones.

Infused with typical Birtwistle tropes – the repetitions of not only counting but Alan’s charms, the sheep’s utterances (individual lines spoken over the choral music) and the cyclical passage of time (the seven years Hannah waits) – this is like a microcosm of the composer’s style. Compared to his other major stage works, it is not based on an established myth, and even its time-period is intriguing. Set among Wiltshire’s prehistoric tombs and stone circles it may be, but it’s early medieval at the earliest, as Caleb Raven has stolen the church bell to make his own for his sheep. Amidst the repetitions (“Yan tan tethera, one two three, sweet trinity” has been a family chorus since we saw the original production), Birtwistle’s instrumental lines glisten and gurgle: a landscape unto themselves, and here – after 22 years – as welcome as a homecoming. Performances were universally excellent, not least the quartet of boys from Tiffin School Kingston, all members of the Tiffin Boys’ Choir, singing without scores. And – like John Tomlinson in Gawain – there was a member of the work’s original cast, although here Omar Ebrahim was not singing the role of Alan, which he created, but the darker-hued role of Caleb Raven.

I hope we don’t have to wait another Tan Jiggit (that’s 22 in northern counting dialect) years to hear it again, but we will have to wait for a first recording – regrettably there were no microphones present to ensure future enjoyment until another live outing…