Under a Hellenic sun, with indoor temperatures apt for the subject matter (the recent refurbishment of Blackheath Halls didn’t go so far as to install air-conditioning), Blackheath Opera returns in two senses with this new production of Offenbach’s La belle Hélène in honour of the composer’s 200th-anniversary. It was a return to the venue after last year’s sojourn in Deptford; and a return to classical mythology, turning the clock back a generation from last year’s subject, Purcell’s Dido and Aeneas. From the aftermath of the Trojan War, here we got back to the origins of the War, albeit seen through the humorously skewed vision of Meillac & Halévy but also Jeremy Sams. 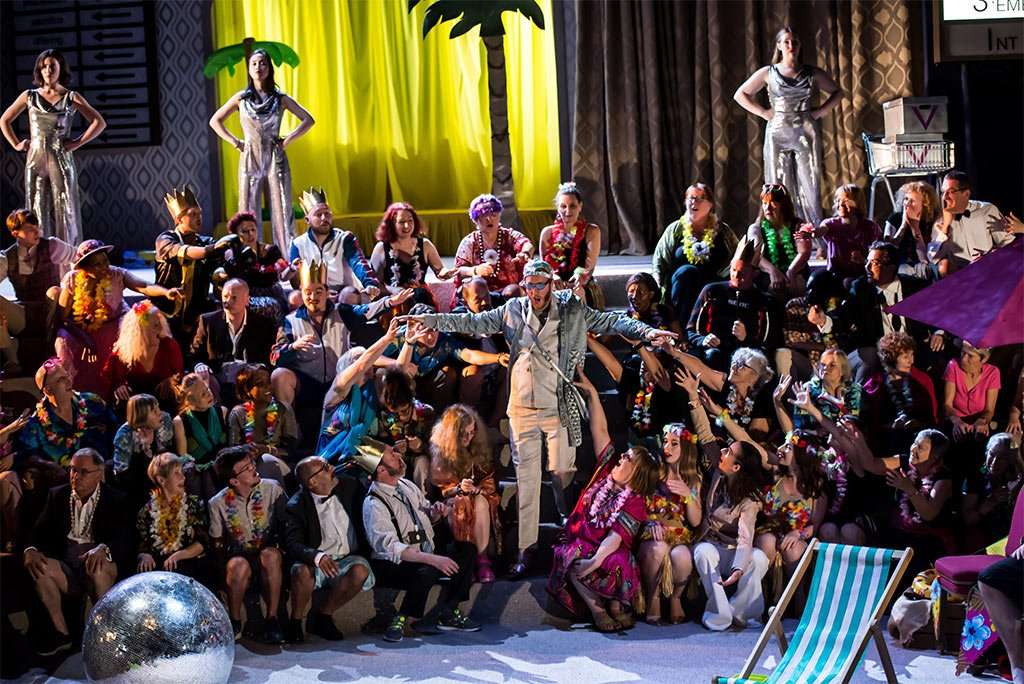 But in another sense this marks a new direction. It’s the first operetta in the company’s twelve-year history and marks the company’s debut of Christopher Stark, who throws himself into the action (when Menelaus steals his baton and he goes to get it back).

James Hurely – returning as director following Idomeneo – and designer April Dalton embrace the possibilities of the refurbishment, particularly the flattened (though still high) stage and the raked seating, so that for the first time in my ken we are sitting as in any other venue, facing the stage, with a wide apron before it – half-filled with the orchestra and the other an extension of the acting area. Steep steps rise to the stage, which is decked out as a foyer to the temple of Jupiter, double doors stage-right, a long curtained area stage-left. Far stage-left a light box is divided into four, announcing the Acts and, at the bottom, “INT” – intermezzo. A similar, though larger light box is hard by the double doors; indicating where necessary the events at the temple.

We’re in Sparta, realm of King Menelaus and his queen, Helen. The assembled crowd is waiting for the festival of Adonis, vying to see Helen and her entourage, while head priest Calchas (bearded Ben McAteer) busies himself with organisation. All the gossip is about the contest on Mount Ida, where young Paris handed the golden apple to Venus as the most beautiful of three goddesses (over Minerva and Juno – curiously they are given in their Roman rather than Greek names: Aphrodite, Athena and Hera). Helen, aware that Venus’s reward for Paris is the “most beautiful woman in the world”, finds herself bored of Menelaus and excited by the oft-quoted ‘hand of fate’ and what it might bring. In Ellie Laugharne’s hands, Helen is a flighty blonde with a steely determination and a ringing voice to match.

Her Menelaus, a dull dogsbody in shirt and tie, bicycle helmet and carrying his folded bike, is played with a downtrodden, hang-dog look by Joseph Shovelton; something of a square compared to the preening buffoons of the other amassed kings – the over-active twins Ajax I and Ajax II and puffed-up Achilles, with sculpted if false six-pack, and pompous, uniformed Agamemnon played with stiff-backed precision by Nicholas Merryweather. Agamemnon’s son, Orestes – a trouser role, here in outrageous bell-bottoms – is swaggeringly commandeered by another Trinity Laban vocal student, Rachel Maby.

In comes Oliver Johnston’s ardent, winning Paris, who turns all eyes, especially when he easily sweeps the laurel at the Games, which Agamemnon has decreed will be intellectual and not sporting (putting all others at a serious disadvantage). The crux of this frothy retelling is how Helen first falls for Paris’s plan to get Menelaus out the way (with Calchas’s help sending him off to Mesopotamia for a holiday) at the end of Act One but then, in Act Two, resists his advances, until he persuades her she’s dreaming when he seduces her. He’s come bearing Virtual Reality goggles (and already retold his story about the goddess’s competition to Calchas by putting them on the High Priest) and Helen dons them as well. But Menelaus returns early and demands answers, even though Paris escapes.

Venus has enacted revenge on Greece by plunging it into hedonism, while Menelaus and Helen still aren’t reconciled. Agamemnon (wet-suited and in flippers) and Calchas (dressed as a pirate) persuade Menelaus that for the good of Greece he needs to let Helen go with Paris and so appease Venus. Disguised as Venus’s own High Priest, Paris arrives to say that if Helen goes with him to Cythera and sacrifices one-hundred bulls all will be well, and Offenbach conspires in a happy ending, while blissfully ignoring the horrors to come.

Rather than the normal in-the-round style of production, this year Blackheath Opera has gone for a ‘vertical’ staging on a number of levels. Diction was less easy to catch from those singing from the floor, especially in the opening chorus, though my ear settled down quickly and in general audibility was extremely good, confirming the decision not to use surtitles. Under Stark’s clear and steady direction, the orchestra makes a fine noise. What the upper strings lack in a little sweetness, the woodwind and brass compensate with a joie de vivre that perfectly matches the operetta.

With its cavalcade of community participants (the children having fun with spelling cards, first sorting out Agamemnon’s name, then later Mesopotamia), all of whom require a number of costume changes, the logistics of this staging are mind-boggling enough. With technical demands high too – the chorus-members have to set up and lay a number of tables and chairs and then dismantle them as silently as possible – it is surely Blackheath Opera’s most ambitious undertaking yet. To send audiences away in as much a reverie as Paris’s VR goggles promise (and which most of the chorus end up wearing – a present from Venus) is a major success. It’s colourful, frothy, ridiculous and hugely enjoyable, the most heart-warming experience of my opera-going year.