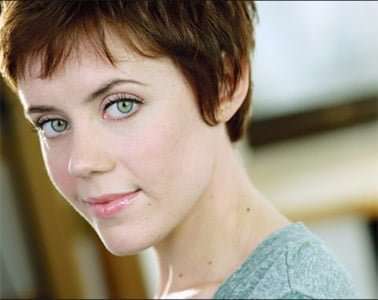 Ruth Leon, who seeks out the cream of cabaret performers and books them into the beautiful Crazy Coqs room, discovered Carole J. Bufford a few months ago at New York’s cabaret convention, and she was astounded at the talent she beheld. In fact, when she introduced Bufford to the audience on the newcomer’s opening night, one wondered if any performer could live up to such effusive enthusiasm. It took little time before it was evident that here indeed is a remarkable talent.

With a touch of the gamine, the slight star was clothed in a chic black dress with a solitary sparkling diamante clip, and revealed a voice that made one tingle at its vibrant emotion, its stunning power and faultless interpretation. How pleasing to hear those powerful sustained climaxes without even a hint of the vibrato that mars some seasoned performers. Bufford states that she likes to strip songs to their “raw emotion” and favours numbers that depict the states of romance from love and lust to regret and revenge, and she has assembled a superb selection of songs.

Bufford particularly likes the torrid emotions of the Blues, but she also includes some of the greatest popular numbers ever written, such as Kern & Hammerstein’s ‘Can’t help lovin’ that man’, Cole Porter’s ‘What is this thing called love?’ and of course ‘Body and soul’, bringing to them emotive power and extra gravitas. Bufford’s patter is fairly minimal, but pithy. She tells of the housewife who conceived the opening line for a ballad, sent it to Johnny Mercer, and ended up sharing with him the royalties for the hit song of anticipated revenge, ‘I wanna be around (to pick up the pieces, when somebody breaks your heart)’. A similar tale of tables turned informs her impassioned delivery of Arthur Hamilton’s ‘Cry me a river’, a total contrast to the famously smoky version of Julie London.

Bufford tells of a ditty in polka rhythm, written by the Sherman brothers for a sequence in Mary Poppins that featured a magic painting. This was cut from the film, but when the siblings were writing the score for Over Here! (1974), a Broadway musical featuring the remaining two Andrews Sisters and set in World War Two, they re-used the melody for Maxine Andrews’s comedy solo ‘Good time girl’ (also known as ‘The VD polka’), which warned GIs of the dangers of overseas romances. Bufford roams through the audience while convulsing it with the racy lyrics, and ponders the song being sung by Poppins!

She also gets laughs with the lament of a woman whose husband is displaying homicidal tendencies, ‘Say we’ll be sweethearts again’, a virtually forgotten piece by Earl Brent, written for 1940s’ favourite Virginia O’Brien to sing in the screen version of Meet the People. The Blues numbers that Bufford handles with great aplomb and appropriate earthiness include ‘Baby, won’t you please come home’ (benefiting from a telling verse), ‘Your kisses kill me’ and the amusing ‘Long, short and squatty’.

Such selections also showcase the terrific support she receives from Nathan Martin. The versatile Bufford can also be wistfully reflective, as in a gorgeously plaintive ‘Cottage for sale’. Her show, although including sixteen numbers, seems much too short, and too soon she has arrived at her final number, ‘Non, je ne regrette rien’, in what sounds like flawless French, her voice vibrant and passionate. Incredibly, this is Bufford’s first engagement outside the USA! She is about to become celebrated, for she has an act that can be said to define cabaret.