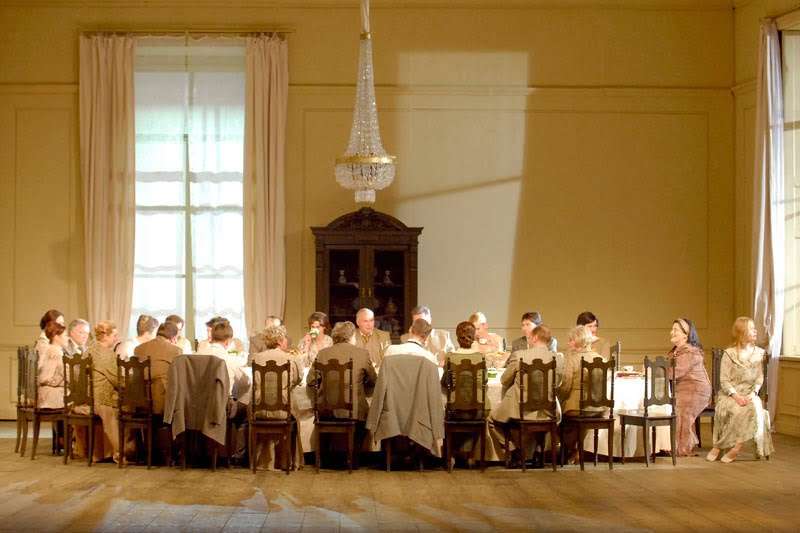 In September 2006 the Bolshoi Theatre replaced its venerable and much-loved “Eugene Onegin” – dating from 1944 – with this one, designed by Dmitri Tcherniakov. Gone was the splendid décor that was a testament to Russian Grand Opera in its best tradition, and in came, in the director’s own words “an hermetic world”, which he goes on to explain as meaning that it does not acknowledge any external environment or historical details (the whole staging being inside a grand dining room). Oh, dear!

This production is wrong on so many levels. It is all very well ‘re-imagining’ an opera, and updating, but this effort flew in the face of what Tchaikovsky wrote about. Tatyana’s bedroom does not exist, and the duel scene is a travesty (a director who treats this so poorly has no right to go near a stage again). The ‘duel’ consisted of Lensky and Onegin tossing a shot-gun between themselves across the large dining table. Then, inexplicably, they fight over it! By accident the gun fires and Lensky is dead. Ridiculous! In the previous scene, still in the dining room, Lensky twice fires the same gun drunkenly into the air, like a cowboy, to scare Onegin. Bizarrely, Monsieur Triquet’s aria was assigned to Lensky here. 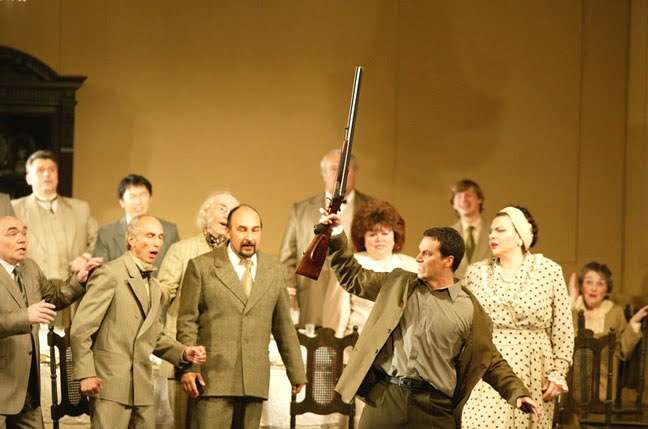 For the first part (Acts One and Two) the large dining table was at the back of the stage, the singers as far from the front as possible – why do directors insist on placing singers at the back or sides of stages where they cannot be seen, and more-often-than-not, cannot be heard either? The audience laughed when the curtain went up after the interval to greet Act Three at the realisation that the setting was the same except that everything was tarted-up (in the worst possible taste of Russian nouveau-riche) and that the table had been moved to the front of the stage: wow, such inspired direction … not!

At least the singing and playing of Bolshoi Opera went some way to mitigate these travesties. The Orchestra clearly relished the direction of Dmitri Jurowski (younger brother of Vladimir, and son of Mikhail), who coaxed polished and vibrant playing, along with, where necessary, brash (read: Russian) timbres. Conducting without a score, he married orchestra and singers with aplomb.

Tatyana’s ‘Letter Scene’ was exquisite, all her conflicting emotions explored and given vivid life. Although the opera is named after its central male character (ditto Pushkin’s verse novel), Tchaikovsky’s treatment shifts the central focus of the narrative to Tatyana, the girl whom Onegin rejects and who then marries a Prince, much to Onegin’s regret. In this central role was Tatyana Monogarova, and in her was a young woman who one felt did grow up, whereas Onegin was rather petulant throughout, though Mariusz Kwiecien made his character’s descent into despair and crazed mania at the end chillingly wrought. 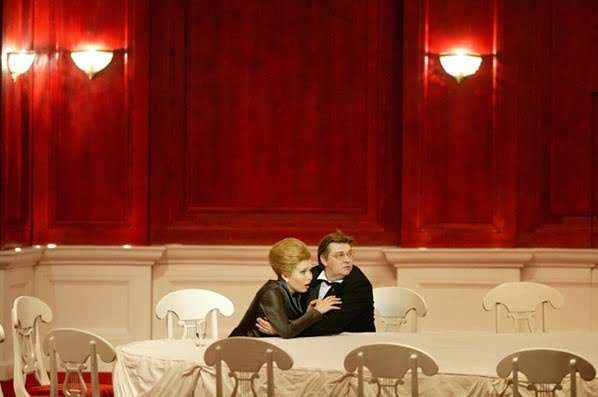 Makvala Kasrashvili (a fine Tatyana of the past) made Mme. Larina a wonderfully busy housewife, the centre of attention. The commanding presence of Anatoly Kotscherga imbued Gremin with an air of sympathy towards Onegin, and the direction afforded to him when around his wife made him a very modern husband. Nina Romanova’s Nurse was rather dowdy, though as with the other minor characters, she made her mark. The Lensky of Alexei Dolgov was bright, but as often with this character, his petulance at his perceived sleight by Onegin does not convince: demanding ‘satisfaction’ because another man (here his friend, no less) has danced with his girl is too silly.

A final word of warning: at the opening-night premiere of this production in Moscow (a gala occasion), one of the greatest Russian sopranos Galina Vishnevskaya (widow of Mstislav Rostropovich) was present. The following month a Gala evening at the Bolshoi Theatre in honour of her 80th-birthday was going to be held. She cancelled it, so utterly appalled was she at this production that she wanted no association with a theatre that would put on such rubbish. Three cheers to her for taking such a stand. ENO has signed up Dmitri Tcherniakov to produce its new “Simon Boccanegra”.