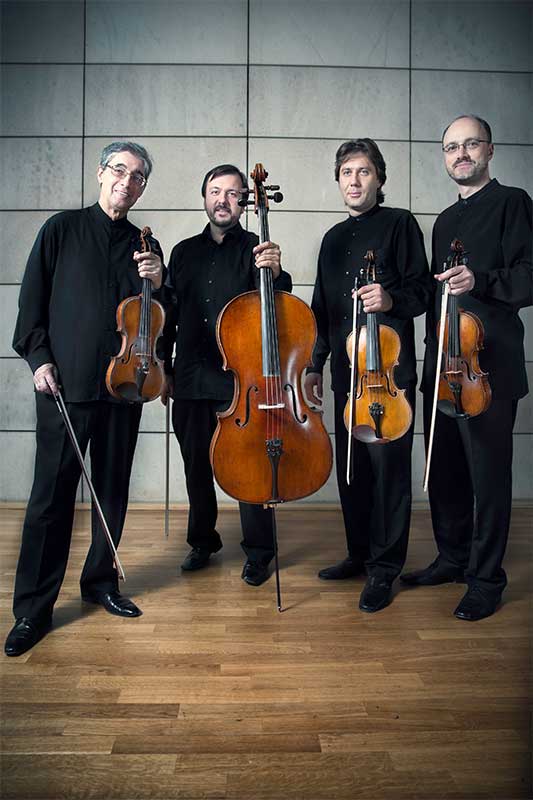 The Borodin Quartet’s Beethoven/Shostakovich marathon at Wigmore Hall continues with an absorbing, beautifully played programme of three works which do not normally grab the headlines among these two great cycles. I suppose such bread-and-butter concerts are even more revealing of an ensemble’s capabilities than accounts of the two composers’ later quartets.

These dedicated players, drawing on two centuries of Russian engagement with Beethoven’s works, lay his scores out in front of you with great clarity. In the G-major, which was the third to be written, as Paul Griffiths reminds us in his programme note, the opening seems quite undramatic, almost casual: three of the players hardly move; only second violinist Sergei Lomovsky bends into his phrases. But as the texture becomes more involved, the lovely string tone takes effect, and with the exposition repeat, the intensity deepens. The Adagio cantabile is reverentially played, with full tone, and the little Allegro insert – foreshadowing the method Beethoven will use in the “Heiliger Dankgesang” of Opus 132 – is neatly tucked into the movement’s progress. The Scherzo and Trio are both highly rhythmical in their different ways and the Finale is quite exciting, although it is not rushed off its feet.

The C-minor, fifth to be composed and the sole minor-key work in Opus 18, finds me disagreeing with Griffiths, for whom the opening movement’s “cantabile character, coupled with its moderate speed, obviates the need for a slow movement”. I think Beethoven probably found himself with an extra idea for a Scherzo or Minuet and thought it would be intriguing to use both – Opus 18 is full of experiments, witness the Finale of No.6. In any case, the Borodin Quartet’s tempo for the Allegro ma non tanto is quite brisk and works very well. Again, the exposition repeat brings a slight screwing-up of the tension and the whole movement hangs together convincingly.

The second movement could be played slightly more slowly, but their tempo is fine, the scherzoso element nicely pointed. In the Menuetto, they hardly pay any attention to Beethoven’s instruction for the da capo, about which I would like to say a few things. I am certain that Beethoven, at any rate in Opus 18, wanted the da capo of a Minuet or a Scherzo to be played twice after the Trio. In the C-minor Quartet this is particularly evident, as he asks for it to be played faster “the second time”. If it is played only once, as today’s ensembles all seem to do, the players are faced with two choices: either ignore the speeding-up instruction altogether, or speed up immediately after the Trio, which sounds strange because the attentive listener still has the original tempo imprinted on his or her mind. The Borodins seem to speed up ever so slightly, but I am not sure if this increase in tempo is just in my imagination. And so, on to the Finale, which is exhilaratingly played, not least in the coda, where they do accept Beethoven’s invitation to speed up!

Shostakovich’s Fifth String Quartet is replete with themes or motifs and two of them evidently have deep personal significance. The first is the little five-note figure – C, D, E-flat, B, C-sharp – heard almost immediately on the viola. Griffiths points out that the first four of the five notes correspond to the well-known Shostakovich four-note ‘signature’ but with the C coming first instead of third. I am sure he is right, in a way, but other commentators have observed that Shostakovich is quoting from the First Piano Sonata by his pupil Galina Ustvolskaya, one of the loves of his life.

She was presumably messing about with her teacher and lover’s signature notes and found that altering the order gave her a useful compositonal motif. By re-quoting this slightly deformed quotation, Shostakovich in turn acquired a characterful motto which he could use almost obsessively in the first movement of this String Quartet – he was also to put the first three of the five notes to good use in the Tenth Symphony. The second significant theme is even more personal: towards the end of the development in the opening movement, Shostakovich quotes from the third movement of Ustvolskaya’s 1949 Clarinet Trio. Like the motto theme, it keeps cropping up in this important but rather neglected Quartet.

The Borodins give a magnificent account of the Fifth Quartet. Ruben Aharonian’s leadership is crucial, as the writing for the violins is often very high and stressful in the Allegro non troppo. The only point of relaxation comes with the delightful second subject, beautifully introduced by Somovsky – we get two chances to hear it in its original form, as the exposition is repeated. The work is in three movements but plays continuously, the first movement’s slowish coda on the Ustvolskaya theme leading into the Andante via an extraordinary high ‘pedal’ F which the first violin has to maintain for some 29 bars. The Andante demands exceptional control from the violins and Igor Naidin’s viola as they maintain an intense, almost static mood of glacial concentration. Although there is some faster music, only Vladimir Balshin’s cello is really allowed lyrical outpourings and he plays in a beautiful but always contained way, so that the tension is never lost.

Another link takes us into the Finale, one of the composer’s best, incorporating a fairly cheerful theme related to the motto and one of Shostakovich’s Waltzes – has any other composer given us such sinister, threatening examples of this dance? The tension is screwed up almost to breaking point – Shostakovich is writing during the last months of Stalin’s fearsome reign, remember – and although a new theme is introduced, along with a return of the waltz, the slow, mesmeric ending of the work offers no hope of a better future. The Borodin members, having paced themselves in masterly fashion throughout the evening, have thoroughly earned their cheers and applause.