“Tribute to the Baseball Hall of Fame” [arr. Sturm] – Music from “Field of Dreams” by James Horner and “The Natural” by Randy Newman

Sousa
The Stars and Stripes Forever 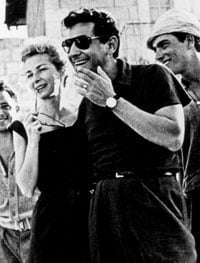 The Boston Pops paid tribute to both Leonard Bernstein and baseball, and offered a small dose of Brahms in this highly varied program, the orchestra’s final Symphony Hall concert this season. The program followed the Pops’s usual format: three distinct sections (with the heaviest piece sandwiched in the middle) showcasing the work of American composers and soloists, incorporating video and other visual media, and closing John Philip Sousa’s The Stars and Stripes Forever, the obligatory finale for Pops concerts since 1899.

As part of the orchestra’s season-long tribute to Massachusetts-born and bred Leonard Bernstein, the concert began with a solid performance of John Williams’s For Lenny, accompanied by a montage of photos from Bernstein’s life projected above the orchestra. This was followed by a lively account of the suite from Bernstein’s music for the ballet, Fancy Free. The most memorable moments of this section of the program – and the concert as a whole – were provided by the orchestra’s perfectly tempered reading of the Suite from On the Waterfront, the 1954 film for which Bernstein provided the music, with its haunting opening theme and the clean-toned solo horn playing by Richard Sebring. Stills from the film – featuring a smoldering Marlon Brando and a radiant Eva Marie Saint – reinforced the musicians’ highly evocative, appropriately moody playing. 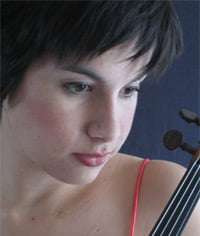 Following the Bernstein section, American violinist Danielle Belen Nesmith, the first-place Laureate of the 2008 Sphinx Competition, performed the final movement of Brahms’s Violin Concerto. Nesmith proved up to the formidable technical demands of Brahms’s writing, but the music sounded somewhat contrived owing to the almost total lack of rapport between her and the conductor.

The sights and sounds of the baseball park came to the second half of the program, a multimedia celebration of the 100th-anniversary of the composition of “Take Me Out to the Ball Game”, the iconic song that is as much a part of American culture as any piece of music can be. The show, organized and produced in collaboration with the Baseball Music Project, highlighted a century’s worth of music about the sport, and featured performances of songs ranging from “The Star-Spangled Banner” (traditionally sung before the start of every professional baseball game played in the U.S.) to “Let’s Keep the Dodgers in Brooklyn”, cited in an introduction by Keith Lockhart as “baseball’s first and only protest song.” 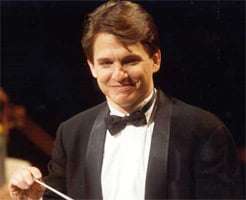 The program was great fun and highly informative about the music itself, as Lockhart provided introductory anecdotes about each piece. The playful account of The National Game, a 1925 march composed by Sousa at the invitation of the then U.S. Commissioner of Baseball to celebrate the 50th-anniversary of the founding of the sport’s National League, was particularly enjoyable. At appropriate points in the music, Lockhart adopted a hitter’s stance and swung a baseball bat at a suspended wood cylinder to produce the crack of the bat that substitutes for the crash of cymbals in Sousa’s rousing march.

Perky singer Misty Castleberry, wearing a bright red dress, began her part of the concert with an energetic rendition of “Slide, Kelly, Slide” and finished it wearing her own Red Sox jersey as she led an audience sing-along of “Take Me Out to the Ball Game”, while 1908-style lantern slides highlighted the words of the chorus – not that they were needed; the song is commonly claimed to be the third most-often sung in the States (after “Happy Birthday to You” and “The Star-Spangled Banner”). 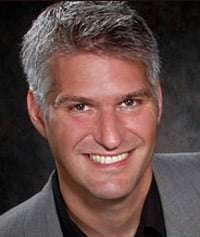 Forrest Mankowski added some welcome swing to the program, singing the lyrics and producing delightful, jazzy saxophone sounds in “Did You See Jackie Robinson Hit That Ball?”, a 1949 juke-box hit written and originally performed by Buddy Johnson and later re-recorded by Count Basie, whose version became standard. Mankowski and Castleberry kept the jazz beat going in their duet, “Joltin’ Joe DiMaggio.”

Jim Lonborg, a member of the Boston Red Sox Hall of Fame who enjoyed a 15-year career with the team and led it to the 1967 World Series, gave an appropriately dramatic narration of Ernest Thayer’s 1888 ballad-poem “Casey at the Bat”, but unfortunately his voice was sometimes overpowered by the music – instrumental riffs on the chorus of “Take Me Out to the Ball Game”.

The performance of the “Tribute to the Baseball Hall of Fame” (a selection of excerpts from the soundtracks for the films “Field of Dreams” by James Horner and “The Natural” by Randy Newman) was disappointing – not because of the music itself – frequently soft and tender, at other points highly dramatic – but for the way in which the accompanying visuals (images from the Baseball Hall of Fame in Cooperstown, NY, depicting great moments and people in the history of baseball) were presented. There were so many and they were so detailed, and they changed so rapidly that they distracted from Horner and Newman’s music.

The planners pulled out all the stops in the final number, The Stars and Stripes Forever, the National March of the U.S., and guest-conducted by Larry Lucchino, President and CEO of the Boston Red Sox. As star-shaped lighting patterns simulating fireworks flashed on, off and around Symphony all, images of the U.S. flag were projected, and the Pops-serving staff marched up and down the aisles waving flags.

This mixed-bag program had many enjoyable moments. The members of the audience seemed greatly moved by On the Waterfront, and they clearly enjoyed the baseball songs, enthusiastically joining in for the sing-along numbers, and wildly clapping at the conclusion of each song.