The Fabric of America: A Journey of Hope [a film produced by Scott Rettberg & Megan Sleeper]

Battle Hymn of the Republic

Affectionately known as “America’s Orchestra”, the Boston Pops marks its 125th-anniversary this season, and the centerpiece of the birthday celebration was this patriotically themed concert, part of a series entitled “American Heroes”. This evening’s program featured the world premiere of “The Dream Lives On: a Portrait of the Kennedy Brothers”, a fifteen-minute piece commissioned by the Pops and composed by Peter Boyer, along with an all-American array of classical works, folk-music and patriotic songs (including two singalongs).

The festivities opened with “The Fabric of America: A Journey of Hope,” a brief film accompanied by Keith Lockhart leading the Pops orchestra in an excerpt from the second movement of Dvořák’s ‘New World’ Symphony. The film served as a prelude to the unveiling of the National 9/11 Flag, the patchwork restoration of the remains of the 30-foot American flag recovered in debris after the collapse of the World Trade Center in New York City on September 11, 2001.

After an honor guard of New York and Boston firefighters present during the 9/11 rescue and recovery missions, greeted with warm appreciation by the audience, the Tanglewood Festival Chorus delivered an especially reverent rendition of “The Star-Spangled Banner”. This was followed by the Liberty Fanfare composed by John Williams (Pops Conductor Laureate who led the orchestra from 1980 to 1993) and brief passages from Copland’s Appalachian Spring. Vocalist Renese King brought her soulful voice to a moving, gospel-flavored rendition of “America the Beautiful”, with the sixty members of the Tanglewood Festival Chorus joining in near the end. 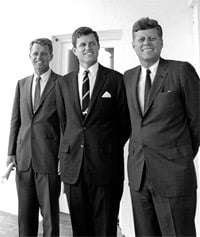 The unmistakable highlight of the evening was “The Dream Lives On”, Peter Boyer’s multi-media work, which combines inspiring quotations from speeches by John, Robert and Edward Kennedy with original text and video, all accompanied by a highly dramatic orchestral and choral score. Lyricist Lynn Ahrens selected the spoken extracts and created the poetic paragraphs that set the context of the piece within Boyer’s highly dramatic score. The title “The Dream Lives On” was taken from the closing lines of one of Senator Edward “Ted” Kennedy’s last public speeches: his address to the Democratic National Convention in 2008.

For this world premiere performance, actors Robert De Niro, Ed Harris and Morgan Freeman read the words of John, Robert and Edward Kennedy, respectively, and Cherry Jones delivered Ahrens’s poetic introductory and closing lines. The three actors who recited the words of the Kennedys succeeding in giving an impressive and heartfelt performance, speaking their lines simply and directly, and wisely avoiding any attempt to imitate the brothers’ distinctive accents. But it was Cherry Jones’s delivery of the work’s opening and closing lines that achieved the most deliberately dramatic effect.

In a pre-concert press conference, Peter Boyer said his goal in composing the piece was to highlight the words of the Kennedys. His highly evocative music certainly does this. The neo-Romantic score, with its wordless vocalizations by the chorus, intensified the emotional effect of the texts and served as a fitting tribute to the three Kennedy brothers, whose words of hope resonated among generations.

Following intermission Arlo Guthrie and Brian Stokes Mitchell each delivered warmly-received vocal performances, and the audience participated enthusiastically in two singalongs, one saluting those who have served in the different branches of the U.S. military. The evening ended, with a rousing performance of The Stars and Stripes Forever, which has regularly served as the grand finale to Pops concerts since 1900.