The evening opened with an amiable and vivid performance of French-American composer Betsy Jolas’s new orchestral work, Letters from Bachville. A co-commission of the BSO and the Leipzig Gewandhaus Orchestra, the piece is receiving its first American performances this week in Symphony Hall as part of the two ensembles’ musical partnership led by Andris Nelsons. 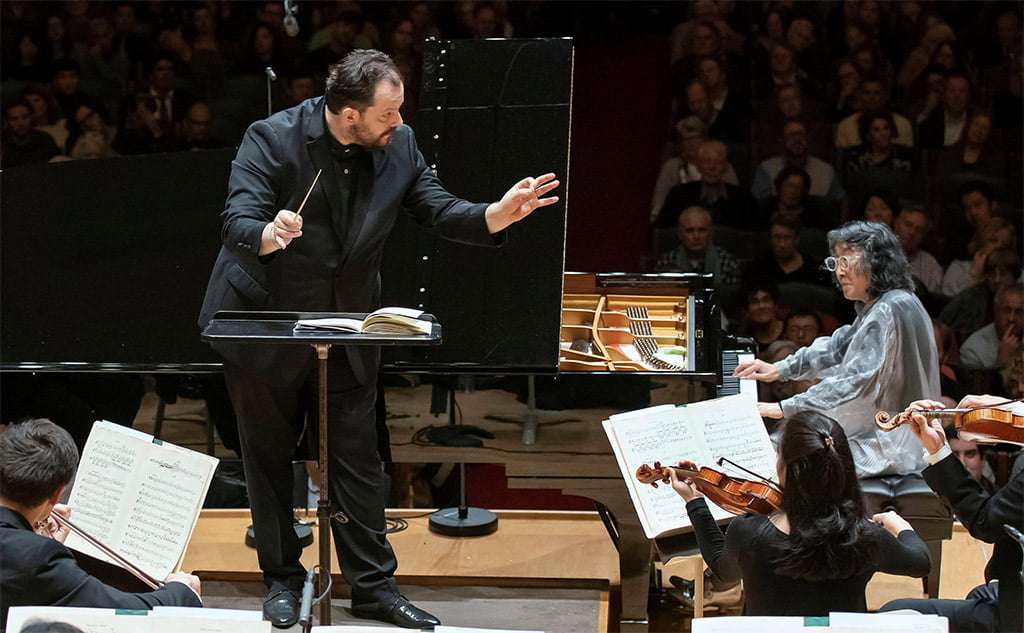 Bachville is Leipzig, the city where Johann Sebastian Bach composed many of his masterpieces, but a place to which Jolas had never traveled until the work’s world premiere there in September 2019. In response to the co-commission, the composer has conjured an evocative musical collage from her own Bach-centered musings on the city. The allusions to the great Cantor are not always easily recognizable in the percussion-rich, fourteen-minute piece. For the most part, they are oblique and highly fragmentary, but the music remains subtle, playful and – as delivered by Andris Nelsons and the BSO forces – highly enjoyable.

Next the orchestra was joined by Dame Mitsuko Uchida for a ravishing account of Maurice Ravel’s glittering Piano Concerto in G. The bright and bustling first and third movements were appropriately brisk and spirited, but it was the heartrending Adagio that most impressed. For long stretches of the movement, Uchida was performing alone and her passionate but tender playing of Ravel’s delicate, understated music absolutely transfixed the audience. Nelsons and the BSO musicians provided glorious support throughout, the flute, oboe and clarinet principals especially.

The program concluded with Dmitri Shostakovich’s Twelfth Symphony, taken on as part of Nelsons and the orchestra’s on-going survey of the composer’s fifteen symphonies. This month’s performances are the BSO’s first complete accounts of the 40-minute work. Notably, Bruce Hangen led the orchestra in an account of the third movement, ‘Aurora,’ during a week of Youth Concerts marking the composer’s centenary in November 2006.

Composed in 1961, the symphony was originally planned as a tribute to Vladimir Ilyich Lenin, the leader of the Bolshevik Revolution that overthrew Russia’s provisional government and resulted in the establishment of the communist USSR. But the composer’s ambivalent attitude toward Lenin eventually got in the way, and in the end he avoided using Lenin’s name in the title, renaming the work The Year 1917.

Perhaps the most traditional of Shostakovich’s output in the symphonic genre, the piece is neither among his finest, nor among his most profound. Much more in the spirit of classical Russian symphonic music than his other, more innovative symphonies, it offers an array of visceral thrills – an imposing and frequently reiterated theme; deafening, percussion-filled climaxes; a flaming finale; and, a general sense of excitement – but comparatively little depth or genuine feeling.

Each of the work’s four movements is named for an episode in the six-month 1917 Revolution. The most satisfying is the Adagio ‘Razliv,’ a slow and quiet depiction of Lenin exiled in rural Finland, plotting his next move after a failed attempt at a coup. An impressively executed string of haunting solo melodies, perfectly executed by the woodwind principals, led directly into the scherzo ‘Aurora’ (the movements are played without pause) with its gun-blazing climax.

The BSO musicians played with great confidence, gradually pumping up the power to deliver a forthright performance of a somewhat overblown piece that contrasted sharply with subtler works on the earlier half of the program.