Wagner
Rienzi – Overture
Lutosławski
Concerto for Piano and Orchestra
Shostakovich
Symphony No.15 in A, Op.141 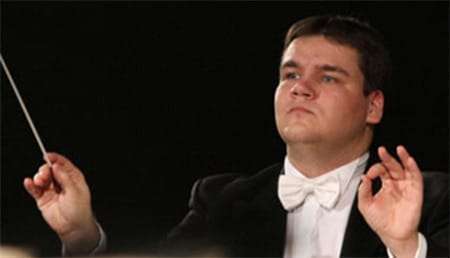 This concert offered Bostonians a program dominated by relative rarities: the Overture to Wagner’s Rienzi, Lutosławski’s Piano Concerto and Shostakovich’s Symphony No.15. 2013 brought the centenary of Witold Lutosławski’s birth and for this concert, on what would have been the eminent Polish composer’s 101st birthday, BSO Assistant Conductor Andris Poga – leading his first full program since the start of his appointment from the 2012-2013 season – was joined by Garrick Ohlsson. The orchestra’s only previous performances of the Lutosławski were in 1990 as part of a concert conducted by the composer.

The evening opened with a rousing rendition of the Wagner, the opera itself composed partly in Poga’s hometown of Riga (Latvia) and premiered in Dresden in 1842. More formally titled Rienzi, der Letzte der Tribunen (Rienzi, the Last of the Tribunes), it was the composer’s first commercial success and was written in the style as developed by Meyerbeer and librettist Scribe: five grandiose Acts, historical setting, elaborate decor and effects, huge cast and chorus. While few know the opera beyond its Overture, Boston’s newly-launched Odyssey Opera gave a concert version of it in the New England Conservatory’s Jordan Hall last September. The Overture was first performed by the BSO in 1882 and remained a staple of its repertoire well into the 1920s and 1930s, since which time it has figured only infrequently in Symphony Hall programming. There was much to appreciate in this bracing performance. Poga, recently named music director of the Latvian National Symphony Orchestra, displayed a perfectly lucid technique, with well-timed and confidently placed gestures, and an abundance of momentum in the build-ups. Both he and the BSO seemed to have great fun playing the piece, which offered a reminder of some of the orchestra’s strengths: a lush tone in the strings, perfectly polished and unified brass, and a marvelously seasoned timbre in the woodwinds. 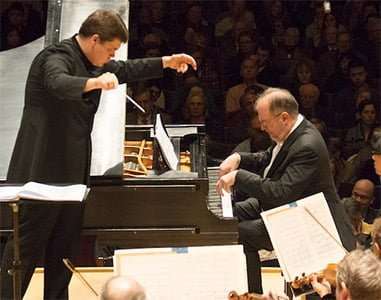 Lutosławski’s Piano Concerto, a rhapsodic work written for Krystian Zimerman, was an effective vehicle for the virtuosity of Ohlsson. Under his hands and the leadership of Poga, the twenty-five minute work, consisting of four movements played without pause, sounded graciously affable, above all in the passages where the more intimate music of the piano contrasted to the showier music of the orchestra. The piece, which fuses the composer’s more advanced musical language with reminders of Rachmaninov and Chopin, sounded fresh, original and intensely challenging. Ohlsson’s performance was compelling, elegant and imaginative, with Poga and the BSO players as his assured partners in this vigorous account.

Shostakovich’s completely characteristic Fifteenth – and final – Symphony closed the evening. Written in 1971, this striking piece, with its lively and droll first movement, somber second, colorful scherzo and wonderfully lyrical finale is haunted by the ghosts of nineteenth-century opera. Quotations are prominent in the score. The famous gallop from Rossini’s William Tell Overture is impossible to miss as it stalks edgily through the first movement. The Wagner quotations (the ‘fate’ motif from the Ring cycle at the start of the fourth movement, followed closely by an allusion to ‘Siegfried’s Funeral March’ and the first three notes of the Prelude to Tristan and Isolde) are only slightly less obvious. Poga did justice to the kaleidoscopic work with a precise, well-balanced reading, offering the musical allusions at face value and allowing the ambiguities of the music to remain, without any artificial attempts to emphasize the ever-present drama. The BSO’s playing was excellent, with the contributions of assistant concertmaster Elita Kang and principal cello Jules Eskin deserving mention.