This Boston Symphony Orchestra concert’s coupling of Grieg’s Piano Concerto with Mahler’s Fourth Symphony may be justified primarily by their enduring popularity. The seemingly endless procession of beautiful melodies in the Grieg Concerto is certainly comparable to the light-hearted lyricism that pervades much of the Mahler symphony. Both composers are well known for their distinctive use of folk tunes. Grieg embellishes his Concerto with bold strokes that vitalize the stream of melodies he offers, while Mahler, in a lighter mood than in his earlier symphonies, is both playful and heartwarming. 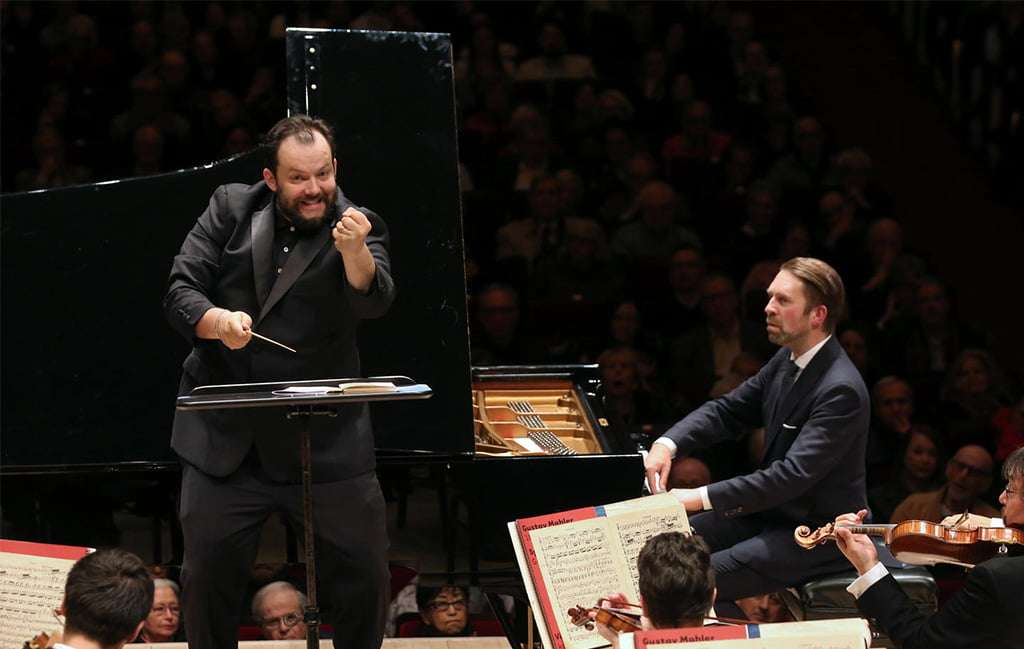 Leif Ove Andsnes combines elegance with assertiveness, and a masterful technique with intelligent interpretative insight. His reading was essentially straightforward, imbued with vitality, refined expressivity and dramatic power. In the first movement, a sense of yearning permeated the lyrical second theme, and the dramatic buildup to the reprise of the main idea toward the close was forceful and dynamic. A slight tinge of melancholy invaded the otherwise serene calm of the slow movement. The principal subject of the finale was spirited but not overwrought, while a mystical atmosphere hovered over the second subject, evoked by an ethereal flute passage over shimmering strings. Andsnes shaped lyrical phrases brilliantly. Overall, his approach was simple, direct and artful, evoking the full measure of Grieg’s masterpiece without succumbing to excess or overdramatizing the music. For an encore, Andsnes offered Grieg’s Norwegian March (Lyric Piece, Op. 54/2), emphatic treatment of accents characterizing his thoroughly idiomatic playing.

Andris Nelsons set a lively pace for the first movement of Mahler’s Fourth Symphony, undermining the warm, Viennese Gemütlichkeit that should pervade much of the melodic material. Only at the close of the exposition, when the music becomes serenely calm, did a feeling of repose provide some relief from the otherwise agitated character. A rather icy glaze saturated this movement and the next, thereby disaffecting their charm and delicacy. They were, for the most part, anything but relaxed (gemächlich, the key word in Mahler’s main tempo marking for both movements), but did benefit from Nelsons’s detailed reading, as he urged inner voices to come through noticeably but in proper balance.

The slow movement was another matter. Here Nelsons established an easygoing pace that enabled the tender, dreamy character of the main theme to come through. He let the music breathe without stretching the tempo unduly. Subtle rubato gave the melodic line both shape and character. What emerged was a deeply felt expressivity, beautifully wrought and brilliantly conceived. In the more impassioned passages, Nelsons let the music develop naturally. He deftly handled the segment in which the tempo increases with each musical idea, beginning with an unhurried andante and gradually working its way to a sprightly allegro molto that ends abruptly as if crashing into a wall. Ethereal violins engendered a feeling of perfect serenity with luminous chords in their highest register. Arching phrases were shaped splendidly, easing up ever so slightly at their highpoint. The outburst of E major that breaks through the calm and heralds a section often referred to as the kleine Appell (a reference to the grosse Appell segment of the Second Symphony’s finale) was introduced by a rather long ritardando on the dotted-rhythm upbeat that undercut the shock value of that sudden orchestral explosion. In this passage Mahler anticipates the theme of the finale. Resounding horns were glorious here. As the dynamic level softened, a heavenly atmosphere emerged, bringing the movement to a hushed close.

The highlight of the finale was the superb singing of soprano Genia Kühmeier, who brings to Mahler’s Fourth just the right voice – an angelic vocal quality expressed with youthful wonderment as she describes the homespun goings-on in Heaven from a child’s perspective. Mahler directs the soloist to sing “with child-like and serene expression, always without parody!” He also asks that she sing softly (p or pp) for virtually the entire movement, except in the more forceful penultimate verse about the fruits, vegetables and animals that abound in the heavenly garden. All too often, sopranos engaged to perform this song-movement are either too vocally robust or ignore Mahler’s markings by singing the entire movement at full voice. Kühmeier is to be complemented for maintaining Mahler’s dynamics throughout and imbuing her vocalism with just the right demeanor to deliver this song as it should be sung, as Nelsons kept the orchestra appropriately at bay. The BSO was generally in fine fettle throughout the concert, strings radiant, brass resounding and woodwinds bright and shining.