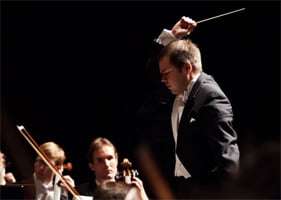 Two days before this concert the Boston Symphony Orchestra announced that James Levine was stepping down from his post as Music Director and withdrawing from his appearances for the remainder of this season due to ongoing medical problems. For this challenging program, which included the BSO’s only world premiere this season, the young (31) Brazilian Marcelo Lehninger, one of the orchestra’s two assistant conductors for the 2010-2011 season, was tapped to replace Levine. Lehninger, who made an impressive Symphony Hall debut last October leading the orchestra in music by Barber, Beethoven and Tchaikovsky with Pinchas Zukerman as soloist, carried off this ambitious concert with energy, confidence and grace.

The world premiere of Harrison Birtwistle’s Violin Concerto is perhaps the most important performance of this BSO season. Unfortunately, Symphony Hall was only half-full. But the few and relatively young concertgoers who made the trip had the pleasure of hearing Christian Tetzlaff in broad-ranging works that displayed his extraordinary artistry and versatility. From the first note he played it was apparent that Tetzlaff, whose relationship with the BSO goes back twenty years, was in particularly great form. The evening opened with Mozart’s delightful Rondo in C. Tetzlaff, a superb Mozartean, delivered this tasty starter with freshness and elegance. 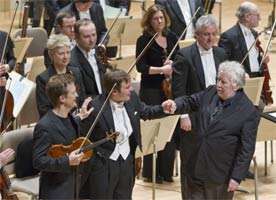 Birtwistle’s Violin Concerto, commissioned by the BSO at James Levine’s request, is the composer’s first such work for a stringed instrument. About 25 minutes in length it is a densely-packed, highly dramatic, satisfying piece. Robert Kirzinger points out the concerto’s indebtedness to classical Greek drama, with “the violin soloist as protagonist and the orchestra as chorus.” The solo violin plays almost without pause throughout this brilliant and arresting piece. Cast in a single movement, it is mostly fast and very demanding for the soloist. The orchestral members functioning sometimes as a composite voice and at other times with individual instruments engaging in animated conversation with the solo violin. Five instruments engage in prominent duets. First is a flute, followed by piccolo, cello, oboe and bassoon. Birtwistle has accurately described these duets as “a way of focusing the dialogue” and the drama of the piece lies in the constant to and fro as the primary voice of the violin interacts with the other instruments’ idiosyncratic or uniform opinions. The orchestra’s presence lessens over the course of the piece until it ends in hushed expectancy. Christian Tetzlaff’s highly athletic and totally committed playing was a wonder; and Lehninger’s clear, expressive conducting drew a spirited response from the BSO.

Tetzlaff’s playing was also dazzling in Bartók’s Second Violin Concerto. Bartok’s score covers an enormous range of moods and language, and Tetzlaff perfectly balanced the work’s lyricism along with the more forceful, vigorous sounds that occasionally interfere. His reading was completely focused, confident and highly personalized. In the opening he displayed a gritty intensiveness, gradually expanding his range of color and sonority to conjure a gorgeously glowing tone in the slow movement, and in the finale he produced a rich and lithesome sound that was bright enough to cut through Bartók’s forceful orchestration.