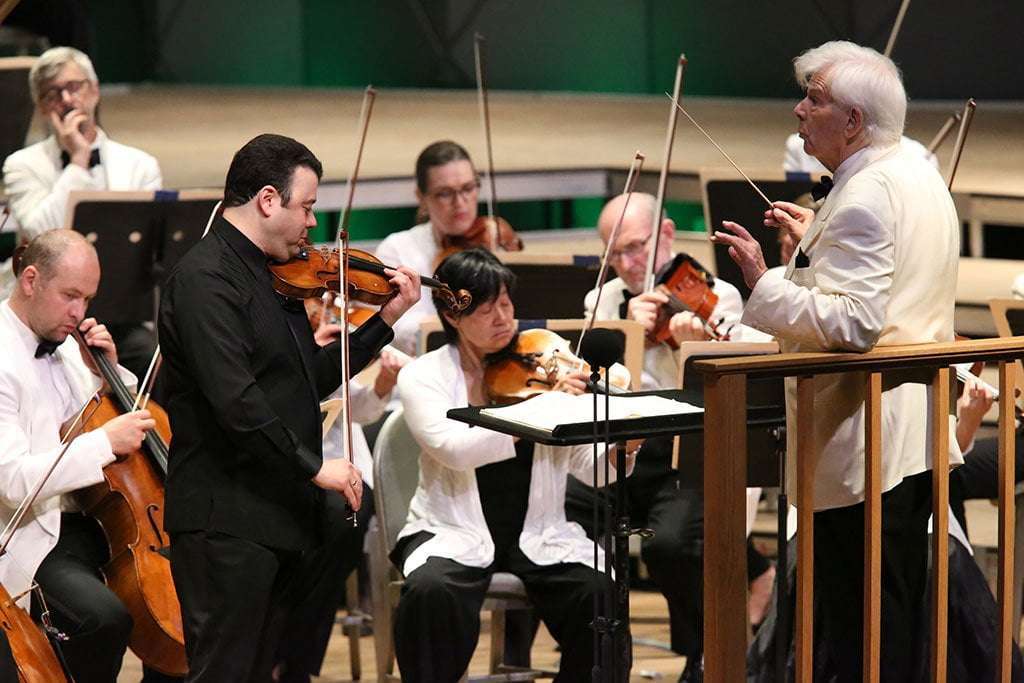 This Beethoven pairing made for a most enjoyable concert in the beautiful environment of the Boston Symphony Orchestra’s summer home at Tanglewood. Christoph von Dohnányi drew excellent playing and Russian-born Israeli violinist Vadim Gluzman was making his BSO debut.

These two consecutively opus-numbered works were composed in the latter half of 1806, the same year as the three ‘Razumovsky’ String Quartets and the Fourth Piano Concerto. The Fifth Symphony was also then in process. Each of these contemporaneous works is quite different from the others, so the two pieces performed here offered only a very limited glimpse of the remarkably multidimensional progress of Beethoven’s development as a composer.

Dohnányi’s experienced hand with Beethoven showed in every aspect of this energetic performance of the B-flat Symphony, from ensemble size and seating (antiphonal violins; double basses and cellos to his left) to his of adoption of tempos that generally respected the composer’s markings and resisted any temptation to rush the music unduly. He built suspense in the mysterious harmonic meanderings of the introductory Adagio, emphasizing the contrast between its dark brooding and the ensuing sunny Allegro. In the Adagio second movement, the antiphonal positioning of the second violins brought their persistent accompaniment alongside the solo clarinet into proper balance with the cantabile melodies. The rollicking Scherzo contrasted nicely with its twice-repeated Trio, the horns’ outburst cutting short the last component of the ABABA structure, making way for the finale, which Dohnányi took quite rapidly – but without totally disregarding the ma non troppo qualification of the Allegro marking. The run to the finish was exhilarating.

The BSO played marvelously and sounded wonderful in the Koussevitzky Shed. Timothy Genis’s timpani, ranging from thunderclaps to soft murmurs, stood out as a vital source of punctuation. Horns and trumpets provided accents and highlights without overpowering the impressively agile strings. The woodwind section was outstanding, with principal bassoonist Richard Svoboda especially noteworthy for his elegant playing right through to his note-perfect rendition of the (in)famous rapid-fire solo in the finale.

In the Violin Concerto Dohnányi guided the BSO through majestic statements of the opening movement’s themes, and Gluzman seemed increasingly drawn into the music, smiling broadly during lyrical passages. He gave a full-throated, romantic rendition, generating a powerful and beautiful tone from his 1690 “ex-Leopold Auer” Stradivarius. Dohnányi was a fastidious partner, maintaining balances that allowed the solo instrument’s lines to shine through. Gluzman showed off impressive virtuosity in a cadenza by Nathan Milstein, adding a somewhat more ‘modern’ touch than those by Joachim and Kreisler.

The Larghetto was gorgeous, muted violins swelling and subsiding before Gluzman’s entrance, and fine solos by Svoboda and clarinetist William R. Hudgins accompanying the violinist’s sublime singing. The transition to the finale was well-managed, and the ensuing interplay between soloist and orchestra was delightful and humorous.