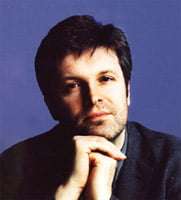 James MacMillan’s “St John Passion” was co-commissioned by the London Symphony Orchestra, the Boston Symphony Orchestra, the Royal Concertgebouw Orchestra and Rundfunkchor Berlin. When the LSO offered Sir Colin Davis the opportunity of a commission to celebrate his 80th-birthday (25 October 2007), he requested a work from MacMillan. Davis led the LSO in the world premiere (recorded for LSO Live) in April 2008. Since then the work has been performed in the Netherlands and Germany. Later this spring MacMillan himself will conduct the Scandinavian premiere in Copenhagen, and Sir Colin will return it to London and introduce the work to Amsterdam.

While the LSO and Davis have been proponents of MacMillan’s music for more than a decade (The World’s Ransoming was commissioned and premiered by the orchestra in 1996, also on LSO Live), the BSO has had little exposure to the composer. Prior to this performance the orchestra had performed only one of MacMillan’s works: his percussion concerto, Veni, veni, Emmanuel, in 1996, conducted by Seiji Ozawa and featuring Evelyn Glennie.

MacMillan’s builds on the model in Bach’s musical settings of the Passions. It is a large-scale, dramatic rendering of the Gospel of St John, from the arrest and condemnation through to the crucifixion of Jesus Christ. The story is told in ten movements. Most of the text is in English, but MacMillan ends each of the first nine sections with a liturgical text in Latin, which serves as a kind of commentary on the preceding St John narrative. The final movement is purely instrumental.

MacMillan’s setting differs from Bach’s model in that there is only one soloist: a baritone who sings the role of Christ. The words of the crowd and the other main characters in the drama (Simon Peter, Pontius Pilate and so forth) are sung by a large chorus. The scoring also calls for a chamber choir or “narrator” chorus which sings the Gospel passages. The choruses each have a distinct musical style. The music for the large chorus (sung by 100 members of the Tanglewood Festival Chorus) is very powerful and theatrical, expressing an extremely wide range of emotion. The more intimate writing for the chamber choir (16 members strong) is heavily influenced by plainchant. The solo baritone part, written specifically for Christopher Maltman, is very florid and intricate, requiring superb agility and pitch control. The score calls for a standard large orchestra, and the highly detailed, virtuosic instrumental writing is marked by moments of startling intensity.

Davis led an outstanding performance of MacMillan’s complex, highly theatrical score. Every section of the orchestra played its party superbly. The Tanglewood Festival Choristers sang with splendid diction and obvious relish, displaying an extraordinary range of sound. As Christ, Christopher Maltman delivered a magnificent performance of a highly demanding role. He and the choral singers were at their most impressive and intense in ‘The Reproaches’, the piece’s most ‘operatic’ section, in which Christ, hanging from the Cross, strongly rebukes his people for allowing his human sufferings.