This all-French program offered a wide array of expressions and styles, including the American premiere of a brand-new song cycle by Henri Dutilleux, and some songs (originally scored for piano) by Henri Duparc, alongside more familiar works by Berlioz and Debussy.

The concert opened with three orchestral excerpts from Berlioz’s “Roméo et Juliette” (a ‘Dramatic Symphony’) with Levine and the Boston players at their finest. As noted in a program note by the maestro, when heard as excerpts, these instrumental movements seem more like tone poems or tone-paintings than a multi-movement symphonic work. In a reading full of color and depth, Levine succeeded in bringing out all the atmospheric brilliance of Berlioz’s vivid orchestration. ‘Romeo Alone – Festivities at the Capulets’ bristled with vitality, the great ‘Love Scene’ was developed with satisfying warmth, and the ‘Queen Mab Scherzo’ was full of vigorous ensemble playing.

Henri Dutilleux’s “Le Temps l’Horloge” (translated as ‘Time and the Clock’), written for Renée Fleming, was jointly commissioned by the Saito Kinen Festival Matsumoto, Orchestre National de France, and the Boston Symphony as one of its 125th-anniversary commissions. The 91-year-old composer has a long history with the BSO, stretching back to the 1950s when Charles Munch conducted his First Symphony. Previous BSO commissions include his Second Symphony (Le Double), premiered in 1959 and revived by Levine in 2005, and “The Shadows of Time”, premiered by Seiji Ozawa in 1997.

“Le Temps l’Horloge” is a short song-cycle, lasting about 9 minutes, but it is a significant addition to Dutilleux’s relatively small oeuvre. There are currently three songs in the composition, and the work has not yet reached its final version. Dutilleux plans to add a fourth setting, based on a prose-poem, “Enivrez-Vous” (Get Drunk!), by Baudelaire. 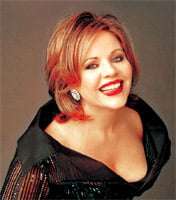 The texts in the existing cycle are linked by the idea of “space-time”. The first lyric, ‘Le Temps l’Horloge’ by Jean Tardieu, explores two kinds of time, one that is measured by the clock, and one that passes “among us noiselessly / Like a thief in the night”. The second, ‘Le Masque’, also by Tardieu, describes a mysterious encounter with a bronze mask which “has remained silent for ten thousand years”. The final lyric, ‘Le Dernier Poème’ by Robert Desnos, is a deeply moving expression of longing for an absent lover.

Renée Fleming gave a totally committed and persuasive account of Dutilleux’s sensual, elegantly sculpted composition. She delivered all three songs with exemplary nuance and her signature beauty of tone, bringing out all the colors in the evocative score. Levine and the orchestra were similarly responsive to the range of textures in the brilliantly orchestrated score, in which an accordion and harpsichord play prominent roles.

Fleming was equally at home in the four Duparc songs. She loves these songs and it showed in her sensuous performance. The BSO musicians superbly captured the evocative orchestral hues that support the texts, providing a marvelously evanescent accompaniment in “L’invitation au voyage” in which the contributions of Ann Hobson Pilot’s harp and Elizabeth Rowe’s flute were particularly pleasing.

The program concluded with a warmly atmospheric account of La mer. Levine’s succeeded in conveying Debussy’s images with vivid and subtle elegance, in a performance full of rich and glowing orchestral detail.