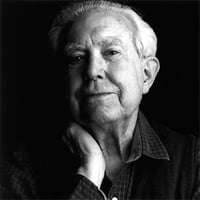 Elliott Carter enjoys strong relationships with both the Boston Symphony Orchestra and with James Levine. Under Ingo Metzmacher the orchestra gave the world premiere of Carter’s Boston Concerto, and Levine introduced Symphonia: Sum fluxae pretium spei to the BSO repertoire. Levine led the 2005 world premiere of Carter’s Three Illusions, and at Tanglewood in 2006 he conducted the American stage premiere of his only opera, “What Next?”.

For the summer of 2008 Levine has scheduled a five-day Carter Centenary Festival at Tanglewood featuring dozens of performances of Carter’s work. Carter, who will turn 99 on 11 December 2007, shows no signs of cutting off his compositional flow. In addition to Three Madrigales for six solo voices, and Sound Fields for strings, he has already completed Interventions, a work for piano and orchestra that the BSO will perform next season to celebrate his 100th-birthday.

In this concert, Levine led Carter’s Horn Concerto, a work commissioned by the BSO principal James Sommerville and receiving its world premiere in this week’s performances. The 15-minute work consists of seven episodes of strongly contrasting character played without pause.

Each episode features a unique orchestral timbre and features distinctive horn material. In the opening Allegro the full orchestra covers a wide melodic range, with the solo horn emerging from a massive fortissimo chord. In the second, more lyrical section, the horn plays against a shifting background of brass. In the succeeding Scherzando section, unpitched percussion accompanies the horn as it runs through a wide range of tones. In the fourth episode incisive, surging orchestral chords accompany an energetic horn part. In the Largo section, which features lyrical music once again, delicate strings accompany the horn. In the strongly contrasting Presto section, the horn runs through a series of rapidly repeated pitches with light orchestral accompaniment. In the final episode, the music turns lyrical once more and builds until it echoes the horn’s first appearance at the beginning of the piece.

Sommerville had no trouble navigating this taxing and rapidly shifting musical terrain with its flowing lines, sudden leaps and fast passagework. He played the exposed horn line with assurance, power and – whenever required – marvelous poetic grace. The sold-out audience listened attentively and gave the composer a standing ovation.

The concert had opened with a superbly polished reading of the Haydn Symphony. There was wit from the woodwinds, and the string phrasing was especially pleasing. The slow movement was warm and gracefully shaped. The Minuet was a bit on the slow slide, but rhythmically lifted. Details were sculpted with loving care, and the orchestral playing was stylish throughout.

The evening ended with a magnificent performance of Mahler’s First Symphony in which Levine brought out the youthful vitality of Mahler’s inspiration and all the virtuoso qualities of the BSO players. There was uncommonly fervent string playing, and a wonderfully atmospheric response from the horns. The poignant introduction of the ‘Frère Jacques’ theme to the third movement was especially memorable, as was the jubilant brilliance of the finale.