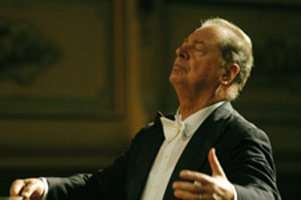 A frequent guest conductor of the BSO in Boston and at Tanglewood, Rafael Frühbeck de Burgos returned to the Symphony Hall podium this week. For the first of his two programs during his current visit, he took on another tone poem by Strauss: Symphonia domestica. In his BSO programs last season he conducted three: Don Juan, Till Eulenspiegels lustige Streiche and Eine Alpensinfonie. This week’s program paired Strauss with Brahms’s Violin Concerto and featured Leonidas Kavakos as soloist. The violinist’s only previous appearance with the BSO was in March of 2007, when he gave Bartók’s Second Violin Concerto.

Kavakos, playing the Giovanni Battista Guadagnini of 1782, delivered an eloquent, strongly focused reading of the Brahms, full of controlled feeling and disciplined vigor. Without resorting to gratuitous displays of showiness, Kavakos mustered all the power and technical skill needed to command total attention in the concerto’s grander moments. Joachim’s first-movement cadenza was spellbindingly beautiful, and the warm lyricism of the Adagio was especially memorable. The finale, strongly reminiscent of Brahms’s Hungarian Dances, was appropriately spirited and appealing.

Frühbeck drew comparably powerful playing from the orchestra, providing an appropriately strong accompaniment to Kavakos’s commanding performance. The BSO winds were finely toned in their long passage at the beginning of the Adagio with principal oboe John Ferrillo providing a particularly affecting contribution.

After intermission came Strauss’s Symphonia domestica, a genial portrait of a day in the family life of the composer, his wife Pauline and Franz, their adored five-year-old son. The score calls for a massive orchestra – 108 pieces – and is lavishly melodic, inherently sensuous, and dramatic in a way that does not preclude appreciation on a purely abstract level. Composed in one continuous movement, the four parts correspond roughly to traditional sonata form.

Frühbeck led a rather tempered and often enjoyable account, with the BSO strings responding with warm virtuosity and Concertmaster Malcolm Lowe’s gently melodic violin solos sounding superb. Frühbeck was most in his element when the music was slow and ruminative. His conducting was less effective in the more rhythmically complex passages when the playing sometimes came across as less than ideally taut or crisp in ensemble. In the work’s more overtly spectacular sections, the brass and percussion produced a hefty and appealing sound, but overall this was a relatively low-powered performance of Strauss’s richly varied score.