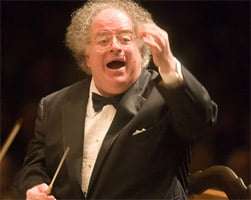 Levine began the concert with three orchestral excerpts from Berlioz’s “Roméo et Juliette”. In ‘Romeo Alone – Festivities at the Capulets’, Levine painstakingly controlled the gradual increase in dynamic intensity of the strings as they accompanied the solo oboe in portraying the pensive hero, then gave a spirited rendition of the dancing at the Capulets, where the lovers first meet. Although the full work includes a double chorus and solo voices for subsidiary characters in the Shakespeare drama, Berlioz scored the ‘Love Scene’ for orchestra only, observing that this work is “a symphony, not an opera”. Here the cello section was in fine form, the violas prominent in counterpoint and the horns playing a rocking figure. In ‘Queen Mab Scherzo’, agitated figures in the winds and string pizzicatos deftly captured this dream sequence’s images of frolicking fairies in the opening Prestissimo section. The orchestra was marvellous in the Allegretto interlude, with the violins playing trills and harmonics in three-part harmony accompanying a haunting duet for cor anglais and flute, rapid figures on the violas, and harmonics on two harps as the divided cello section played pppp pizzicatos. The four horns then took center-stage, playing solos, in pairs and in quartet, before the movement resumed its headlong rush toward its close, with the chiming of antique cymbals along the way adding to the festive air. 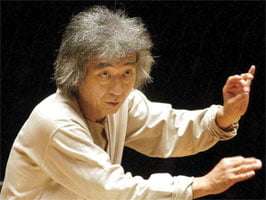 Dutilleux’s “Le Temps l’Horloge” was written expressly for Renée Fleming, who performed in its premiere at the Saito Kinen Festival in Matsumoto, Japan this September with Seiji Ozawa conducting, as well as in its U.S. premiere in Boston a few days prior to this concert. The work comprises three settings, two poems by Jean Tardieu and one by Robert Desnos. Fleming sang Dutilleux’s chromatic yet tuneful settings elegantly, her tone lovely across the considerable range of the work’s vocal line. The colourful orchestrations were appropriate to the texts without overshadowing the vocalist. The first song, ‘Le Temps l’Horloge’ (Time and the Clock) is short and fairly simple, reflecting the straightforward vocabulary of the poem. The second, ‘Le Masque’ (The Mask), is longer and more exotic, as Fleming sang of a mysterious ancient object in the form of a mask rising from the desert. Many vocal and orchestral touches coloured the text, sometimes contrasting with the words – for example, vocal ornamentation emphasising “se tait” (was silent) – sometimes echoing them, as when a clarinet mimicked the singing of “sourire” (to smile), and sometimes corresponding to the text, as in a virtually spoken passage containing “je parle” (I speak). The third song, ‘Le Dernier Poème’ (The Last Poem), is darker and more contemplative and featured accordion solos at the beginning and end, finally fading away with a sustained diminuendo on the strings. The 91-year-old Dutilleux, who plans to enlarge this cycle with a fourth song, to be set to Charles Baudelaire’s prose-poem “Enivrez-Vous” (Get Drunk!), was present and received a prolonged ovation.

In the four Duparc songs that followed the interval, Fleming was again in good voice that carried well above the orchestra, and seemed quite at home in this familiar repertory. Unfortunately, the added heft and colour that the orchestral versions of these songs provide cannot compensate for the diminished prominence of the vocal line when compared the original piano-accompanied versions. In ‘L’invitation au voyage’ (Invitation to Journey), Fleming’s voice was as lush as the song’s closing line: “Luxe, calme et volupté” (Luxury, calm and delight), and ‘Extase’ (Rapture), orchestrated by Arthur Luck, after an opening horn solo, was rendered with dreamy tenderness. In the impassioned ‘Le manoir de Rosemonde’ (The Manor of Rosemonde), the orchestra provided a ‘riding’ effect at the start and following the song’s cryptic last line. The set ended with ‘Phidylé’, in which Fleming was somewhat overshadowed by Duparc’s exquisite orchestration, which included a lyrical cello solo and a lovely tutti at the end of the poem’s last stanza.

The concert ended with Debussy’s La mer. Levine’s spirited conducting brought out the work’s colors in shimmering, and at times sparkling, detail. Of particular note were the trumpets (and, in the third movement, cornets à piston), which added a majestic tone throughout the work. As engaging as this performance was, it struck me as less evocative of the sea than any other performance I can recall – but I am uncertain whether that is cause for praise, criticism, or indifference.