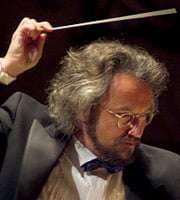 For this run of subscription concerts, Carlos Kalmar, Music Director of the Oregon Symphony Orchestra, stepped-in at very short notice to replace Boston Symphony Orchestra Music Director James Levine who was forced to withdraw from his final three weeks of the current season due to ongoing back problems. Kalmar took on a lengthy and challenging assignment for his BSO debut, leading a program which paired Mahler’s expansive Seventh Symphony with the world premiere of a new work by John Harbison.

The new Double Concerto is Harbison’s second work in this genre. His first, the Double Concerto for Oboe and Clarinet (1985), pitted the two soloists against each other and against the orchestra, in what he describes as “a contentious, dramatic struggle”. In his program note about the new work, Harbison goes on to say, “It was important to do something very different this time – to work with musical questions that don’t come up in that more traditional, public, concerto mode.” In place of a more argumentative musical dialogue, the new work emphasizes music-making of a more collaborative sort. In the first movement, marked Affettuoso poco inquieto, the soloists start out by expressing what Harbison calls “misunderstandings” in their musical opinions; in the second, Notturno: Adagio, the violin and the cello move toward more-mutual understanding by mirroring each other’s musical phrases; and in the finale, after striving to follow the orchestra’s example of playing in unison, they eventually achieve a refined musical compromise. 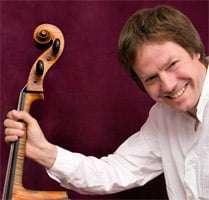 The Boston connections to this piece are strong. It was commissioned by the Friends of Dresden Music Foundation with violinist Mira Wang and cellist Jan Vogler (who is Wang’s husband) in mind and is dedicated to Wang’s mentor, Roman Totenberg, the Polish-born virtuoso violinist and educator. Totenberg, who will celebrate his 100th-birthday next January 1, is a longtime resident of the Boston area, where he has been an influential musical presence since 1961, when he became Chair of the String Studies Department of Boston University.

Harbison, who also lives in the Boston area, has enjoyed a long relationship with the BSO. It started in 1977 with the premiere of his Diotima and includes his First Symphony, Requiem, the overture Darkbloom, and most recently, his Fifth Symphony, which the orchestra premiered in April of 2008. The BSO also co-commissioned two of Harbison’s concertos: the Cello Concerto (1994) and the Concerto for Bass Viol (2007).

Playing their parts with poise, assurance and great commitment, Wang and Vogler gave a fine performance of Harbison’s genial music. Displaying a wonderfully warm tone, they gave the piece an appealing and appropriate sense of intimacy. Wang and Vogler were well supported by the BSO musicians under Kalmar, who revealed a good ear for the delicate nuances of Harbison’s appealing score. Following the performance, both Harbison and the 99-year-old Totenberg came enjoyed the audience’s hearty display of appreciation.

The performance of Mahler’s Seventh – an enormous and eclectic work which contrasts sharply with Harbison’s more concentrated and intimate writing – was less satisfying. Kalmar drew some excellent playing from the woodwinds and brass, but on the whole his account seemed overly lacking in tension, thrust and conviction, especially in the loosely-structured finale.