On 11 December 2008 Elliott Carter will celebrate his 100th-birthday. With James Levine as Music Director of the Boston Symphony Orchestra, it’s no surprise that the orchestra is celebrating this milestone occasion in grand style: Levine is one of Carter’s most avid fans. Last summer’s week-long Festival of Contemporary Music at Tanglewood, the BSO’s summer home, was devoted entirely to Carter’s music, and Levine led the orchestra in the world premieres of Carter’s Three Illusions in 2005 and Horn Concerto in 2007. Prior to Levine’s tenure, the orchestra presented two other debuts of Carter works – the Piano Concerto (with Jacob Lateiner as soloist) under Erich Leinsdorf in 1967, and Boston Concerto led by Ingo Metzmacher in 2003.

This season Levine and the BSO are marking Carter’s centenary birthday over several concerts including two works commissioned by the orchestra, in back-to-back programs which began with this one and culminate with a performance at Carnegie Hall on December 11. This first BSO program (to be repeated in the Carnegie Hall concert) featured the world premiere of Carter’s Interventions for piano and orchestra. The second program (scheduled for December 6 and 9) includes Carter’s Horn Concerto. 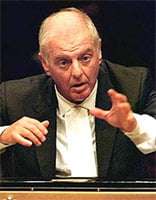 As a momentous and thrilling occasion, nothing on this season’s BSO schedule could possibly top this concert. The centerpiece of the program, Carter’s Interventions for piano and orchestra, was written for Levine and another long-time champion of Carter’s music, Daniel Barenboim. Tailoring his works to the performers who requested them has long been Carter’s custom, and in a program note he says that Interventions “could not be a regular piano concerto because it would not give equal prevalence to both performers.” What Carter came up with is a kind of musical dialogue, in which the participants – solo piano and orchestra – alternately cover extended passages of the score without the other’s participation.

The piece is structured as a single-movement, approximately 15 minutes long, and combines the erudition and playfulness we’ve come to expect in Carter’s writing. Sharply contrasting dynamics, tempos and coloration are highlighted as the impetuous piano repeatedly (and often humorously) cuts into the more lyrical line of the orchestra. Two instrumental trios mediate between orchestra and soloist, and in the closing moments of the piece the two sides finally merge in a huge, fortissimo ending.

Barenboim was superb at the piano, and Levine drew equal eloquence from the BSO players in this first performance of Carter’s zesty musical narrative. At the end, a beaming Carter was helped to the stage, where he applauded all the performers and then joined hands with Barenboim and Levine to bask in the capacity audience’s loud and enthusiastic standing ovation.

The exceptionally generous and wide-ranging program opened gently with a sublime piano duet. Levine and Barenboim teamed up to deliver an intensely poetic reading of Schubert’s F minor Fantasy for piano four-hands. The two pianists (Levine playing bass) were perfectly attuned in an eloquent and sensitively played performance, which on this occasion came across as a kind of birthday serenade for Carter.

Following the Schubert, Barenboim was the soloist in a fresh and exhilarating account of Beethoven’s Third Piano Concerto. His unfailingly strong performance combined vitality and poetry and found a perfect partnership in Levine’s masterful conducting.

The evening ended with a stunningly exciting account of The Rite of Spring. Levine’s conducting was characterized by an extraordinary rhythmic thrust that perfectly captured the wild intensity of Stravinsky’s trailblazing work, the piece that inspired a young Elliott Carter to become a composer.