Part I – “The Capture of Troy”

Part II – “The Trojans at Carthage” 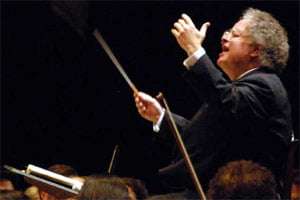 In these unprecedented and unforgettable performances, the final concerts of the Boston Symphony Orchestra’s 2007-08 season, both parts of “Les Troyens” (The Trojans), the grandest of Berlioz’s operas, were performed in a concert version on a single day with a two-hour interval in between.

Both James Levine and the BSO have a long-time association with Berlioz’s music. Levine has led the orchestra in performances of Symphonie fantastique, the Corsaire and Roman Carnival overtures, “Roméo et Juliette” and “La Damnation de Faust”. The BSO also has a long history of recordings and performances of Berlioz’s music with conductors such as Charles Munch, Erich Leinsdorf, Seiji Ozawa and Colin Davis. But Berlioz’s astounding “Les Troyens”, a five-act opera on an astonishing scope and scale, was something different, if not altogether unfamiliar for the orchestra. Except for a few excerpts which the orchestra has performed in Boston and in Tanglewood (most frequently ‘Royal Hunt and Storm’ from Part II), “Les Troyens” is completely new to the BSO repertoire.

James Levine’s conducting history with “Les Troyens” dates back to his 1977 concert performance of Part I with the Cincinnati Symphony Orchestra, and his complete performance of with the Chicago Symphony Orchestra at the 1978 Ravinia Festival. And it was Levine who led the first absolutely complete Metropolitan Opera performances in 1983. This BSO performance was also “absolutely complete” including the entrance music for the builders, sailors and farm-workers near the beginning of Part II, something Rafael Kubelík had omitted from the Met’s first-ever performances in 1973.

Levine’s familiarity and love for Berlioz’s music was apparent from the opening chorus, scored for an accompaniment of only brass and winds. Completely at ease conducting the large-scale performing forces required for this epic opera, he led magnificently executed performances of both “The Fall of Troy” and “The Trojans at Carthage”. Throughout the afternoon and evening, the BSO musicians excelled themselves in virtuoso playing, while the Tanglewood Festival chorus, singing from memory and clearly inspired by Levine, gave an amazingly vivid, unfailingly focused performance.

The soloists were all first-rate. Yvonne Naef was superb as Cassandra. It had been announced that she was suffering from a head cold, but there were no signs of illness in her firm, rich and intense performance. With her soaring first scene aria, ‘Malheureux Roi’, she instantly established her dominance, investing each phrase with unflagging emotional power. Opposite her, Dwayne Croft made a powerful Chorebus.

As Dido, Anne Sofie von Otter was in excellent form and dominated the second part of the work with her vibrant mezzo. The vulnerability she conveyed in her death monologue was incredibly moving. Marcello Giordani was a focused and powerful Aeneas in both Part I and II. He and Otter were well-paired and displayed an exceptionally beautiful degree of refinement in ‘Nuit d’ivresse’, their Act Four love-duet.

While Otter and Giordani understandably stood out as the ill-fated lovers, the rest of the soloists did not disappoint. Stand-outs among the rest of the cast included Kwangchul Youn as a characterful Narbal, Eric Cutler, who nearly stole the show with his refreshingly lyrical rendition of Iopas’s song, Philippe Castagner who gave a beautiful, heart-rending delivery of Hylas’s Song.

This presentation showed the BSO musicians at their finest, more than adequately meeting the challenges of performing this massively scaled work and demonstrating how well a concert performance can convey the epic logic of Berlioz’s masterly setting and hold the listener’s attention from beginning to end.