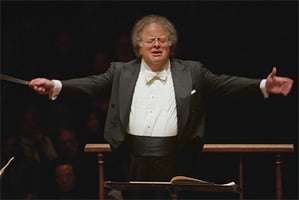 In the Boston Symphony Orchestra’s final visit to Carnegie Hall this season, Music Director James Levine conducted the New York premiere of William Bolcom’s “Eighth Symphony for Chorus and Orchestra on William Blake’s Prophetic Books”. This work, commissioned by the BSO, had its world premiere in Boston on 28 February and then two further performances. Those concerts, and this one in New York, all opened with Schubert’s ‘Tragic’ Symphony, were also to have featured orchestrations (by different composers) of five Schubert Lieder, but owing to the illness of Thomas Quasthoff, the orchestra played Brahms’s Serenade No.2 instead on all except the first date, on which Quasthoff was able to take part.

Although the teen-aged Schubert himself conferred the title ‘Tragic’ on his Fourth Symphony and the work opens rather darkly, it is, on the whole, more genial than woeful. The first movement, typically classical in form, brightened markedly once the violins launched the Allegro vivace exposition. Levine saw the movement through ably, steering it back in the final moments to C major, recalling the unison C on which it opened. His treatment of the lengthy Andante was sweet and gentle, and he captured the unusual rhythmic pulse of the Minuet, contrasting it appropriately with the rather gentle and much more dance-like Trio. The concluding Allegro ran through a gamut of emotions, with the relatively small complement of musicians in excellent form as the symphony made its way back to C major for the last time, closing once again on its original unison C.

The Bostonians, having to select something from recently-played repertory to replace the songs, chose Brahms’s Second Serenade, composed when he was in his mid-twenties. This had the effect of giving the first half of the concert a theme (albeit unintended) of geniality in the youthful compositions of two major composers of the Romantic period. This Serenade is unusual in its being scored without violins, trumpets or timpani. The resulting sound is dominated by rich, low string timbres with the violas excelling as the principal-melody string instruments and the winds providing virtually all of the treble sounds.

The opening movement, in which winds dominate, felt more like chamber-music, but Levine’s sweeping gestures in the ensuing scherzo evoked a bigger and more symphonic sound without losing the movement’s charm. In the third of the five movements a moody atmosphere prevailed at the beginning and end, book-ending dramatic passages for horn and delicate ones for the winds, all above a rumbling ostinato in the low strings. The Quasi menuetto began with a somewhat slow and jaunty rhythm, with winds chirping above the strings, which then played pizzicato in the Trio as the flute and oboe took up the melody. In the finale, most of the instruments took a turn at playing the recurring theme, bringing the work to a bright and lively conclusion. 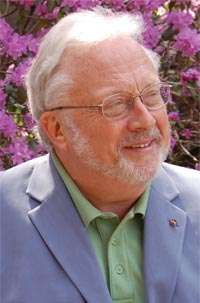 I had the impression during the interval, as the 100-voice Tanglewood Festival Chorus filed onto the stage, that most of the audience were less interested in reflecting on the Schubert and Brahms works than in anticipating the Bolcom premiere. When Levine returned to the podium, he was facing a large orchestra. In addition to full string sections, there were four flutes (two doubling piccolo), pairs of oboes, clarinets (one doubling E flat clarinet) and bassoons, bass clarinet and contrabassoon, six horns, four trumpets, three trombones, bass trombone, tuba, a wide array of percussion instruments for four players timpani, and harp, piano and celesta.

The Eighth Symphony continues Bolcom’s long-time dedication to setting the poetry of William Blake. This work is quite different, however, in both form and style, from Bolcom’s monumental “Songs of Innocence and of Experience”, a magnum opus written over a period of more than 20 years that sets forty-odd lyrical poems in a wildly eclectic variety of musical styles.

The textual material on which the Eighth Symphony is based is poetry of quite a different sort, however. These are Blake’s ‘prophetic’ books – “The Marriage of Heaven and Hell” (circa 1790), “America a Prophecy” (c. 1793), and “Jerusalem the Emanation of the Giant Albion” (c. 1804-1820) – with poetic texts that are almost indecipherably dense with mythological figures, obscure geographical allusions and biblical and other religious references.

The present piece is structured rather like a symphony, with four movements of varying tempos and intensities, but the predominant role of the chorus would suggest that oratorio or cantata would be a more apt description of this work. The Tanglewood Festival Chorus performed brilliantly, and from memory, with accuracy of intonation and marvellously clear diction. The latter virtue was of little practical effect, however, since hearing the words clearly was not nearly enough to enable the listener to have more than the vaguest sense of their meaning. Unlike ‘The Lamb’, ‘The Tyger’ and other Blake lyrics, this poetry requires the reader’s full and careful attention for even a superficial understanding. The audience’s dilemma in this regard was compounded by Carnegie Hall not distributing the texts with the concert programmes, apparently owing to a failure to realise that they were in the same booklet as the Schubert texts that Thomas Quasthoff’s cancellation had rendered superfluous. Ushers ran through the Hall with the booklets just seconds before the performance began and never reached some portions of the audience.

The symphony starts with a loud, sharp crack, as if a starter’s pistol had sent the music off and running. The first movement, ‘Rintrah roars’, was appropriately suggestive of roaring; there was much percussion and much dissonance in the orchestral passages, but the vocal music is generally more tuneful although still quite chromatic. Five members of the chorus contributed solo passages from time to time throughout the work. As the second movement, ‘The shadowy Daughter of Urthona’, began, the chorus virtually spoke the text with only percussion accompanying. The strings and then the rest of the orchestra later joined the chorus, which in the concluding section of the movement was quite melodious and harmonized.

The third movement, ‘This theme calls me’, which has the slowest tempo, begins with winds and vibraphone introducing a tenor solo. The text calls on England to awaken spiritually and is followed by the orchestra’s return to the opening passage. The text of the last movement, ‘A Song of Liberty’, is a prose-poem that Blake appended to “The Marriage of Heaven and Hell”. It consists of a series of numbered verses that do not flow continuously from one to the next, with each standing more or less alone. Bolcom’s setting of the movement reflects the independence of these lines, varying in style from one to the next.

The concluding section is an extended and glorious setting of a single Blake verse, “For every thing that lives is Holy”, first by the women, and then joined by the men, repeated several times with the horn and strings taking up the theme and the brass entering to provide the bass line. The sonorities – both vocal and instrumental – spiralled higher and higher, with consonant harmonies of a sort that had been heard very little of earlier capping the work off with splendour. As beautiful as this ending is, it struck me as a sort of trick perpetrated on the audience, inviting us to set aside recollections of the often-dissonant and atonal passages and obscure texts that previously dominated and take a simple message and a splendid tune into our collective consciousness. The composer was present to acknowledge applause.