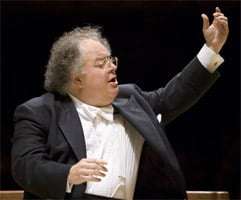 The Boston Symphony Orchestra has changed much for the better in the last four years. Certainly it was a solid orchestra under its previous music director, Seiji Ozawa — but James Levine, now well into his fifth season as, has cultivated a more euphonious sound without sacrificing the distinctive sonorities of instrumental groups, as well as a less aggressive string sound that still manages to put out an impressive volume of sound when needed. The brass section has also benefited under Levine, its formerly astringent timbre replaced with a sound that is rounder but still bright when necessary, and amazing dynamic range — including some of the most satisfying sound in the lower depths of the dynamic range I’ve heard in a long time.

Levine, who has been battling back against illness on multiple fronts, was more animated on the podium than I have seen him in over a year. He still conducts from a chair, yet seems to exude even more energy than he did a decade ago, throwing cues with more force than conductors half his age.

That being said, the opening piece — Tchaikovsky’s ‘Pathétique’ Symphony, which is usually the featured work when it is programmed rather than a curtain-raiser — came off as a bit bloodless, despite some outstanding playing. The introduction to the first movement didn’t have an atmosphere of ominous mystery, the low strings almost too warm and solid. Levine adopted a faster-than-expected tempo for the ‘big theme’ that undercut the lyricism of one of Tchaikovsky’s most beautiful melodies. The vehement, rapid-fire music of the central Allegro vivo was far more satisfying — showcasing the BSO’s superb balance and precision — but the big climax seemed rushed.

In the second movement ‘Waltz’, Levine seemed to hearken back to the sort of phrasing one would have heard a couple of generations ago — for example, slightly stretching the first beat of each phrase’s final measure in the primary theme — and the judiciously controlled dynamics brought out counter-melodies to satisfying and revealing effect. The third movement ‘March’ betrayed a bit of ragged string-playing at the opening, and the tempo seemed a little uneven going into the second tune, but the brass playing — despite a few clinkers — was thrilling by virtue of nuanced dynamics and phrasing. Levine was a bit freer with tempos in the finale, the soft-edged attacks from the strings and winds lending added poignancy to the music; although climaxes seemed a but reined in, the final coda was haunting and very effective.

Leon Kirchner first came to prominence as a pianist in the late-1940s, but is most known as a composer. The Forbidden is the orchestral realization of his Piano Sonata No.3 (also entitled The Forbidden, which the composer has further recast as a string quartet). The title is an allusion to a passage from Thomas Mann’s “Doctor Faustus” that deals with harmony, chromaticism and what is ‘forbidden’ in tonality. The work itself is highly chromatic but never wanders far from diatonicism; its orchestration bears more than a passing resemblance to that of Alban Berg, and the episodic form and phrasing is strongly reminiscent of the late, tonal music of Arnold Schoenberg. The thickly scored first section leaves little room for respite; the slower second section, predominated by strings, showcased the sheen of the Boston Symphony’s players; the final section, in an animated triplet tempo, contains some of Kirchner’s most playful and engaging invention. The orchestra — and composer — received a deservedly rousing ovation.

Robert Schumann’s Piano Concerto may have been intended as a bravura work to showcase his wife Clara, but it also presents interesting possibilities and challenges, particularly due to the contrast between its brooding, passionate first movement and the playfulness of the second and third.

Maurizio Pollini, who will be celebrating the 40th-anniversary of his Carnegie Hall debut on October 26, opted for an interpretative approach to the first movement that was at strong odds with his reputation for restraint and even aloofness, plumbing the depths of the music’s forward-looking expressiveness while lending unusual transparency to the music’s more thickly-written passages. Pollini brought fleet, sleek character to the work as a whole, which paid sizeable musical dividends in the second and third movements.

Levine followed Pollini’s lead — often nearly facing Pollini from his chair — and maintained a superb balance between soloist and orchestra, which almost perfectly mirrored Pollini’s phrasing and expressiveness. The finale straddled the early Romanticism of Mendelssohn and Weber, the intimacy of the period’s musical salons and the virtuoso orchestral concertante showpieces of the late-19th-century. It was the polar opposite of the uneven Tchaikovsky that had opened the program, a performance that was involving from the first staccato orchestral explosion to the final note and brought out the best in both soloist and orchestra.