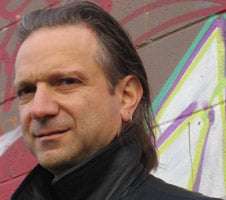 Unusually for a Saturday night subscription concert, Symphony Hall was less than two-thirds full, many of the habitual attendees no doubt choosing instead to watch the Red Sox in their American league playoff game with the Cleveland Indians. Those who attended the concert were well rewarded in a program that celebrated local connections and offered a rare opportunity to hear Symphony Hall’s recently refurbished organ in all its splendor.

Boston-based composer Michael Gandolfi’s The Garden of Cosmic Speculation is a second set of “impressions” inspired by architect Charles Jencks’s book of the same name. The book is an extensive photo essay about Jencks’s thirty-acre private garden in Scotland. The garden attempts to depict a wide range of concepts from modern physics, mathematics and cosmology, from the most fundamental (quarks), to the most complex (the structure of the universe). Gandolfi’s work is a musical response to Jencks’s designs and the scientific and mathematical theories that inspired them.

Gandolfi wrote his first set of “impressions” in 2004 on a commission from the Tanglewood Music Center, the summer home of the BSO. Since the orchestra’s first-performance of the four-movement work (called Impressions from the Garden of Cosmic Speculation) in January of 2005, the composer has expanded the piece and shortened its title. On a commission for the Atlanta Symphony Orchestra, he wrote seven more movements for performances that took place in May 2007.

Gandolfi’s concept of his suite is open-form. A conductor may choose to include any number of movements and program them in any order, to create a personal path through the musical “garden”. This concert featured four movements: numbers 10, 8, 6 and 9, which together lasted about 20 minutes.

The movements of the piece are more than mere musical pictures of Jencks’s garden. They serve as audio representations of the scientific and mathematical ideas that inspired the architect’s designs. For example, ‘Fractal Terrace’ is a literal depiction of fractals and their manner of operation: recursive operations on dramatic and complex shapes or sets of numbers.

Gandolfi’s deftly orchestrated music is filled with vivid, visceral effects, and offered many opportunities for the BSO players to display their virtuosity. ‘The Quark Walk’ offered a series of supercollider-like bursts from the piano, each followed by rapidly spinning patterns in the strings. ‘Fractal Terrace’ is a colorful mosaic of rapidly shifting musical patterns. ‘The Universe Cascade’ opened literally as well as metaphorically with a “Big Bang” and traced a timeline through history via an eclectic series of musical quotations from repertoire stretching from the early Renaissance to present-day jazz and pop, all played in chronological order. ‘The Jumping Bridge’ is bold and quirky, incorporating varying levels of syncopation with rapidly shifting meters and textures. Robert Spano, a champion of Gandolfi’s music (he conducted the New World Symphony Orchestra’s world premiere performance of the complete, eleven-movement work last April), and the BSO players delivered a persuasive, sprightly account. The composer’s appearance was greeted with sustained and enthusiastic applause.

A sumptuous and spacious account of Poulenc’s Concerto for Organ, Strings and Timpani (1938) featured the wonderful English organist Simon Preston at the console. Preston’s strong virtuoso performance was exhilarating, with the orchestra contributing wonderfully elegant, rich sounds. Timothy Genis was the timpanist.

After intermission, Tchaikovsky’s ‘Pathétique’ received an emotionally powerful performance, in which the BSO string-playing was again peerless. Agonized intensity was the keynote in this passionate treatment, which generated plenty of excitement, both on the podium and among the audience.