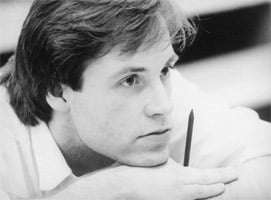 This concert, part of a series marking the Boston Symphony debut of Markus Stenz, the general music director of the city of Cologne, opened with Mozart’s Symphony No.1 (this subscription week has offered the BSO’s first-ever performances of the piece), probably written when the composer was only eight years old. While the work is has some energetic and charming moments, it is of less musical than historic interest, and there was a suspicion of routine in this less than electrifying performance.

The excitement picked up when Frank Peter Zimmermann played The Lost Art of Letter Writing, a work for violin and orchestra, recently written for him by the Australian Brett Dean and receiving its American premiere in these performances. The title is a reference to the commonly heard complaint that in the age of email, text-messaging and cell-phones, people no longer write letters. The four-movement concerto, co-commissioned by the Cologne Philharmonie and the Stockholm Philharmonic, was inspired by excerpts from four different 19th-century letters of varying genre, ranging from private love-letters to a public manifesto.

The darkly brooding first movement, at about thirteen minutes, is the longest in this weighty, mostly somber work that lasts a total of about thirty-five minutes. Dean explains that the movement’s title ‘Hamburg, 1854’ refers to the romance between Brahms and Clara Schumann, and that the music itself relates to aspects of Brahms’s own works, including the slow movement of his Fourth Symphony and his early Variations on a Theme of Schumann. The expansive second movement, ‘The Hague, 1882’, is inspired by a letter from Vincent van Gogh reflecting on the importance of the beauty of nature as a constant in his otherwise unbalanced life. Similarly, the letter by Hugo Wolf that inspired the brief third movement, ‘Vienna, 1886’, is a candid reflection on a tormented life. The final movement was inspired by the ‘Jerilderie Letter’ written by Australian bushranger Ned Kelly pleading justice for impoverished Irish settlers in colonial Australia. 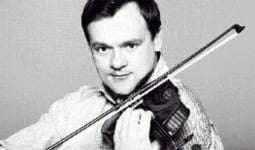 Zimmermann gave an impassioned performance of Dean’s work and was in complete command throughout the impressive performance, with Stenz and the BSO musicians in perfect synchronization. While Zimmermann’s approach to the music was unsentimental, there was no lack of feeling in his vigorously expressive and technically brilliant account that brought out all the color of the piece.

After the intermission, Zimmermann returned and delivered a lithe and glittering performance of Mozart’s Second Concerto. He displayed magnificent poise and beauty of tone, along with a seemingly effortless technical command. The opening movement was vigorous and fresh, the Andante affectingly phrased, and the finale displayed a wonderful gracefulness and lightness of touch. Stenz drew intensely animate playing from the orchestra in an accompaniment that proved the perfect setting for Zimmermann’s splendid performance.

The concert closed with a robust and beautifully shaped reading of Schumann’s Second Symphony, in which Stenz conveyed a strong sense of purpose from beginning to end. Richly impressive with superb wind- and string-playing, this was a memorable performance with much engaging detail and a deeply felt slow movement.