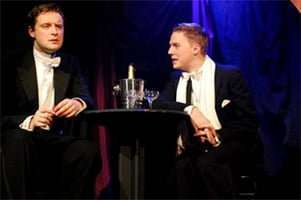 The delightful show is thirty-seven years old. It was successful off-Broadway in 1975 but never came to London. In 1986, when Stefan Bednarczyk found a recording of the show, he was determined to bring it to the capital. At the time, musicals with a gay theme were not popular – it was the height of the AIDS epidemic. Further on, Boy Meets Boy finally gets to play London. What a treat we have been missing. Although AIDS now rarely makes the front pages, nowadays most people realise that it is not a gay plague but an infection rife in every branch of society.

Without ignoring the situation, it is still possible to enjoy Boy Meets Boy, which is as innocent as a Fred Astaire-Ginger Rogers musical or as daffy as Sandy Wilson’s The Boy Friend, his evergreen pastiche of 1930s’ Broadway shows – all set in a world of their own, as is Boy Meets Boy, where nobody frowns at two young men having a romance. 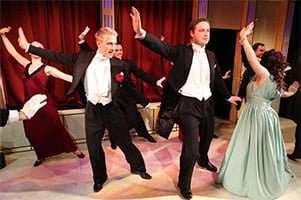 The writers have set the show in 1936, the age of jazz and razzamatazz, and when screwball comedies were popular. The delicious story is set in London at the time of the Abdication crisis. US journalist Casey O’Brien misses the story having been the worse for drink and instead follows the hot news in high society, the forthcoming wedding of Boston millionaire Clarence Cutler to English aristocrat Guy Rose. O’Brien falls for Guy who presents himself as a nerdy, specs-wearing silly ass, instead of the society beauty he really is. It all sounds like a Fred and Ginger plot, except for the two males. Many uproarious events take place before wedding bells are heard, an amusing and adventurous path taken before the church is reached, via the Savoy Hotel and the Paris Folies.

If the music sounds something like Rodgers & Hart or Cole Porter or even Noel Coward, it is because Bill Solly and Donald Ward have written some splendid pastiche songs, ‘Giving it up for love’, ‘The English rose’, ‘Marry an American’ and ‘It’s a dolly!’ For the Folies scene there’s a song simply caused ‘Paris’ sung by a lookalike Josephine Baker. There’s also a marvellously funny duet for Casey and Guy, ‘It’s a boy’s life’, which details the experience of being a boy scout. All are performed by a well-drilled ensemble that packs the tiny Jermyn Street stage with more vitality than the West End has seen in ages.

The leading roles are played out with conviction. Stephen Ashfield as Casey is on form as the hard-boiled correspondent looking for the love of his life. Craig Fletcher as Guy, has a touch of Shakespeare’s Viola about him as he jumps from raving beauty to gawky geek and Ben Kavanagh’s jilted lover Clarence is all at sea as he finds his impending nuptials doomed. Jonjo Flynn contributes a nice line in philosophical advice in the best-friend part of Andrew, a sort of Eve Arden-meets-Iago figure.

Bednarczyk plays with relish. Lee Proud’s choreography manages to make a baker’s-dozen of performers seems like an endless terpsichorean chorus line. Gene David Kirk directs with panache (in sadly his last production at this address) and it’s all set against Alice Walkling’s beautiful designs and sprucely luscious costumes. What a pre-Christmas treat this is.