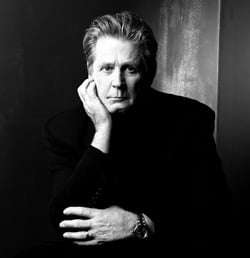 It is a measure of the degree to which Brian Wilson’s live appearances – both in general and at the Royal Festival Hall in particular – have become a regular occurrence such that the man himself took the stage for the third of this week’s concerts with an almost ‘business as usual’ casualness. Yet the 100-minute set that followed was nothing if not representative of the consistent quality that this most unassuming of legends has maintained in what, incredibly, is near on a decade of live performance.

All this by way of saying that if this concert had a different feel from the euphoria of 2002’s “Pet Sounds Tour” or the sheer anticipation of 2004’s “Smile Tour”, it was no less satisfying as music-making. 65 though he may be, Wilson is clearly intent on avoiding a ‘greatest hits’ package; the first half featured welcome selections from the “Today” and “Summer Days and Summer Nights” albums – overshadowed by “Pet Sounds” they may be, but hardly less significant in Wilson’s evolution from hit-maker to innovator.The teenage angst of ‘Girl Don’t Tell Me’ was followed by the sparkle of ‘Dance Dance Dance’, with the (ironic?) heartiness of ‘Salt Lake City’ a foil to the evergreen ‘And Then I Kissed Her’. A soulful ‘Surfer Girl’ recalled the beginnings of Beach Boys history, before a sneak preview of the second half made way for the effervescent ‘Do You Wanna Dance?’, the earnest ‘When I Grow Up To Be A Man’ and poetic ‘She Knows Me Too Well’ – still an integral part of the soundtrack to adolescence after four decades.

A glowing take on ‘In My Room’ was framed by the quizzical charm of ‘Busy Doing Nothing’ and a version of ‘Do It Again’ that ‘rocked’ like it always should but seldom does. A highlight of the previous tour, ‘Sail On Sailor’ retained all its exhilaration, while the easy swing of ‘California Girls’ never fails to please. A “Pet Sounds” trilogy of ‘Wouldn’t It Be Nice?’, ‘Sloop John B’ and ‘God Only Knows’ evinced subtle changes in arrangement to confirm a band anxious to avoid falling into routine. ‘Heroes and Villains’ was heard in the ‘Part One’ version finalised on “Smile” (can any other classic track have gone through this many incarnations?), but ‘Good Vibrations’ resorted to the single version – albeit with a neatly extended take on ‘Gotta Keep…’ just before the end – to bring the first half of the evening to its resounding close.

Throughout, the 10-piece band was on the expected form – with familiar faces such as Jeffrey Foskett, Darian Sahanaja, Probyn Gregory, Nick Walusko, Taylor Mills, Paul Mertens and Scott Bennett providing musicianship so that Wilson had the space for a vocal contribution which, while occasionally ragged, has a conviction remarkable for one who spent much of his career avoiding concerts.

It was with Bennett that Wilson co-wrote the centrepiece of the current tour. Inspired by a favourite spiritual, “That Lucky Old Sun” (commissioned by the Southbank Centre) is a nine-part, 35-minute song-cycle whose numbers play continuously or are linked by quirky narratives penned by the inimitable Van Dyke Parks. The overriding theme is one of nostalgia for the Southern California of Wilson’s youth, and the events and people encountered along the way. Brief montages of film and video imagery provide a context for music that, though it eschews the intensity of “Smile”, is assured and has enough substance to banish any thought of creative marking-time. The generosity of ‘Morning Beat’, the catchy ‘Mexican Girl’, the autobiographically tinged ‘Midnight’s Another Day’ and the verve of ‘Southern California’ (enhanced by its unexpected but touching coda) can rank with the best that Wilson has penned in the two decades since his return to song-writing, and may well find a place in future live sets – though it could be the whole of “That Lucky Old Sun” will prove greater than the sum of its parts. Certainly the sequence bodes well for Wilson’s new album, due out in the coming months, and which seems likely to be his finest ‘solo’ offering yet.

After each of the band had been introduced by the previous member on returning, the finale came in the guise of the ‘rock and roll’ medley that can always be relied upon to bring the house down. A sparky cover of ‘Johnny Be Good’ set the tone for the usual suspects – ‘I Get Around’, ‘Help Me’ Rhonda’, ‘Barbara Ann’, ‘Surfin’ USA’ and ‘Fun Fun Fun’ – which benefit from the sheer cumulative velocity generated here. Wilson emerged from behind his keyboard to take up bass guitar in the numbers he played live with the Beach Boys in those heady early days. Audience response was suitably ecstatic.

A last surprise in a cover of The Beatles’ ‘She’s Leaving Home’ that has proved not to everyone’s liking, but whose perky take on the verse made the lilting chorus more affecting. By paying homage to his biggest rivals and keenest admirers, Wilson underlined that great song-writing is always at a premium. Hopefully his contribution, and his willingness to take it before the public, is far from over.