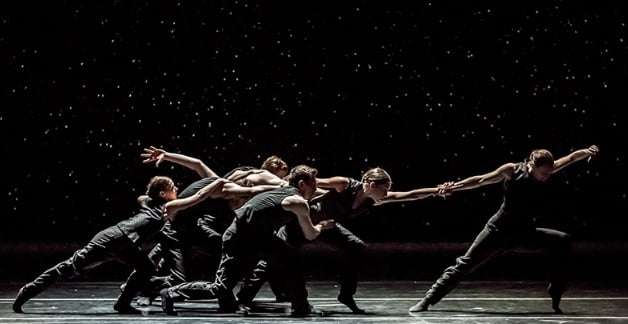 In the dance world currently, having a work by Canadian choreographer Crystal Pite is something akin to having a golden Ticket to Willy Wonka’s factory. And so it proves with sell-out houses for British Ballet Columbia’s first UK appearances at Sadler’s Wells before a country-wide tour. And, in the context of this satisfying triple bill, one can confirm that there is ample reason behind all the fuss, for, despite the qualities of its two companion pieces, her Solo Echo stands on a different, altogether higher level. This is a medium-scale contemporary company, led by the doughty Emily Molnar, comprising alive and alert artists who not only work together with impressive cohesion but also display individual qualities which some companies would have sought to supress. They move in a resolutely contemporary way, but classical ballet training underpins their physicality, giving them a welcome versatility – they combine earthiness with an ability to spin and leap cleanly, equally happy on the ground as in the air. Body shapes, as if often the case, are more varied than in a classical troupe, and this too allows for individuality within the uniformity of ensemble movement.

16+ a room is a work from Molnar herself, a half-hour riff on the shifts of random meetings and groupings. Dirk Haubrich’s electronic score is insistent and matched with consistently inventive movement, the dancers often skidding into position (the men are in socks, the women in pointe shoes). Partnering in the ever-changing combinations is secure and strong, while the dancers clearly relish the quick-slow-quick nature of the choreography, whipping legs around only to pause as if frozen in time. This elastic quality to the movement and the dancers themselves is satisfying, a deft combination of several elements including William Forsythe (Molnar danced with the choreographer’s Ballet Frankfurt). With dancers clad in dark costumes performing in a black box, lighting was crucial and Jordan Tuinman’s design brought welcome and deft contrasts, from side lighting to spots to full-stage wash. 16+ a room is a cool piece, cold even, with little humanity inherent in the movements or emanating from the performers, but as an opening work in a mixed bill, it works.

Sharon Eyal provides Bill, definitely a closing piece, given its quirky, often frivolous qualities. The mood is set by Ori Lichtik’s music which, at the outset at least, is characterised by a heavily rhythmed jauntiness. Initially a series of awkward, gawky solos for men in pale long-sleeved unitards, it raises a smile, as these impressive dancers contort their bodies into Eyal’s increasingly bizarre shapes and forms. Things change with the arrival of both women and also greater numbers, the focus shifting to mass jerky, twitchy repeated movements against which Eyal places counterpoints of small groups or an individual who seem to work against the flow. The levity evaporates and a heavier, almost more ominous atmosphere descends.

Sandwiched between the two Solo Echo, originally made by Pite for Nederlands Dans Theater, possesses a humanity at its core which takes the piece onto another plane. Pite is known for her expert ability to greater group movement and she does not disappoint in this work, the seven dancers seemingly linked to each other, every pull or push rippling through the others. Darkly-clad dancers in another black box perform in front of falling snow, the solos, duets and groupings quirky, searching, yearning, shot through with a subtle melancholy. Pite’s choice of music, recordings of sections from two Brahms’s cello sonatas underpins the lyricism with which she manages to infuse her resolutely contemporary choreography. BBC’s dancers respond magnificently to the physical and emotional challenges presented by this work and excel in it, creating a compelling and moving episode, never more so than when each dancer holds the next in his or her arms only for each to drop away one by one, leaving a single man in a crumpled heap in the snow.