The Wigmore Hall’s celebration of Benjamin Britten’s centenary (which falls in November next year) continued with the five Canticles, the religion-biased works that range in scale, all of them closely connected to the operas he had been or was currently involved with. I wonder what Britten would have thought of them being performed as a sequence, taking us from just after Peter Grimes to the period between Death in Venice and the composer’s own passing in 1976. They are Britten at his economical best, with the extreme refinement of his style laid bare. For a composer famed for his supernaturally tuned ear, not a note goes unheard.

Britten’s choices of texts – some of them, you’d think almost too elusive for setting and all of them rich in imagery – result in music of great immediacy and, paradoxically, even greater mystery. I wonder, too, what Britten would have made of the non-chronological running order that placed the lacerating darkness of the final Canticle at the centre of the group and ended with his setting Edith Sitwell’s Passion-like Still falls the Rain.

There must have been many in the audience who would have heard Peter Pears singing these works, which Britten wrote specifically for him. Mark Padmore possessed the music with a similar intensity. A fixed point in all five, he not only performed with a directness that went to the heart of each one, he also made Britten’s rapport with his texts seem disarmingly natural. 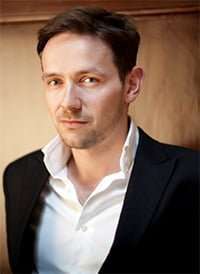 Padmore adopted a confiding, almost conversational tone in My Beloved is Mine (1947, poem by Francis Quarles) that enhanced the mystical/erotic passion of this most unequivocal of love songs. He led the drama of Abraham and Isaac (1952, text from the Chester miracle plays) with a barely contained ferocity, and he and Iestyn Davies were spellbinding in the homophonic duetting as the voice of God, both singers turning their backs on the audience and singing into the piano, an eerie effect that made the voice-blend even more seamless. Davies was superbly responsive, his ravishing countertenor thickening to great effect as Isaac begins to twig what his father has in store for him.

Lucy Wakeford reminded us of Britten’s devastatingly original writing for harp in the setting of T. S. Eliot’s The Death of Saint Narcissus (1974) in playing that completely got the point of the harp’s tenuously suggestive role – she was the perfect partner for Padmore’s accumulative revelation of the dark, uneasy eroticism stealing through the music and the poem. There was a pregnant stillness, reminiscent of music in The Rape of Lucretia, which set up the ambiguity of Journey of the Magi (1971, Eliot again), Padmore joined by Davies and Marcus Farnsworth as the three wise men left none the wiser by the miracle they have witnessed. The ensemble was terrific, and the separation into character equally effective, with Farnsworth’s agile and attractive voice agreeably relating to the dark area of Padmore’s tenor. The atmosphere they created was impressively leaden and mysterious.

In Still falls the Rain (1953), Richard Hawkins’s horn-playing defined the bleak oppressiveness of Britten’s setting of Sitwell’s equally bleak poem (The Canticle of the Rose). At the end of an hour of such emotional compression, Padmore surpassed himself, his singing flowing from florid Purcellian melismas to the startling break into Sprechgesang with rare ease and authority.

Julius Drake’s playing was remarkably fine and intuitive, and totally in charge of Britten’s almost onomatopoeic evocations of music and character. He showed us how Britten’s settings tease meaning out of the verse that the writers may well not have been aware of, and every detail of response and attack defined the complex, three-dimensional, active-passive balancing act of the so-called accompanist.